Dr. Fauci Admits His Mask Wearing Stance Two Months Ago Was All About Optics

What Else Did He Lie About Because Of Optics? 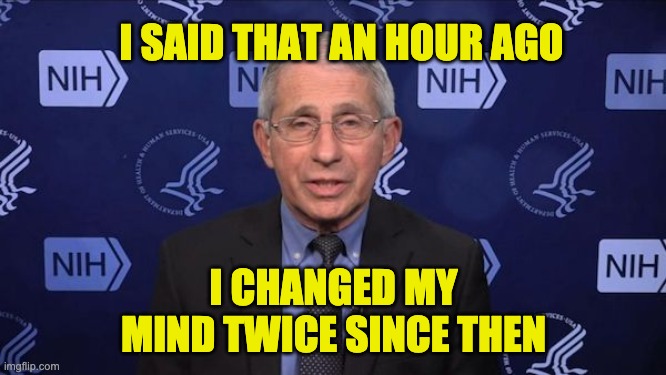 Media darling Dr. Anthony Fauci whose words are treated as if they were scripture handed down from heaven, has flip-flopped again, but at least this time, he was honest about it. Fauci has completely reversed his position on mask-wearing for people who are vaccinated for the coronavirus–and admitted that his original position was all about optics.

Despite his claim that he got to his new position because of The Science™ — it isn’t. Dr. Anthony Fauci, the prevaricating authoritarian holy smurf, has flip-flopped on the “data” and “The Science™” regarding mask mandates and “mitigation” measures. Despite being on the Coronavirus Task Force and, therefore, one of the closest people in the loop on the development of vaccines, he didn’t believe that a vaccine would be “widely available” until…right about now.

Here is Saint Fauci on Good Morning America admitting that his post-vaccine mask-wearing was, in fact, theater. He says, “I didn’t want to look like I was giving mixed signals but being a fully vaccinated person, the chances of my getting infected in an indoor setting is extremely low.” [Note: I am not a doctor, I disappointed my Jewish parents, but isn’t that the reason for getting a vaccine?]

Dr. Fauci admits his wearing masks indoors despite being vaccinated was based on imagery, not science:

"I didn’t want to look like I was giving mixed signals but being a fully vaccinated person, the chances of my getting infected in an indoor setting is extremely low." pic.twitter.com/UdJdhHvoR0

And here is Saint Fauci arguing with Senator Rand Paul(R-KY) exactly two months ago to the day that mask-wearing after vaccination is not theater. “Masks are not theater. Masks are protective,” says Fauci adding, “I totally disagree with you.”

Fauci’s ultimate rebuttal: “I totally disagree with you” pic.twitter.com/Ea0utSRUAb

So is Dr. Fauci saying it’s okay to lie to the U.S. Senate, but one must be honest with GMA host/former Bubba Clinton Press Secretary George Stephanopoulos?  Maybe he just doesn’t like Senator Paul. We know that the late John McCain didn’t like him—in fact, that’s one of the reasons I like Senator Paul.

Meanwhile, back in May 2020, Saint Fauci tells CNN’s Jim Sciutto that he wears a mask as a “symbol” of what you should be doing.

Fauci on masks: "I want to make it be a symbol for people to see that's the kind of thing you should be doing." pic.twitter.com/P5NHF8CC1I

What an evolution! From “it’s a symbol” to “it’s not theater” to “yeah, actually, I did it for the optics.”

Isn’t it nice to know that Dr. Fauci and The Science™ have finally caught up to what Senator Rand Paul was saying in March?

This raises the question of what else did he lie about?

Now, we just need to get Fauci on the record on why people who have had the virus and recovered are not counted with the vaccinated towards the “herd immunity” goal. That would certainly be interesting!

We also need Sen. Paul to get Fauci to admit he lied about the National Institutes of Health funding “gain of function” research by the Wuhan Institute of Virology via a third party. Then we could finally figure out how COVID became a pandemic and prevent it from happening again.