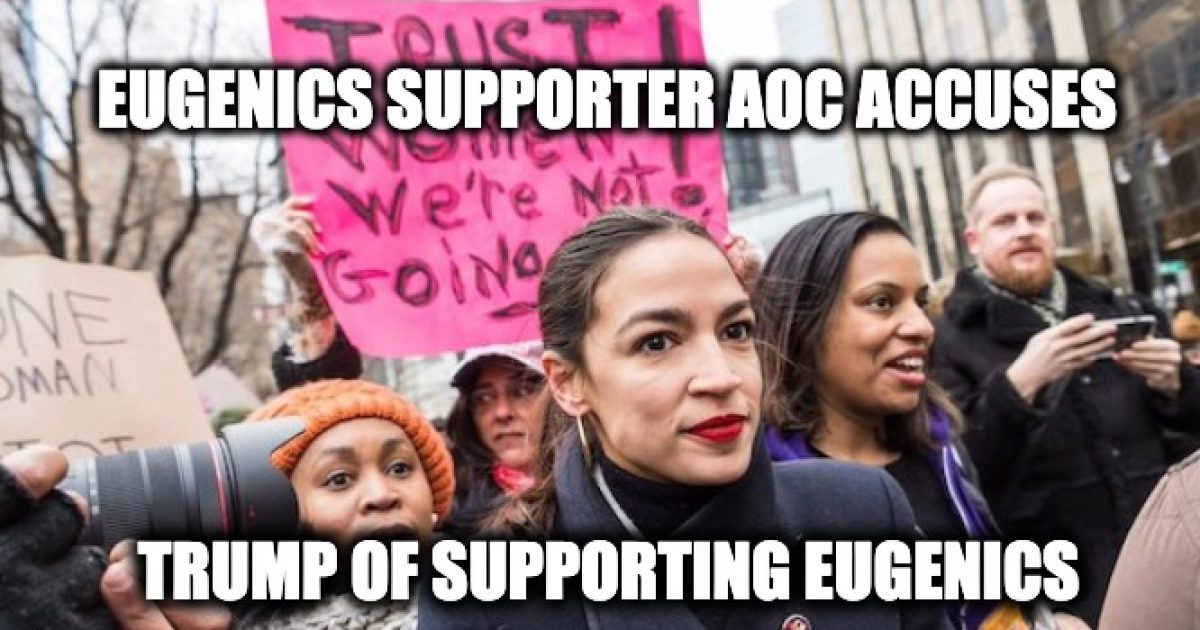 Alexandria Ocasio-Cortez accused President Trump of supporting eugenics. But its AOC who is a eugenics supporter. The socialist darling of the Democrat party, known for reprehensibly comparing ICE detention centers to concentration camps, made the controversial comments during an interview with Yahoo News earlier this week.

In one particular email, Miller suggested the idea of a complete ban on immigration “like Coolidge did,” which the New York Times incorrectly claims is a link to a 1924 law “seen today as a symbol of bigotry and was heavily influenced by the eugenics movement.”

“I think the most clear and disturbing of them all is the fact that Stephen Miller has just been exposed as frankly a neo-Nazi and a white supremacist,” Ocasio-Cortez falsely claimed.

Just like AOC to call a Jew of being a Nazi.

“He was citing eugenics as the rationale for our policy in the southern border and Donald Trump clearly thinks that – clearly believes in eugenics – given the fact that he has put and maintained Stephen Miller in a position of power after these revelations.”

Truth be told If anyone believes in Eugenics it is AOC. After all, she supports Planned Parenthood.  People forget the founder of Planned Parenthood Margaret Sanger was a white supremacist who created the organization for eugenics, a sick belief that the human “gene pool” would be improved through selective breeding and sterilization. In Sanger’s case improving the gene pool meant keeping African-Americans, morons, those with a family background having a history of illnesses and other undesirables from reproducing. She also advocated strict immigration rules to keep the “undesirables’ out of the country.

Planned Parenthood seems to be following in the tradition of its founder.

“The leading cause of death in the African-American community is not gang-violence, gun violence, heart attack, stroke, HIV, high blood pressure, diabetes. People will name all these. No, it’s abortion. And the reason we have come to that conclusion, statistically, you’ve got 60 million-plus abortions legal in America since 1973. About a third of those occur in the African-American community. That means dead babies. And, with us being 13 percent or less of America’s population, that means we are having more abortions.”

She asked, “Now does it mean that African-Americans are more immoral or don’t care? Absolutely not. We are just regular, everyday people like everyone else. But Planned Parenthood moved into our community with the abortion killing centers and said, ‘We’re here to help you. Let’s kill your baby so you can have a better life.’

Perhaps Ocasio-Cortez was too busy concocting lies and smearing the President as a man who supports eugenics to do her own research.

Had she done so, she may have discovered that the person she endorsed in 2020, Bernie Sanders, has espoused using population control and abortion as a means to combat global warming.

When asked at a Town Hall earlier this year if he would support measures to curb population growth, including abortion which disproportionately affects black communities, Sanders was a fan.

“The answer is yes and the answer has everything to do with the fact that women, in the United States of America, by the way, have a right to control their own bodies and make reproductive decisions,” he claimed.

Even a vacant-minded CNN pundit recognized the comments for what they were.

Let’s just state for the record: talking about needing “population control” through ABORTION for the sake of CLIMATE is talking about EUGENICS. The fact that @BernieSanders is willing to entertain this vile idea is not only disgusting, it should be disqualifying.

Using AOC’s logic, this is clearly another example that she supports eugenics.