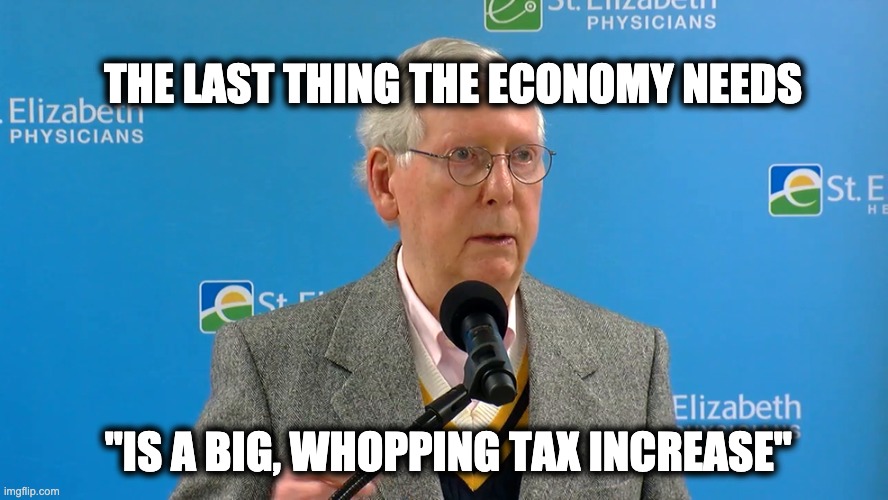 Didn’t Biden say he was going to try and unite the country?  He also said that he maintained a good working relationship with Mitch McConnell. This, people believed, would allow there to be some compromise in Congress—WRONG! As the saying goes, “you need two to Tango,” and Joe Biden ain’t dancing. economy-killing infrastructure plan.

McConnell reacted to Biden’s partisan infrastructure plan laden with major tax increases with a promise to “fight them every step of the way,”

Mitch McConnell on Thursday ruled out support from his Republicans for President Joe Biden’s new infrastructure plan, all but ensuring that the proposal will have to pass with lockstep Democratic unity in the Senate.

At an event in Kentucky, the Senate Republican leader pilloried the $2.5 trillion infrastructure proposal as exacerbating the debt and raising taxes. McConnell said the bill would not get a single Senate GOP vote, despite the White House’s bipartisan outreach.

“That package that they’re putting together now, as much as we would like to address infrastructure, is not going to get support from our side. Because I think the last thing the economy needs right now is a big, whopping tax increase,” McConnell told reporters.

McConnell added, “It’s like a Trojan horse. It’s called infrastructure, but inside the Trojan horse is going to be more borrowed money and massive tax increases on all the productive parts of our economy.”

Of course, Biden could force the plan through Congress via reconciliation, allowing the Democrats to enact tax legislation with just 51 votes in the Senate. That was done to pass the recent Pork-A-Rama COVID relief bill.

The biggest challenges Biden faces could come from Democrats. So long as he has every single Democrats’ vote plus the tie-breaking vote of VP Kamala Harris as well, the monstrous bill will pass—but if one Democrat stands up against it…

Given the way things have gone since Biden moved into the big white mansion on Pennsylvania Ave., it’s time to fasten our seatbelts because McConnell’s opening slam is just the beginning of a huge fight to try and save the country