When Will Durham Investigate John McCain?

Will John Durham Investigate The Person Who Gave The Dossier To The FBI? 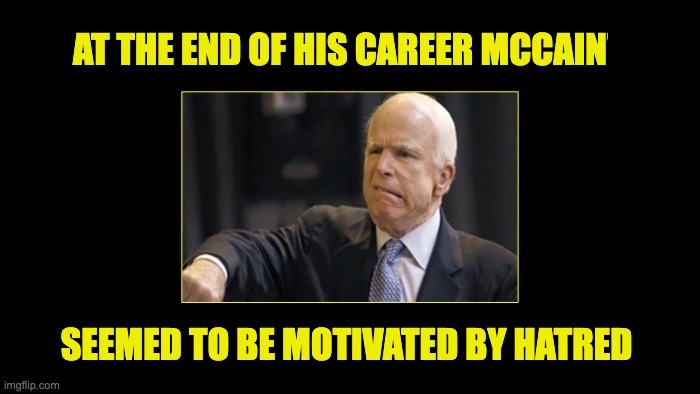 While discovering the roots of the hoax surrounding the Steele Dossier, will John Durham investigate the person who gave the dossier to the FBI, the late U.S. Senator John McCain? We don’t know who gave McCain the dossier. How did that person get it? Did McCain know it was a fraud when he handed it over to the FBI and started the Russiagate scandal? America needs to know the answers to these questions.

Even though he is still in the middle of his investigation, we know that Durham has looked into how the fake dossier was written and that the FBI used the dossier to get warrants allowing him to spy on the Trump campaign. There is so much in-between and afterward for him to investigate. But there is one other thing we know for sure: John McCain gave the FBI the fake document. John McCain said so.

Yep the FBI Russiagate investigation was all John McCain’s fault.  In his book, “The Restless Wave,” McCain (R-AZ) confirmed that he was the person who gave the FBI Director James Comey the bogus dossier.

“I said I didn’t know what to make of it, and I trusted the FBI would examine it carefully and investigate its claims. With that, I thanked the director and left. The entire meeting had probably not lasted longer than ten minutes. I did what duty demanded I do,” McCain concludes. Like he is on so many other points McCain is wrong.  The FBI used McCain’s dossier as part of the evidence given to a FISA judge to start the investigations/wiretaps regarding the Trump campaign, they never told the judge that it was written for the Clinton Campaign as opposition research against Trump.

Just whom did McCain get the dossier from? Danchenko? Clinton? Who? He never said who it was. Perhaps he was in on the scam. After all, if he had done the slightest bit of research, he would have known that the document was bogus. For example, one of the things reported in the dossier was that Trump had a Russian hooker in his hotel room a few years before he ran. It claimed she gave Trump a “golden shower.” Anybody who knows the slightest thing about Donald Trump would use that incident to automatically negate the document. The President is a bit of a germaphobe. Due to his germaphobia, Trump was reluctant to shake people’s hands—but he let a stranger urinate on him?

That wasn’t the first time John McCain admitted to being a dossier hustler.  In January 2017, he issued a press release that said in part:

One would think that the Republican Senator from Arizona and former GOP presidential candidate would extend the slightest courtesy to Trump and let him know about the document that supposedly was about to be used by the Russians to blackmail the next President. Ask him what was real before he gave it to the FBI so they can join with the other party and launch an effort to depose a duly elected president.

During the campaign, Trump said some nasty and inappropriate things about John McCain. McCain was a Vietnam War hero who spent six years in the North Vietnamese prison camp known as the Hanoi Hilton.  He wasn’t only imprisoned, but he was horribly tortured.  To his dying day, the results of that torture were evident in his appearance and movements.

In July 2015, McCain said that Trump “fired up the crazies.”

We know that President Trump is a counter-puncher, but his response to McCain was inappropriate and below the belt. A few days after McCain’s slap at Trump’s supporters, at a campaign stop in Iowa, the future President said:

When that is combined with the fact that Trump campaign against the political establishment and McCain was knee-deep in the swamp, it’s no wonder why McCain hated the future Trump. But McCain put his hatred of Trump before the needs of his state and the country.

He either knew the dossier came from an unreliable source or didn’t bother to check it out before handing it to Comey. Either way, he put his personal feelings first destroyed the careers of innocent people such as Carter Page and General Flynn (and cost them hundreds of thousands of dollars of legal fees. Most important is that McCain put America through the two-plus years of hell known as Russiagate.

But that wasn’t all.  After promising to vote for the GOP measure to repeal and replacement of Obamacare, he realized that he could be the person to make the Trump administration look bad. Realizing he was the deciding vote, McCain put his personal feelings for Trump before the needs of Arizona and the nation. He broke his promise and stuck America with Obamacare. If he wasn’t motivated by hatred then he was lying about Obamacare for six years.

John McCain was a war hero. But he wasn’t a hero at the end of his senate career.  McCain crapped on his conservative colleagues such as  Senators Rand Paul and Ted Cruz at the end of his senate career. He disparaged Sarah Palin in his book, saying he regretted not picking Joe Lieberman instead of her.  McCain knew that Palin had destroyed her political career by becoming his running mate when he wrote the book. She remained loyal to him, but the 2008 candidate trashed her anyway.  In one of his last acts as a senator, he changed his vote at the last minute and blocked the repeal and replacement of Obamacare. But McCain’s worst move of all was starting the process that became the Russia hoax.

Special prosecutor Durham should investigate who gave John McCain the dossier and what McCain knew about the dossier when he gave it to the FBI. America needs to understand why he put hatred before the country.