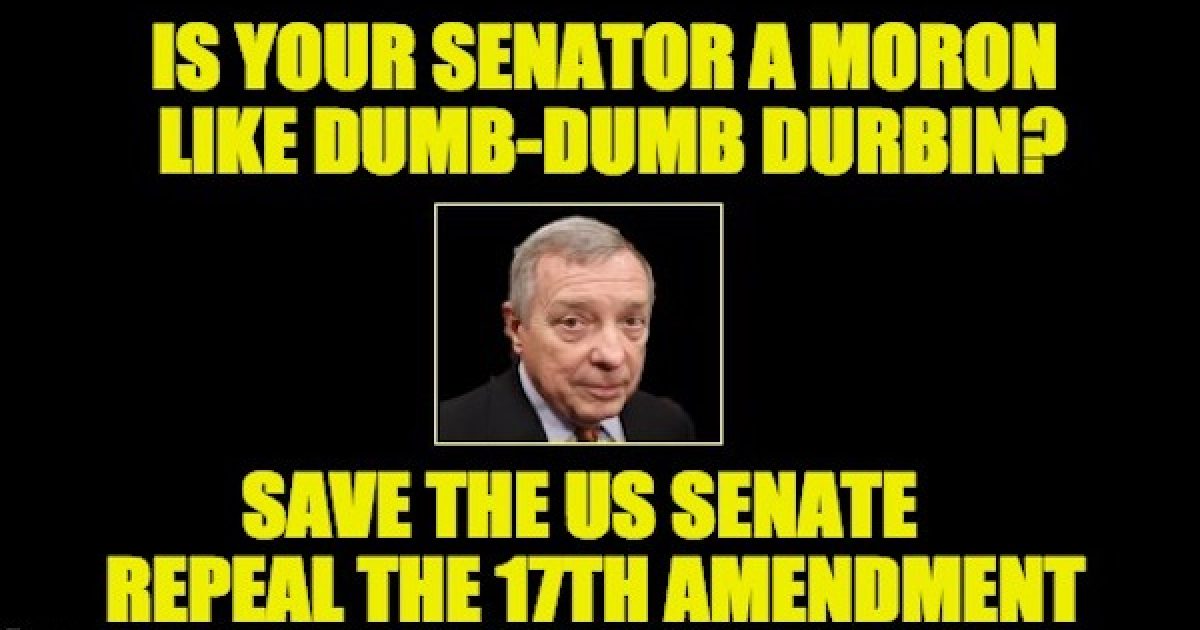 Is your Senator a moron? We’re not talking someone who is just stupid like Hank “will Guam tip over ?” Johnson. We mean someone who is such an imbecile you wonder who ties their shoes in the morning, or who let them out of the house without wearing a protective helmet?  It’s time to repeal the 17th Amendment- Source: Future Political Poster

As Washingtonians continue to angle for position over immigration policy, senators like Illinois’ Dumb-Dumb Dick Durbin and New York’s Chuck “I can’t even wear glasses right” Schumer has come to insist that their chief responsibility is to work on behalf of illegal aliens instead of American citizens, an indication that their headlights may be on dim.  This situation proves definitively that the founders were right about how to elect senators and that the 17th Amendment was one of America’ greatest mistakes. It should be repealed.

The current immigration debate centers on two policies. One is the fate of the so-called DREAMERs — those who were brought into the country illegally by their lawbreaking parents. The second is the idea of “chain migration” — a policy maintaining that once a single illegal is given status he should be allowed to bring dozens of relatives here, children, cousins, uncle’s old lovers, second-cousins 7x removed, etc.

Washington is in an uproar over these issues with one side saying that we should only allow immigrants with merit to enter the U.S. while the other side thinks we shouldn’t have any immigration laws at all, and we should let everyone who wants to come here do so whether they are useful to our society or not.

One thing is certain, the Democrats simply do not give a rat’s arse what the American people think about immigration. Indeed, a recent Harvard-Harris poll (no right-leaning group, for sure) found that 80% of Americans are against chain migration and want it ended. Indeed, it is even higher among people of color. Fully 85% of African-Americans want merit-based immigration and are against chain migration.

But that doesn’t matter, both Durbin and Schumer have boldly announced that their only concern is to come to the aid of illegals. Durbin, for instance, said that from now on he is working “full time” for illegals. Not for Illinoisans..but the people who aren’t supposed to have a say in choosing their senator…illigals. Heck, being Illinois one could understand if he fought for the rights of the dead, they get to vote in the state–but NO! Dumb-Dumb Dick Durbin is spending all his time working for illegals.

So, what is going on here? Why are Democrats turning their collective back on what Americans citizens want in order to push for people whose very presence in this country is illegal?

The reason, of course, that Democrats support the dismantling of our immigration laws is because they assume — and with good reason — that all these sudden “citizens” would swell their ranks and vote for Democrat candidates. . A Democrat operative recently admitted that getting illegals to vote is a “moral imperative” for Democrats if they expect to become an unbeatable electoral powerhouse by overwhelming the votes of native American citizens.

But, whatever the Democrats think they are doing, their actions prove that this country made a huge mistake way back in 1913.

If you think our nation is being ruined by the two-party system today, you should consider the huge mistake we made in 1913 by changing our Constitution to allow American citizens to vote our Senators into office. In the beginning and until 1913 we did not elect our Senators to that chamber because the founders originally meant for them to be individually appointed to office by the legislatures of the states. But in 1913 we passed the 17th Amendment thereby changing the founders’ original intent.

So, previous to 1913, federal senators were appointed by the state legislatures and not elected by the voters. This was done so that the state governments had direct representation in Congress.   But the well-designed system ended created by our founders, ended with the politically correct 17th amendment.

You might at first think it seems like a good idea full of populist “power to the people” to do away with the previous system. It might seem like a way to “fix” what seemed like an error in the original Constitution. The cure, however, has proven to be much worse than the disease and turned that old saying, “all politics is local” into a lie at long last.

As originally conceived by our founders, the members of the House of Representatives were to represent the needs of the people of their regions or states, which is why they are elected directly by the citizens of a state and the number of representatives per state is based on its population. Senators, on the other hand, were to represent the state legislatures in Congress to assure that Federal power did not usurp state sovereignty and was, therefore, appointed by those same state legislatures accordingly. Remember the name of the country is the United States, not the People’s Republic.

But now that our senators are elected to their position by the people we have essentially eliminated any say that state governments might have in federal matter simply because those same senators are no longer beholden to their state legislatures.

Now, it is true that there was a problem with the original way we placed senators in Congress. Previous to the 17th amendment, state legislatures were often so closely split between parties that choosing a senator was a political impossibility. So, sometimes the state legislatures were politically unable to agree on a candidate and were left without a senator — and sometimes even both senators. That meant they were left unrepresented in the Senate. Even in the very first Congress New York found itself without a senator for a period of time because they could not agree on a candidate due to a deadlocked legislature (but remember the NY legislature was deadlocked on the question of independence and the representative in the Continental Congress had to abstain-courteously). The problem really became troublesome after the Civil War and until the Amendment was proposed. Delaware once went four years at a stretch without a senator. The 17th Amendment was meant as a remedy.


At first, this seemed like an ideal solution. Let the people vote and take the burden off the state legislatures and, in this way, assure that there will always be the requisite number of Senators sitting in Congress.

Unfortunately, we have seen the result of this fix to the Constitution, an act akin to putting a Band-Aid on a case of skin cancer allowing the malignancy to grow instead of offering a cure.

By opening senators to election by the people we took the influence of the state governments out of the Federal government. Since the senators, themselves were no longer directly responsible to the state legislature, but supposedly to the people who elected them, they no longer had to pay strict attention to what the state government needed or wanted. The senators were autonomous from the state legislature and have since gravitated to adherence to strict party lines making them beholden to the national parties and not the state OR the people who elected them. Like Chuck Schumer for example, whose priority is the far-left bloc of the Democratic Party. Now, they campaign on the “national issues” of the day as this current immigration debate proves.

In the 1930’s the Democrats pioneered campaigning on party issues as they tried to advance FDR’s New Deal policies. It was made into an art form by the Johnson and Clinton administrations with the Republicans following suit starting with the Reagan era and solidified in Newt Gingrich’s 1994 revolution. National parties have since made strict national issues or planks which have become a litmus test for party candidates and for party money to be bestowed upon them for their campaigns by the national organizations.

This, in turn, has totally eliminated state representation in the halls of Congress and that has unleashed a torrent of Federal rules and regulations that have hamstrung the states and reduced them to vassals of the Federal government.

And senators who are beholden only to the national parties make it less likely that they will differ too greatly from the party line thereby taking away any latitude to act independently or to be influenced by regional concerns. This is increasing year after year.

The issues senators run on have been thoroughly nationalized and so has the expectations of the electorate of just who is and who is not a “proper” member of any particular party. For instance, abortion and gun control have become national standards for party affiliation whereas they used to originate from regional standards. For instance, Al Gore used to be against abortion and gun control before he became a Democrat on the “national stage.” Yet from the point, he went national he suddenly became a good little anti-abortion Democrat. In the early 1990’s he made a 180-degree flip-flop on those issues for no other reason than to be compatible with the national policies of the Democratic Party. He did this while still a Senator, it should be remembered. He certainly did not change his opinions out of introspection but because despite the fact he claims to have invented the internet he had to “fit in” with the directives of the national party to assure himself the attention and support of that national party. After all, one day he might want a promotion and ignore the needs of his state.

Joe Lieberman is another example of this problem. For his last run for Senate, he was forced to run as an “independent Democrat” against a far-left upstart candidate who didn’t even come close to representing the needs and wishes of the people of Connecticut, but the upstart who fit in perfectly with the Democratic Party leadership. The Party alone tried to choose Connecticut’s candidate quite regardless of what the voters or the state wanted.

Another aspect of this problem is the number of campaign donations that come from outside any particular state to fund a Senate run. Lieberman’s unrepresentative opponent was heavily funded by forces well outside the state instead of by the citizens who would actually elect him to the office. This has the effect of driving the costs of running for office ever higher in key races.

This nationalization of issues also has the unintended consequence of making an independently minded national candidate for president difficult to elect or to even be heard because the parties themselves have become stronger than the states. It makes the parties far more the arbiter of who is “allowed” to run for office than the people. This has made the truly conservative Republican a pariah in the national party.

Perhaps it is time to revisit the 17th amendment and place power back in the hands of the states to determine who will represent them and, in turn, us, in the halls of the Senate of the United States.

The text of the 17th Amendment: The Senate of the United States shall be composed of two Senators from each State, elected by the people thereof, for six years; and each Senator shall have one vote. The electors in each State shall have the qualifications requisite for electors of the most numerous branch of the State legislatures.