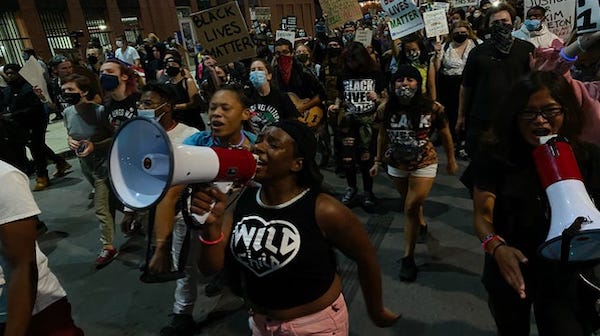 The Detroit BLM group named called Detroit Will Breathe filed a lawsuit against the city government and the Detroit Police Department in August, claiming cops ‘repeatedly responded with violence’ when they took to the streets. In September, a temporary order was handed down by a liberal judge to prevent the Detriot Police from using batons, shields, rubber bullets, and other use of force.

The city counter-sued, saying  demonstrators “have repeatedly turned violent, endangering the lives of police and the public.” Per the suit, during the four protests in Detroit, officers reportedly sustained injuries like “cracked vertebrae, lacerations, and concussions.” In the countersuit, Detroit also denies every allegation presented by the initial lawsuit drafted by the activists.

The city claims the activists participated in the conspiracy, “defamed” the mayor and police, and contends that the city should be awarded damages, The Intercept reported.

The city cites four protests that occurred in the city this year, and alleges that injuries to police officers included “cracked vertebrae, lacerations, and concussions,” according to the report.

The repeated violence should negate BLM protest group Detroit Will Breathe’s claims that the demonstrations should be protected under the First Amendment, the city asserts, the report said.

What should have happened is that the Trump administration should have designated BLM as a domestic terror group.

The various groups that claim to be BLM chapters were out and open about urging their members to start riots, to destroy public and private property, to disrupt innocent businesses, and to commit violence against anyone who opposed them.

Rep Rashida Tlaib blasted the city’s counterclaim as “an unthinkable assault on our constitutional rights,” which was a surprising claim…the surprising part was that Tlaib has heard of the constitution.