DeSantis Warns Of ‘Cold War’ If Stacey Abrams Is Elected Gov. In Georgia

‘Castro To My South And Abrams To My North’ 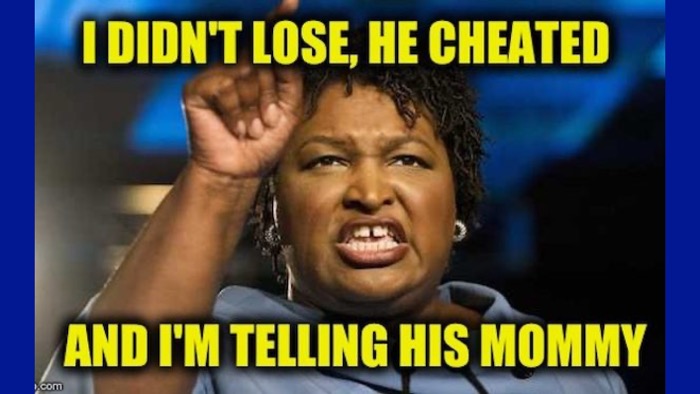 Florida’s Republican Governor made the quip to Georgia voters on Friday.

Speaking at a news conference in Northwest Florida, Gov. Ron DeSantis referenced the Masters golf tournament in Georgia and took a minute to encourage Peach State voters to “take care” of the upcoming gubernatorial race to prevent Stacey Abrams from becoming Governor in 2022.

Surprisingly, Dems and Journos would take issue with that after the braggadocio following the 2020 Presidential election…

DeSantis dropped in the quip as what normal people call a “joke,” — which is something that Dems and Journos don’t seem to comprehend anymore.

DESANTIS: If Stacey Abrams is elected Governor of Georgia, I just want to be honest, that will be a Cold War between Florida and Georgia at that point. I mean, I can’t have Castro to my south and Abrams to my north. That’d be a disaster. So, I hope you guys take care of that, and we end up in good shape.

The Regime Media mocked DeSantis for mentioning Castro’s name now that Cuba’s president is no longer a member of the Castro family.

But Team DeSantis fired back.

Despite DeSantis’ reference to Castro – whether he was referring to Cold War leader Fidel or his brother Raul who took over in 2011, neither Castro is currently in power as Cuba is headed by president Miguel Diaz-Canel.

A spokesperson for DeSantis’ office told Newsweek that he was simply making an analogy to the differences between how DeSantis runs Florida and how Georgia would run should Abrams win.

‘If Stacey Abrams wins the governorship of Georgia, we know that her approach to leadership will involve more heavy-handed government, taxes and bureaucrat influence,’ the spokesperson said.

Where is the lie?

It’s always more and more entitlements with these lefties.

And yet, back in 2021, Abrams was ranting about entitlement while stumping for Terry McAuliffe’s failed gubernatorial bid.

“I come from a state where I was not entitled to become the governor, but as an American citizen and a citizen of Georgia, I’m going to fight for every person who has the right to vote to be able to cast that vote,” she continued.

If you’re keeping score — that’s O for 2 for Abrams when it comes to successful gubernatorial campaigns.

For someone who rants about being entitled, she sure acts entitled.

Recently she was very happy to pose for a photo of her morbidly obese unmasked self surrounded by children forced to wear masks in school.

Still, her biggest entitlement is her ability to continue to go on leftwing cable news programs and insist that the 2018 Georgia gubernatorial race was “stolen” without being called an “insurrectionist” who is a “threat to democracy.”

Imagine if the mainstream media covered her insane delusion that she won in 2018 as they do the people who attended the “Stop the Steal” rally in January 2021.

This is why we don’t have a functional media — they go after DeSantis for a joke, but not Abrams, who is one.