HEY DEMS: Are You Ready To Denounce The Bigot Who Pioneered Modern Judicial Filibusters? 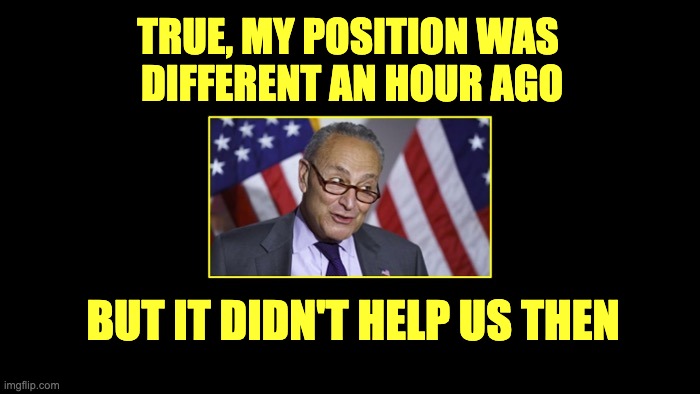 Most political outrage has always been as phony as a $3 bill. But Democrats, seeing a sure path to unopposed political slipping through their fingers, are cranking it up to eleven. denounce the bigot

I shall endeavor to show that the filibuster is being used as a naked power grab in this piece. Not naked as in no clothes, that would give Americans nightmares for months. It means that Democrats have a proven history of obstructing when they are out of power and of removing those very same obstacles at precisely the moment when their own agendas might be blocked by them.

We shall show evidence contrasting Democrats of 2017 to those same Democrats today… evidence of Harry Reid being both for and against the filibuster of nominees … and Emperor of Flip-Flopia Chuck Schumer’s own pioneering role in introducing an unprecedented application of the filibuster to make sure a very well-qualified Latino man was never elevated to the office to which he was duly nominated.

In a significant sense, the Senate filibuster, in its current usage, is Schumer’s own baby. And if he’s going to demand its removal, he needs to come clean on why he’s pushed its use in the first place.

Tucker has often claimed that Democrats are almost always guilty of what they accuse Republicans of doing. Maybe this is true of a racist application of the filibuster, too.

Are Dems lying when they say this issue matters to them because of racism? Is this a naked power grab? Let’s weigh the evidence.

Elected Dems and their media echo chamber are now claiming that ‘anti-democratic’ Republicans are thwarting the supposed will of the people. They are thwarting it by opposing a series of aggressive hard-left agendas designed to appease the Marxist wing of the Democrats despite a near-perfectly balanced House and a 50-50 split in the Senate.

This administration explicitly ran as a moderate. Joe even bragged about having ‘defeated’ the socialists. These people must think we all have very short memories.

For example, Dem talking heads must think that we have forgotten Year One of the last administration.

The left was under the gun, and they knew it. Democrats, having lost power in the White House, Senate and House, had already made up their mind to brand themselves as The Resistance. Their stated objective was to slow-walk everything they possibly could, with hopes of preventing Trump’s administration from making good on promises ranging from the repeal of Obamacare to Tax Reform to building the wall.

A party with no actual power was quite effective in bogging down the Republican agenda, especially the wall. The tool they used to keep Trump’s agenda from proceeding unopposed was the very filibuster that has become politically expedient to remove.

Democrat Defense of The Filibuster, then and now.

What was their opinion of this filibuster back then? It was the same opinion that Chuck Schumer spoke of while defending the filibuster in the Senate in 2005. ClashDaily was pleased to report on Ted Cruz forcing Chuck’s own words down his throat in the recent filibuster debate.

When Republicans held the House, the Senate, and the Oval Office, sixty Senators came together in a bilateral commitment to preserving the filibuster as a vital tool to compel bipartisan legislation.

Newsweek covered a story naming the 27 Senators who have now reversed positions they took in that letter; now that abandoning the filibuster would serve the partisan interests of elected Democrats. Interestingly, Senator Kamala Harris was among the signers.

Schumer’s Defense of the Filibuster was POLITICAL

We know that when Schumer used his ‘Doomsday for Democracy’ and ‘banana republic’ rhetoric, he was defending the judicial filibuster in 2005 because he had an agenda to slow-walk or even block Dubya’s appointments. What’ threat’ was Schumer addressing? He was upset that Republicans wanted to exempt judicial appointments from a filibuster.

Just 8 years later, Harry Reid nuked the judicial filibuster. The grounds he invoked for it were as cynical as the politics we are seeing today. Pretending his own side hadn’t done exactly the same thing in the previous administration, he complained about the Evil Republicans preventing the work of the Senate from going forward under Obama.

Harry Reid’s own words before the Senate, as taken from the official record for the day: 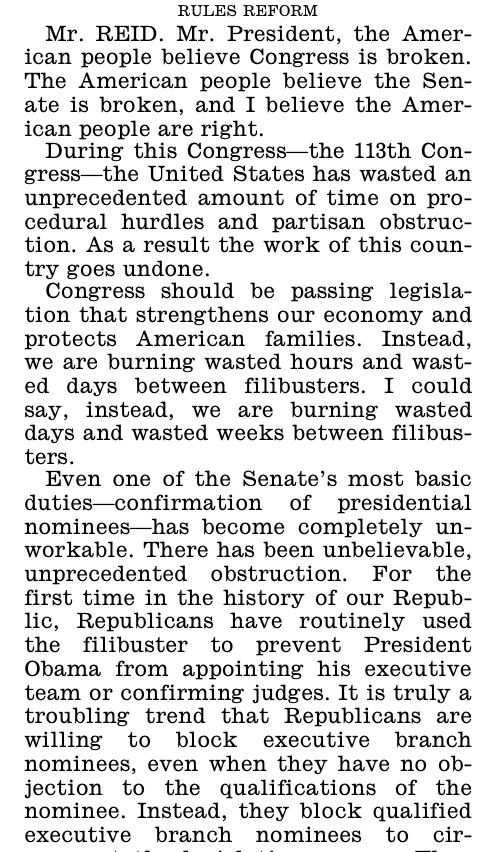 But Harry didn’t nuke it for SCOTUS. Why? Because there was no SCOTUS position up for grabs, and he didn’t want to weaken his hand in opposing a Republican nominee. But would he have done so if there was an empty seat? Yes. How do we know? Harry Reid himself encouraged exactly that political play in 2016.

Outgoing Senate Minority Leader Harry Reid (D-NV) said he is confident that he has laid the groundwork for Democrats to nuke the filibuster for Supreme Court nominees if they win back the Senate in November.

Envisioning Hillary Clinton in the White House and Democrats controlling the Senate, Reid warned that if a Senate Republican minority block her Supreme Court nominee, he is confident the party won’t hesitate to change the filibuster rules again.

Hillary never got the chance to nuke the filibuster for that judge because she never got to be President. (She still blames ‘Russians’ for it.)

But the intent was there. If they get a pathway to take it, they will take it whatever that pathway may look like.

But we’ve all been so focussed on the ENDING of the filibuster, there’s a piece of the story we’ve been missing… one that came up in a conversation between Micahel Knowles and Ted Cruz.

Ted reminded us that we can thank none other than Chuck Schumer for the aggressive bare-knuckle modern use of filibusters to oppose nominees and not just legislation.

He used it to destroy Dubya’s nominee. That nominee was Miguel Estrada, a reportedly brilliant Latino lawyer who has now argued in front of the Supreme Court 24 times.

In doing so, Schumer created precisely the kind of political rancor once predicted by … that great defender of the filibuster … Senator Barak Obama. For exactly the opposite reason.

“If the majority chooses to end the filibuster, if they choose to change the rules and put an end to Democratic debate, then the fighting and the bitterness and the gridlock will only get worse,” Obama said

Schumer used it to block worthy Republican nominees like Estrada when his party was out of power. When his party gained unchecked power, he voted with Harry Reid to remove the roadblocks he helped create. Here is a screenshot from Reid’s quote to the Senate’s same official record.

Schumer’s name is highlighted. But you’ll see some other familiar names on there from Newsweeks list of ‘bipartisan supporters’ of preserving the filibuster… proving that the only principle to which they owe any allegiance is raw political power.

Some more background on the history.

Bush also nominated a prominent Clinton district court nominee, Barrington Parker, to the U.S. Court of Appeals for the Second Circuit. These gestures did not earn much goodwill, and Senate Democrats resolved to obstruct the confirmation of appellate nominees, particularly those like Miguel Estrada, who were likely Supreme Court picks. They slowed the process down — much as Republicans had done to Clinton — while they had the majority. However, once they lost control of the Senate, they tried something new: filibustering appellate nominees. In all ten appellate nominees were successfully filibustered. Five of these were later confirmed after the Gang of 14 deal, whereas the other five were never confirmed. Of note, while the Gang of 14 deal led to the confirmation of some filibustered nominees, many Senate Democrats (including a Senator from Illinois who now sees things from the other side) continued to vote against cloture on high-profile appellate nominees'”