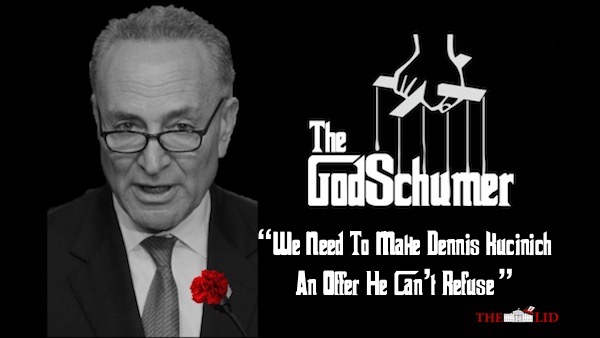 This week my email box has been filled with messages from Organizing For America, Move-On and other liberal PACs falsely accusing the president of being reckless with classified information, obstruction of justice, etc., etc.  The news media has been full of  Democratic Politicians (and John McCain) making the same type of accusations. It seems as if the entire pack of liberal and Democratic sharks have been circling the White House, eager to begin impeachment proceedings against President Trump. e–Well, maybe not quite all of them.

Upending the fledgling presidency of Donald J. Trump may be in the best political interest of a majority of left-leaning public servants, eager to continue suckling at the taxpayer teat. And if they aren’t able to boot him out of office, they want to at least slow down the president’s agenda.  The reality for the rest of America is our need for that agenda is far pressing than these self-centered, party-first Democrats (like Chuck Schumer) will ever admit.

Impeaching a President will have grave consequences both domestically and internationally for the United States.  Just yesterday, after the “I” word was so much as whispered within a mile of the Capitol Building, the stock market took an enormous tumble, recording its most unfortunate day in 8 months.  Investors are getting worried. The stock gains since election day were based on President Trump implementing his agenda, and the recent Democratic Party and MSM attacks (is that redundant?) may be slowing things down. And yesterday’s drop was before we knew that a special counsel would be appointed to oversee the FBI investigation into Russian interference in the U.S. election of 2016.

On the bright side, one democrat, albeit an established “against the grain” type Democrat, is speaking up regarding the mistakes that his colleagues are about to make (video of his appearance is below).

“’You have a politicization of the [intelligence] agencies that is resulting in leaks from anonymous unknown people and the intention is to take down a president,’ Kucinich said, after Fox News host Sean Hannity asked him about the deep state and their attempts to undermine President Trump.

“’Now, this is very dangerous to America. It’s a threat to our republic. It constitutes a clear and present danger to our way of life.’”

Dennis Kucinich has long been at odds with his own party, and the federal government in general.  Often considered a Ron Paul-esque figure for the left, Kucinich is no stranger to speaking his mind, no matter how unpopular his opinions may be in liberal circles.

On the world stage, the ousting of President Trump could spell massive trouble for the United States.  Given the volatility of the current global situation, sparked by the mere apprehension of Trump’s presidency, the message that would be sent by impeachment proceedings would certainly act as a catalyst for those who have already seen an opportunity to engage a United States that is no longer leading from behind.  Russia, North Korea, and the like could construe a coup against Trump as an invitation to further engage our nation in the rising global tensions.

But the Democrats don’t care–they prefer to push unsubstantiated news stories from anonymous sources than care what’s right for the average American.

Note Much of this post originally appeared at Constitution.com written by Andrew West