Democrats Have Too Many Anti-Semites To Punish Ilhan Omar 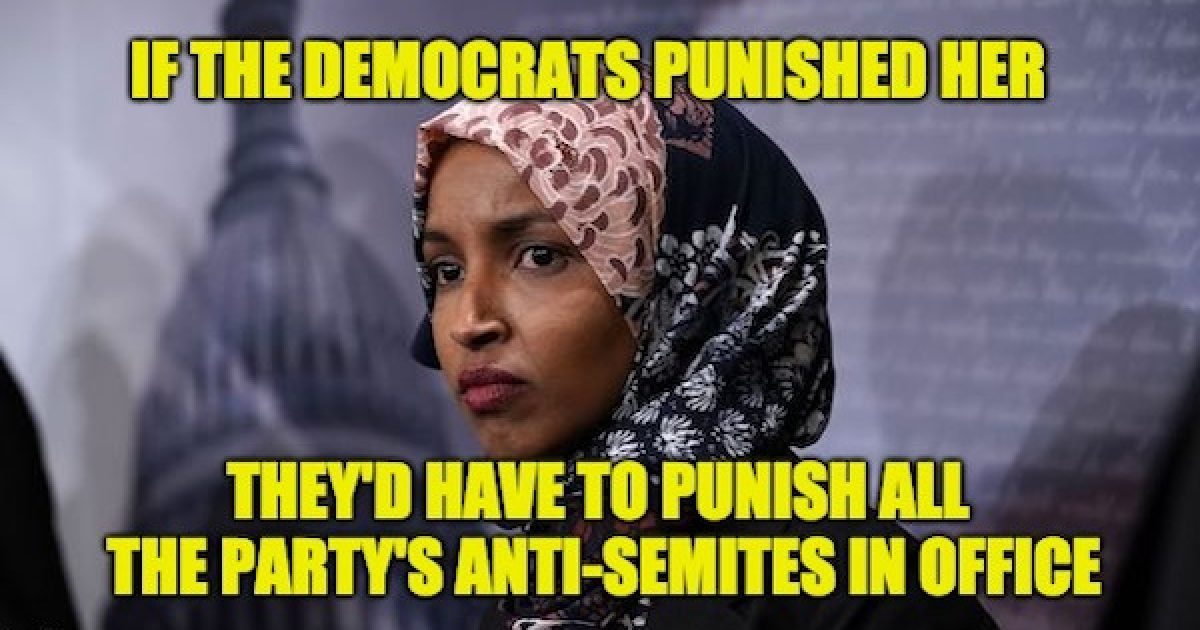 The new representative for Minnesota’s 5th Congressional Democrat Ilhan Omar has made headlines recently because of her anti-Semitic and anti-Israel positions. Many are complaining that since the Republicans punished Rep. Steve King for his bigotry, Rep. Omar should be penalized for hers. The problem with punishing Ms. Omar is that she is just one of many anti-Semitic, anti-Israel Democrats in office.  Even if they were motivated to do so, the party could never censure all of them.

In 2012, Omar tweeted that Israel had “hypnotized the world” to ignore its “evil doings.”

Israel has hypnotized the world, may Allah awaken the people and help them see the evil doings of Israel. #Gaza #Palestine #Israel

Wow, Jews have the power of hypnotism. Wait, if that’s true how come I can’t get my kids to clean their room? The truth is that her comment about hypnosis shows her support of one of the oldest anti-Semitic canards, that the Jews control the world, Heck I don’t even control my household.

Defending that tweet during the 2018 election season, Omar said tweeted that calling attention to the “Israeli apartheid regime” was not anti-Semitic. That might make good campaign fodder, but her description of Israel as apartheid is anti-Semitic and so is her support of the BDS movement.

The BDS movement is anti-Semitic because it bases its attacks on fabricated tales of human rights violations, double standards, comparisons to apartheid South Africa, and false accusations of “war crimes.” Understand, this movement has just one purpose, to delegitimize Israel and to deny the Jewish people their right to self-determination. The founders and leaders of the BDS movement support a “one-state solution” that destroys Israel as the Jewish state.  Both the U.S. State Department and Pope Francis have declared that denying that the Jews have the right to have their own state, is a form of anti-Semitism.

As this coming Monday, we commemorate the Reverend Martin Luther King Jr, allow me to mention that he too believed that many of the anti-Israel attitudes were anti-Semitic.

During an appearance at Harvard University shortly before his death, a student stood up and asked King to address himself to the issue of Zionism which is a movement supporting the rights of the Jewish people to a nation in their historic homeland. The question was openly hostile. King responded, “When people criticize Zionists they mean Jews, you are talking anti-Semitism.”.

When Ms. Omar’s controversy erupted again this week, she went on CNN Newsroom and said, “I don’t know how my comments would be offensive to Jewish Americans,” when asked about her anti-Semitic tweet calling Israel “evil. For her bigotry, Rep. Omar was rewarded by Democratic leadership with a position on the House Foreign Affairs committee.  I suppose the Jews hypnotic power didn’t work.

Louis Farrakhan was justifiably criticized for calling Jews termites, but before him, Hank Johnson (D-GA) used that phrase. At an event at the 2016 Democratic Convention Johnson, who once worried that too many people on the Island of Guam might tip it over, Jewish people who live in disputed territories to “termites” that destroy homes. Johnson also compared Israeli Defense Minister Avigdor Lieberman to Republican presidential candidate Donald Trump, a remark that drew vocal agreement from those in the room.] Johnson said during an event sponsored by the U.S. Campaign to End the Israeli Occupation, an anti-Israel organization that galvanizes supporters of the Boycott, Divestment, and Sanctions movement, or BDS. The event was not an official DNC one, but there was no similar event at the Republican Convention.

After his comment caused an uproar, Johnson gave a half-hearted apology. He was sorry about offending, but wasn’t sorry for or recognized that it was anti-Semitic.

Then there is the woman declared the future of the party New York’s 14th district consisting the eastern Bronx and parts of north-central Queens of elected Alexandria Ocasio-Cortez who became a media darling after she defeated incumbent Joe Crowley. Ocasio-Cortez claims that Israel is “occupying” Palestine, but at the same time admitted she didn’t know what she was talking about.

Ocasio-Cortez promotes her one-sided opinions about Israel’s war on terror, using Al Jazeera as her source ]]she tweeted about one of the Friday afternoons Hamas attempts to storm the Gaza border back in May.

This is a massacre.

I hope my peers have the moral courage to call it such.

No state or entity is absolved of mass shootings of protesters. There is no justification. Palestinian people deserve basic human dignity, as anyone else.

Democrats can’t be silent about this anymore. https://t.co/wJGATOtDsR

She ignored what was happening on the other side, the fact that Hamas was violently storming the border from Gaza an area that is not occupied as Israel had pulled out of Gaza in 2005. I suppose Jewish blood is cheap. 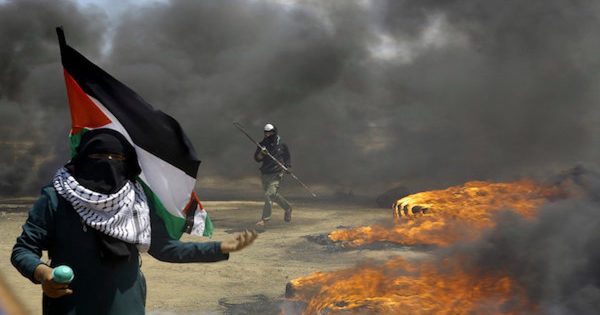 Ocasio-Cortez describes herself as a member of the Democratic Socialists of America which supports the BDS movement.  But the new member of Congress is sneaky. On the DSA’s support for the BDS (boycott, divestment, sanctions) movement against Israel, she has “no comment…at this time.”

Maxine Waters, Financial Services Committee (CA-43): Earlier this year a video was released of Waters embracing Louis Farrakhan. Asked multiple times whether she still supports the anti-Semitic Nation of Islam leader, Waters refuses to answer. At a 2012 luncheon Waters announced her belief in one of the anti-Semitic canards, she said she won’t take money from AIPAC because as she suggests it has too much power over congress.  See the video below:

Senator Patty Murray is not an anti-Semite. She just doesn’t care about antisemitism In January 2018 a Senate committee was evaluating the nomination of Ken Marcus for the position assistant secretary for civil rights at the Department of Education. Mr. Marcus was subjected to an aggressive slander campaign by leading anti-Israel groups seeking to kill his nomination because he has worked to combat the anti-Semitic boycott, divestment, and sanctions (BDS) movement on college campuses and is the founder of the Louis D. Brandeis Center for Human Rights Under Law, a pro-Israel group. When meeting with Marcus supporters, a senior policy adviser to Democratic Senator Patty Murray said her office in the U.S. Senate Committee on Health, Education, Labor, and Pensions (HELP) does “not care about anti-Semitism,” according to two people who attended the meeting. After those comments became public, Patty Murray did not comment on her policy advisers statement.  In other words, she did not care about her staffer’s “not caring.”

The winner in Michigan’s 13th district, Democrat Rashida Tlaib is also anti-Israel Jewish State. After her primary win, she told “In These Times” that she no longer believed in the two-state solution, “One state. It has to be one state.” This is a call for the destruction of Israel.  Israel is a democracy where every citizen if any religion can vote. Rep.Tlaib’s proposition is to load Israel with a few hundred thousand new Muslims so they can vote the Jewish state out of existence.

James Clyburn (SC-6) who is part of the Democratic caucus leadership, shared a stage with Louis Farrakhan in 2011. After Jewish organizations criticized Clyburn taking part in an event with Farrakhan, the South Carolina Democrat brushed off their criticisms. Clyburn told “Final Call” — a Nation of Islam publication — that he was “not bothered in the least bit” by the Jewish objections.

Democrats such as NY’s Kirstin Gillibrand protected anti-Semites in the Women’s March such as Linda Sarsour and Tamika Mallory. Despite the fact that people are finally realizing what this site has been warning for two years, that the Women’s March is anti-Semitic Gillibrand has agreed to speak at their next protest.

NY’s Governor Andrew Cuomo who a year ago claimed that Jews can’t dance is also a fan of Sarsour. He invited her to speak to our college students.

Al Sharpton is a card-carrying anti-Semite. For example, he led two anti-Semitic pogroms in NYC. Their visits to kiss the Sharpton ring of hatred does not mean those candidates are anti-Semitic, it just means they don’t care about Jew hatred.

The examples above represent only a few out of the many Democrats in power who are either supporters of the anti-Semitic Louis Farrakhan (21 members of the Congressional Black Caucus), and fans of the anti-Semitic Linda Sarsour who have shared platforms with her including Jerrold Nadler, Nydia Velasquez, Brad Sherman, Mike Quigley, Al Green, to name just a few. Or the 100+ Democrats who have received financial support from the anti-Israel organization J Street.

Two  Democratic Party leaders with hatred toward both Jews and the Jewish State recently left their offices. Barack Obama the former President of the United States is an anti-Semite, as well of the former number two guy in the Democratic Party Keith Ellison.

If the Democratic Party tried to censure anti-Semites or those who have relationships with anti-Semites such as Farrakhan, Sarsour, and Sharpton there would be a lot fewer Democrats. The party of Harry Truman, who overruled his own state department to become the first world leader to recognize the new state of Israel in 1948, and the party of Lyndon Johnson the first American President to sell modern fighter airplanes to Israel, has long since abandoned its pro-Israel and pro-Jews heritage but few know the extent because the liberal media is protecting the party and ignoring the truth.