A Modest Alternate Solution To Defunding The Police: ‘Stuff’ Day 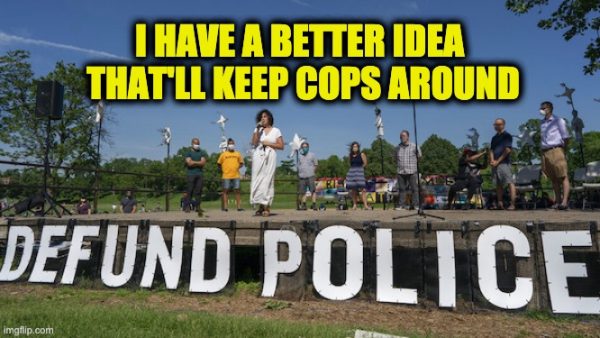 The latest liberal solution to everything wrong in America is to defunding the police. Allow me to suggest that it is a misguided proposal, and there is a solution that meets the same objective and will be much easier and cheaper to execute.

I think it’s agreed by both major political parties, indeed, by all rational thinking Americans that the killing of George Floyd was a disgusting act of politics brutality. What it doesn’t mean is that most police are bad. Indeed no one has shown me any data that indicates that “bad cops” are anything but a tiny percentage of law enforcement officers in this country.  This statement does not include, of course, senior members of FBI management who aided in trying to overturn the 2016 election,

Even though the overwhelmingly vast majority of Law Enforcement Officers are “good cops” who protect the lives and property of their neighborhoods, I worry about the scary momentum that seems to be building behind the defund the police movement. It seems to be readily embraced by the radical Democrats (radical Democrats–is that redundant?).

In America’s largest city, New York, which arguably has the best police force in this county (which is necessary) feeble-minded Mayor de Blasio announced he will be moving funds from the NYPD into children’s programs.  That move would only make sense if when someone was breaking into one’s apartment, dialing 911 would bring a trained child to foil the criminal.

In Minnesota, the city where one lousy apple killed George Floyd while three others watched, the city council announced they had a veto-proof majority to dismantle the police department over the objections of the city’s Mayor. City Council President Lisa Bender said, “our commitment is to end our toxic relationship with MPD and to end policing as we know it to recreate systems of public safety that actually keep us safe.” But the council doesn’t know what they will do when they do away with cops.

The Los Angeles Times reported last week that Los Angeles Mayor Eric Garcetti plans to cut up to $150 million from that city’s police department and redistribute the money to “black communities and communities of color.” I supposed they will need it to help them deal with the increased crime.

Even Hillary Clinton’s former press secretary joined in on the fun.

Along with the heightened crime rates, what these liberal Democrats don’t realize is that getting rid of the police will cost too much money. Think about it, there are approximately 700 thousand law enforcement officers in the country.  If only half of the cops are “defunded,” that’s 350K fired without cause leading to 350 severance packages, an extra 350K on unemployment, and a probable relief package from the federal government. After all, they weren’t let go because they did something wrong, they lost their jobs because of the usual type of absurd, progressive solution that looks good to their base but does nothing to solve the problem.

But I have a solution to that program–“stuff day.” For example, the way it could work in my neighborhood Mondays and Thursdays, we put out our trash. Tuesdays, we put out our recyclables. Wednesday is open, that would be “stuff day.” Every other week, people in the areas where their governments want to defund the police residence will have to take all their stuff and put it out on the curb. They would be able to keep one week’s worth of clothes and underwear and some food TBD. Instead of firing all those cops, the law enforcement officers will patrol the streets and be responsible for collecting everyone’s “stuff.”  Once everything is collected, it will be divided up and redistributed in a manner guaranteeing that everyone has the same amount of “stuff.” The redistribution will occur on the weeks where “stuff” isn’t being put on the curb.

Democrats will love this program, as the party has moved leftward they already think that everything we own belongs to them, and they keep raising taxes and enact programs that will serve to redistribution of income. And besides the all politicians love silly legislation with unintended consequences, whose only purpose is to make them look good to their leftist base—like the liberals wanting to defund the police.

Why does it matter to make the Democrats happy? Well…I don’t know any Republicans who want to defund the police.

This solution has other advantages like preventing crime.  If everyone has the same “stuff,” who is going to want to steal. They will just have to put it out on the curb the next “stuff pickup” day.

Now I am sure that many will hate this program and get very angry. To be honest, it will only be those Americans who believe in the Constitution and personal freedom. Are there many of those? It’s not like personal freedom is a big deal in America. And are that many people who care that much of our personal freedom was returned to us since Donald Trump became president?

There will be others who read this post and say it is nothing but a satire to show how stupid it is to defund the police. Obviously, they are correct.  But think about how angry you would get if you went back to the Obama days when our freedoms were infringed, and the government wanted to take more of our “stuff.”  There is a real possibility of this happening again unless we re-elect Donald Trump and elect more Republican Congressional and Senatorial candidates.