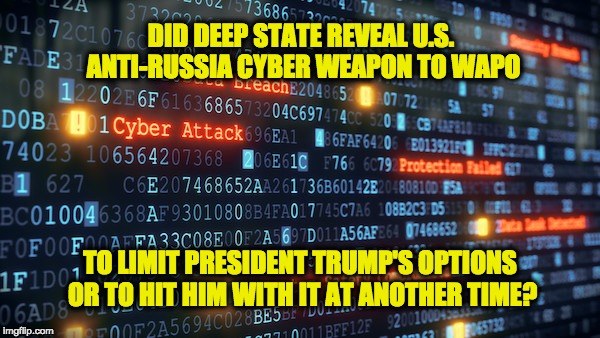 The first thing to be said about the latest leak about a U.S. anti-Russia Cyber Weapon through the always-compliant Washington Post is that, if it’s true, its authors from inside the U.S. government have once again egregiously violated their security oaths and endangered their country.

Leaking national secrets has become such a cottage industry that the obvious question is, Who needs the Russians?

If this is true, someone leaked highly classified US secrets to spin away Obama’s pusillanimous Russia policy & undermine Trump options. https://t.co/SnsRksX4JY

In the case of the latest leak, the ultimate topic is cyber tools that Obama reportedly ordered planted in Russia’s infrastructure, to enable the U.S. to escalate a cyber-war against Moscow if he or the next president deemed that necessary.  (Notably, when Obama hinted at the potential for this in October, I blew the idea a raspberry for sheer irresponsibility.  Just making heroic claims about it in public statements is irresponsible enough.  You don’t pull this one unless you’re going to use it for a very decisive purpose.)

The lengthy WaPo article has only a few paragraphs about the super-secret cyber weapon:

The cyber operation is still in its early stages and involves deploying “implants” in Russian networks deemed “important to the adversary and that would cause them pain and discomfort if they were disrupted,” a former U.S. official said.

The implants were developed by the NSA and designed so that they could be triggered remotely as part of retaliatory cyber-strike in the face of Russian aggression, whether an attack on a power grid or interference in a future presidential race.

Officials familiar with the measures said that there was concern among some in the administration that the damage caused by the implants could be difficult to contain.

As a result, the administration requested a legal review, which concluded that the devices could be controlled well enough that their deployment would be considered “proportional” in varying scenarios of Russian provocation, a requirement under international law.

Interestingly, the report’s lead author, Greg P. Miller, tweeted it out with this message:

Obama secretly ordered cyberweapons planted in Russian networks. It will be up to Trump whether to use them. https://t.co/FUlcL79Uq0

But a passage at the very end of the article conveys the opposite of that statement (emphasis added):

The operation was described as long-term, taking months to position the implants and requiring maintenance thereafter. Under the rules of covert action, Obama’s signature was all that was necessary to set the operation in motion.

By highlighting the point in his tweet, Miller seems to be deliberately shaping the conclusion that, if there’s no cyber-attack on Russian infrastructure, that will mean Trump issued a countermanding order.

How would you know if there’s ever a retaliatory U.S. cyber-attack on Russia?  That’s right: you wouldn’t.  So WaPo and its nameless leakers will remain in total control of that narrative.  You’ll never have reliably empirical evidence to compare their claims with. Nor will you have evidence that, thanks to the leak the Russians discovered the cyber weapon and was able to eradicate it.

Remember that, when they start making new claims about it.  Nothing empirically verifiable has ever been established about it at all.

As it happens, that point is the perfect one to make about the entire article, which regurgitates at great length all the same elements of the “Russian interference” narrative we’ve been dealing with since last summer.

Nothing has become more empirically verifiable in the narrative.  A key portion of it has been cast into significant doubt, however, in recent weeks: the claim that a Russian hacking “group” acting on Kremlin orders was behind the email heists of the DNC, Hillary Clinton, and John Podesta.

The analysis of security firm CrowdStrike, long disputed by other cyber experts, was fatally undermined by disproof of CrowdStrike’s assessment that Russian hackers had intruded on Ukrainian military systems.

CrowdStrike was scheduled to testify to the Senate in March on its analysis of the 2015-16 intrusions in Democrats’ email systems – but that scheduled testimony was canceled, literally hours before it was supposed to occur. Note: it was CrowdStrike that provided the “evidence” that the Russians were behind the DNC hack.

No actual evidence has ever been offered that Russia succeeded in affecting the U.S. election.  Indeed, Obama said last fall that Russia didn’t succeed, and WaPo’s article actually reaffirms the same thing.

Yet the central passage in the WaPo narrative – the turning point of the drama – uses impressionistic ellipses to convey the vague sense that Russia did somehow “succeed”:

Despite the dire warnings, there were no meltdowns in the United States’ voting infrastructure on Nov. 8, no evidence of hacking-related fraud, crashing of electronic ballots or ma­nipu­la­tion of vote counts.

The outcome itself, however, was a shock.

Suddenly, Obama faced a successor who had praised WikiLeaks and prodded Moscow to steal even more Clinton emails, while dismissing the idea that Russia was any more responsible for the election assault than “somebody sitting on their bed that weighs 400 pounds.”

“The White House was mortified and shocked,” said a former administration official. “From national security people there was a sense of immediate introspection, of, ‘Wow, did we mishandle this.’ ”

Huh?  The Russians didn’t succeed in altering the outcome of the election, but Obama’s national security people were mortified and shocked that they had mishandled the “threat”?

Ironically – given that we’re obviously supposed to sympathize with the perspective of the Obama officials – it could hardly be any clearer that their objective was not a free and fair election.  Just ponder that for a moment.  The WaPo narrative only makes sense if the goal of Obama’s officials was not to make sure Americans got the president they meant to vote for, but to make sure that Hillary Clinton won.

There are numerous ways to take down the WaPo narrative; they’ve all been out there for months.  There’s nothing new here, other than the “planted cyber-weapon” bait, apparently deployed as a new narrative theme to flog Trump with.

Well, that, and a slightly more detailed claim about the reported intelligence on Vladimir Putin’s personal involvement in a Russian campaign to, variously, get Trump elected, or disrupt the U.S. election and make Americans lose faith in their system.

(For some reason, the narrative always vacillates between the two.  It does in the WaPo article as well.  As a useful logic check, keep in mind that the Russians couldn’t have had both objectives.  “Disrupting” the election, such that Americans lost faith in their system, would have militated against securing for Trump a tidy, enforceable electoral victory.)

One purported detail about the intelligence on Putin stands out:

Despite the intelligence the CIA had produced, other agencies were slower to endorse a conclusion that Putin was personally directing the operation and wanted to help Trump. “It was definitely compelling, but it was not definitive,” said one senior administration official. “We needed more.”

Some of the most critical technical intelligence on Russia came from another country, officials said. Because of the source of the material, the NSA was reluctant to view it with high confidence.

If I had to bet, I’d bet on the source being Estonia.

We are sure to encounter the exhausted “Russia” narrative again.  And apparently, each reintroduction of it will be baited for us with information that, if it’s valid, has to be a national secret, the leaking of which is a felony under Title 18 USC every time it happens.