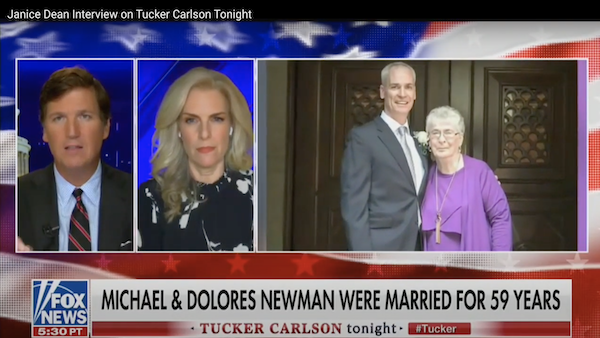 Como’s disastrous decision
The news media are desperately seeking ways to discredit the Red States, who have dared to buck the narrative and open their doors. But they are strangely silent about a story staring them right in the face. Andrew Cuomo the far-left governor of NY State, who shares a brain with his brother Chris, is a media darling held up as an example of how to handle the pandemic. And that’s despite the fact that he issued an order directing nursing homes to take in patients that already had the highly contagious coronavirus that would have otherwise been sent to Hospitals. Cuomo Janice Dean

In February and early March, it was clear from events unfolding in Washington State that retirement homes were particularly vulnerable to this outbreak. This should hardly come as a surprise to anyone familiar with the risk that even more mundane illnesses can trigger life-threatening cases of pneumonia, considering that this virus specifically inflames the lower respiratory tract.

As of March 26th, a letter to the WSJ and a phone call to the Mark Levin Show by a nursing home administrator in New York strenuously protested Cuomo’s new order that obligated nursing homes to accept infectious coronavirus patients into their care.

Tragically, Gov Cuomo later dismissed any objections as financially motivated in his press conferences. At the time, the objection was raised, she was unable to get any New York officials to listen — and unable to contact any parties directly.

The consequences following that fateful order were every bit as devastating as they were predictable. This particular action contributed to over 5,700 known deaths in New York nursing homes at this time. Including both of Janice Dean’s in-laws.

Janice Dean, Senior Meteorologist at Fox News, shared her story on Twitter — one that puts a personal face on the horrors unfolding in a much-neglected story.

Dear friends,
As most of you know, both of my husband’s parents died of covid in different nursing/assisted living residences here in New York. Because of this, it’s hard for me to be an objective person when it comes to this story.

But the fact is, there aren’t a lot of news outlets covering this tragedy which I believe should be one of the biggest stories of the covid19 pandemic of 2020. So, please forgive me for my raw horror, grief and fury. If there’s anything I can say having lived through this,

is that I will do my best to be a voice for all those who don’t have one. There needs to be a real investigation into how bad decisions and poor preparation let a virus ravage our most vulnerable. They had no way to defend themselves, and it will haunt my family forever.

Whether he realized it or not, his own decisions MADE them expendable now, didn’t they?

Somehow New York’s Cuomo — so beloved of the media — and the roundly demonized DeSantis handled their most vulnerable populations quite differently. Unlike New York and a few other states, Florida issued no order compelling nursing homes to accept infectious patients. The doomsday scenario they said would certainly befall Florida never materialized… certainly not on the scale the Chicken Little crowd had predicted.

“#KillerCuomo ruthlessly seeded vulnerable nursing homes with virus-ridden COVID19 carriers,” he wrote. “He undoubtedly would have catapulted plague-ridden corpses over castle walls during the Black Death and done so without moral compunction.”

The Post, meanwhile, suggests: “All the more reason why federal officials with nothing to fear must step in and find the facts. A designated US attorney … could use a grand jury to demand answers about why so many elderly people were put in harm’s way despite the warnings and simple common sense.”

It’s curious, isn’t it, that media types so hellbent on attributing the responsibility of each and every death to the President so easily gloss over specific policy choices that endangered — or even ended — so very many innocent lives.

According to NY Times data on nursing homes, the states where "new cases are increasing" have the highest share of nursing home deaths from COVID-19 (52% vs 35%).

Yet we continue to focus on beach activity and blanket lockdowns as opposed to protecting those in nursing homes.

Hopefully, stories like the tragic one of Janice Dean’s in-laws perishing in a potentially preventable situation will make this issue personal enough that it won’t be waved away by the ‘mainstream’ press as just another cold statistic.

Sometimes, a personal story is the only way to effectively carry a message through an otherwise noisy news cycle.

If you doubt the truth of that, ask yourself — how many people remember the 10,000 massacred in Tianmen Square. And how many remember that one iconic photo of ‘Tank Man’?

And some of us will do what we can to make sure others hear them too. It’s the only way that those lives were endangered by their own government will have their story told, and will see, perhaps, some small measure of justice after the fact.