More Defunding Police–Crime Soars in Major Cities: Libs Call It ‘Safety For All’ 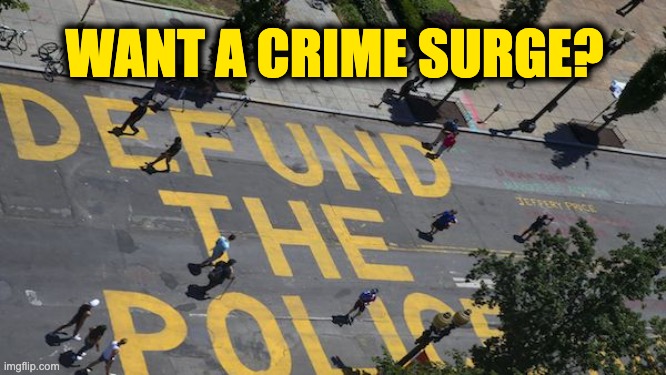 Minneapolis is proposing a “Safety for All” plan that severely reduces the number of sworn officers. Los Angeles, California, is also proposing budget cuts, which will reduce the police force by 951 officers. Seattle cut their police budget by 18% for 2021, and that was a pittance of what the radical left wanted. Portland’s 18% cut failed, and protesters vandalized the Mayor’s home over it. All of these plans come in the midst of spiking crime rates in the big cities. And not one of them will bring “safety for all.” crime soars

Safety for all in Minneapolis?

Three Minneapolis City Council members released a "Safety for All" plan, which will propose $7.9 million in further cuts to police and reinvest in other areas. They want to ultimately reduce *authorized* sworn officers by about 15 percent (888 to 750) in future years. @kare11 pic.twitter.com/oNB3TMOQZE

Three members of the Minneapolis City Council released a “Safety for All” plan on Friday night to cut an additional $7.9 million from the police department’s budget in 2021 and ultimately reduce the authorized sworn force, opting instead to reinvest funding into mental health crisis response and violence prevention methods.

Hours after the proposal became public, a spokesperson for Mayor Jacob Frey’s office expressed “significant concerns” about shrinking the size of the Minneapolis Police Department on a long-term basis.

“Significant concerns” is an understatement since Minneapolis has had to “borrow police officers” from other agencies to staff their department as crime has gone out of control. The plan reduces the number of officers from 888 to 750…and those are after the severe budget cuts completed just after the George Floyd incident. About 20% of the force left the department after the riots and one police precinct’s burning down.

In October, some Minneapolis citizens filed a lawsuit over not having enough police officers to protect the city. Mayor Frey is not in favor of the “safety for all” proposal. His council’s solution to the crime problem and lack of police officers to patrol the streets is to cut more from the police budget.

Safety for all in Los Angeles?

Murders in Los Angeles have risen by 28% over 2019, and there have been 40% more shootings. But never mind all that, a $600 million shortfall in the budget has the city looking at a proposal to cut even more from the LAPD and cost other city employees their jobs as well. According to Fox, they already cut $150 million from the department, and their staffing level is at a 12 year low.

“These envisioned staffing reductions would devastate our ability to provide basic public safety, requiring the closure of local stations and jails, the reduction and elimination of services and ultimately it would jeopardize the reforms gained and achieved in public safety over the last two decades.” LAPD Chief Michael Moore

Listening to the radical left is a recipe for disaster. I’ve worked on police budgets over the years, and there are always normal “adjustments” that need to be made. If the gas budget isn’t big enough, police can’t patrol the city. When you start losing personnel, it used to come down to keeping an extra property officer, records technician, or front desk officer. Now it’s sworn officers on the chopping block.

When your force isn’t large enough to handle the crime level in any city, there are severe consequences. And ‘safety for all’ doesn’t exist.