CRAZY! Now A Tiger Is A Racist Mascot 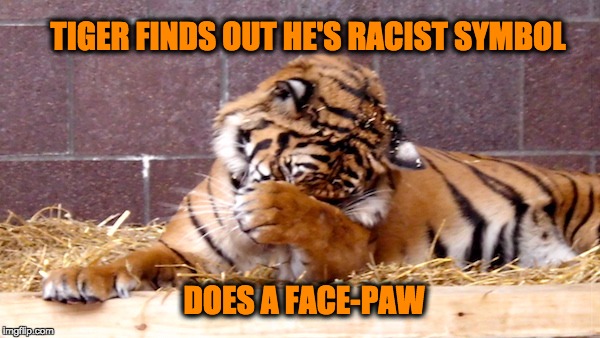 A petition has been started to “change the racist mascot of LSU” by a user called “LaMallori LSU” and also ironically used the infamous black panther fist as an icon next to her name. It already has 132 signatures.

The petition claims that Louisiana State University chose the tiger as their mascot during the “height of Jim Crow South.” It says that the school specifically chose this symbol because it gave the “powerful white males” a way to honor the confederate symbol while continuing to treat black men as sub-human. Wait a second! Aren’t all college football players powerful males (of all races):

They go on to say:

It is incredibly insulting for any African American to have to attend to a school that honors confederate militantism. It is already hard enough to be black at LSU, and these symbols must be changed. We must speak truth to power, and continue to march toward justice. That day is coming, the day when every symbol of white oppression is torn down.

It’s also cruel to cage a wild animal for the amusement of privileged white people. They’ve never been in a cage!

In their own words:

“The following year, 1895, we scheduled a game with what was supposed to be the Tulane team, but as there were not enough football men at Tulane they played anybody they could get hold of. We again employed Simmons to coach our team. We won this game.

It was the custom at that time, for some occult reason, to call football teams by the names of vicious animals; the Yale Bulldogs and the Princeton Tigers, for example. This is still the vogue. It struck me that purple and gold looked Tigerish enough and I suggested that we choose “Louisiana Tigers,” all in conference with the boys. The Louisiana Tigers had represented the state in Civil War and had been known for their hard fighting

This name was applied collectively to the New Orleans Zouaves, the Donaldsonville Cannoniers, and to a number of other Louisiana companies sent to Virginia, who seemed to have the faculty of getting into the hardest part of the fighting and staying there, most of them permanently. One company I knew of went in 200 strong; only 28 returned and many of these were wounded.

So “Louisiana Tigers” went into the New Orleans papers and became our permanent possession.

Our team didn’t compare with present-day teams, in skill, ability, or power. But we had a pretty good time and if there was any professionalism involved I never heard of it.

A few years later when Col. David F. Boyd, who had been president of the University from 1865 to 1880 and again from 1884 to 1886, returned to the University, he was rather surprised to find purple and gold as the colors. He told me they were not the colors, that white and blue had been chosen by him many years ago. But purple and gold had by that time established itself and nothing was ever done about it. Colonel “Dave” also liked the name, “Tigers.” I think he was one of them himself during the Civil War.” Doctor Coates

I am all for equality…but really? An ulterior motive behind a mascot? I supposed the Georgia Bulldogs should change their symbol because bulldogs can be used for fighting and maybe the school is trying to encourage that? Or how about the Florida Gators? How dare they use an alligator, which used to be endangered! That could mean they want them to go extinct! Washington State University uses the Cougar, is it a misogynistic reference to older women who date younger men? Wake Forest’s The Demon Deacon ignores the separation of church and state, and Michigan’s Spartans and obvious accusation that Greeks are violent.

Catch the point? This is nothing but another example of American entertainment and discourse being ruined by the politically correct, nobody’s feelings get hurt, everybody gets a participation trophy millennials who are little more than thugs who try to brand anybody who disagrees with their false vision of nirvana as bigots.

Some of this post was originally seen at EagleRising