What It Means To U.S.-China Geopolitics 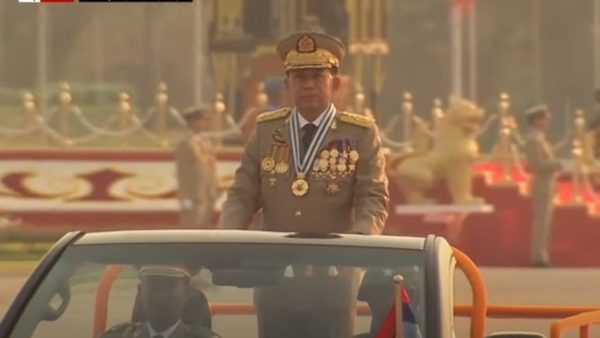 And now, for a little geopolitics.  A military coup was mounted in Myanmar (formerly Burma) the night of 31 January-1 February 2021, with basically the entire civilian leadership being taken into custody, and the military declared a state of emergency for the next year.

This is not unrelated to the rest of the world situation.  There are differing opinions on what it means and plenty of ways to sample them.  Some commentators suggest State Counselor Aung San Suu Kyi and senior ministers of the toppled government were getting too close to China.  The nationalist military brass, in this view, basically wanted to preserve Myanmar’s independence from China rather than see Chinese economic influence take over.

What's happening in Myanmar has a huge impact on China

Xi already built 2 pipelines through Myanmar, and has big plans for a major port and rail line pic.twitter.com/sYA7muIBeA

Others point out that the chief of the armed forces, Min Aung Hlaing, has declared himself the ruler under martial law and is known to have connections with China himself.

#Myanmar army commander-in-chief Min Aung Hlaing has ties with the military of #China going back at least a decade. He was sanctioned in 2019 by @USTreasury for human rights abuses under his command against the #Rohingya. https://t.co/ajFC9gaQ4B #BurmaCoup pic.twitter.com/set6D3U66m

This point suggests it’s not as simple as the military resenting Chinese encroachment through the civilian leaders.

Rather than running down a list of other commentators’ points, I’ll cut to the chase and lay out my own thinking.  I don’t think this is about the recent national elections in Myanmar or the kind of long-term concerns that might be in the driver’s seat if the world’s expectations were that there’s a status quo against which to stretch muscles without disturbing it.

I think the status quo has well and truly lost its enforcing infrastructure (a process that has been underway since long before Trump entered office). All the moves we see starting now are going to be about breaching it and trying to jam a new “status quo” into place.  That’s the threshold we have reached with the new U.S. administration.

n Myanmar, I suspect there are a bit of two major things going on.  One is that China is, in fact, making big moves on Myanmar.  She has been for some time.  Myanmar is prime real estate on the Indian Ocean, situated to dominate the western exit from the Strait of Malacca for an aspiring hegemon with plenty of resources and imagination.  Beijing has actually been making the moves on Myanmar for at least 30 years.

China isn’t behind the coup, in my assessment, but China probably knew it was coming. It wouldn’t be going too far to suppose that China was very quietly consulted.  (Xi was in town in mid-January 2020 with a group of senior officials having a high-profile visit; my sense from the coverage of long-time observers is that they share my view that this was not a perfunctory, checks-in-the-block visit.)

General Hlaing is executing the coup not because he wants to be subservient to China but precisely because he doesn’t.  China is inevitable; subservience is not.  Hlaing will get better deals from Xi and maintain more independence than the civilians would. 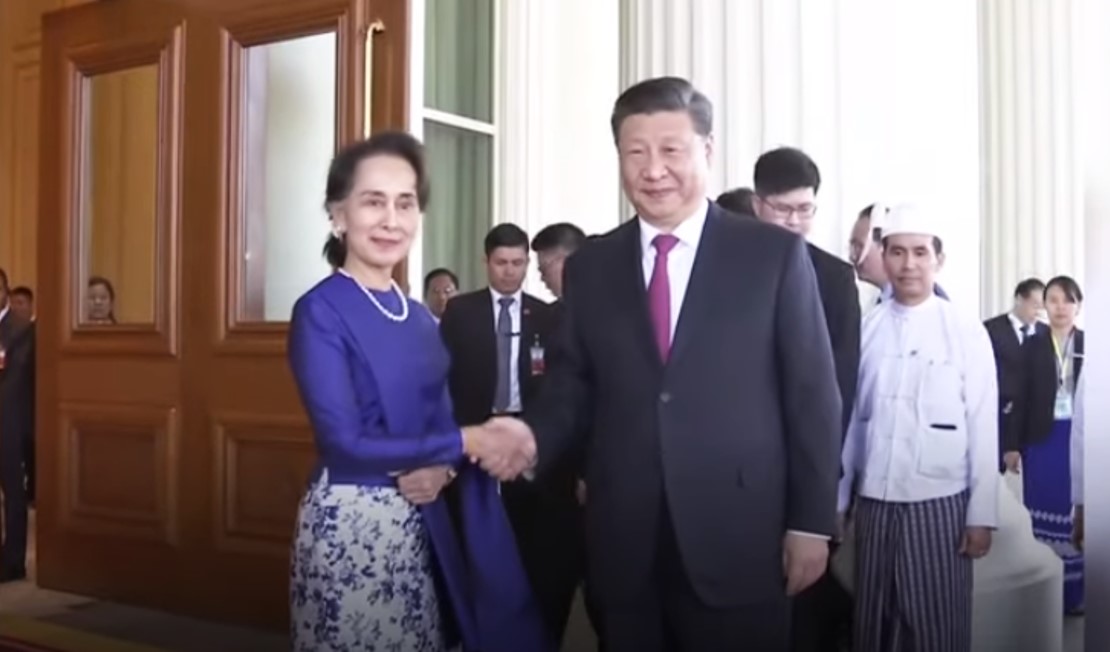 The timing – and this is where attention needs to be paid – is because the United States under Joe Biden will be the weakest we have been in over a century, in terms of political will and leadership.  It doesn’t matter if you think that.  What matters is that China, where Biden’s family has tremendous financial and political exposure, knows that, and others, like the military brass in Myanmar, see it too.

You’re welcome to say China thinks that if you prefer.  We’ll let time decide.  China will continue to eye major muscle movements and execute them when Xi thinks he can get away with them.  And he will get away with them.  Whatever investment Xi may have in the coup in Myanmar, he will reap a profit from.  The Biden USA won’t stop him.

Here are two things that closely preceded the coup in Myanmar.  One is the eruption of the Navalny protests in Russia when the dissident returned to pose a challenge to the Putin regime.  The timing of that is also extraordinary, within days of Biden’s inauguration.

Xi doesn’t see this through the lens of the liberal West.  He sees it as the profile of a “color revolution,” probably sponsored in some part by organized supporters in the West, who, from his perspective, are neither trustworthy nor benign.

Don’t be offended by the mere enunciation of that view.  This isn’t about what you think; it’s about what Xi Jinping thinks.  What is a “color revolution” in Russia going to do, from Xi’s perspective?  Bring unwelcome forms of Western influence into the streets and hearths of the neighbor China can least afford to see turmoil in.

That’s happening at a time when the leadership in both Brussels and Washington will get behind a “color revolution” in Russia.  Two things are potentially going on (again, from China’s viewpoint): Putin is potentially being weakened, and Western supporters of Navalny are potentially getting an entrée into Russia.  The first can be exploited by China but would require moving fast.  The second might be exploitable but might also be a meaningful threat.  China must be ready.  Consolidating a landbridge to the Bay of Bengal is a big piece of the readiness picture; it’s the western flank of China’s project to turn the South China Sea into a virtual extension of Chinese territory, to be treated as if it’s land and not international waters.

The second thing that closely preceded the coup in Myanmar occurred just a few days ago.  It should seem routine.  But in the altered environment of a crumbling status quo, nothing is routine now.

The event was the initial contact of the Biden national security team with its Japanese counterparts.  In the course of those consultations, officials including President Biden assured the Japanese of our commitment to defend the Senkaku Islands, a small island group China disputes with Japan, under Article V of our mutual defense treaty with Tokyo.  This was widely reported in regional media.

BREAKING | BIDEN COMMITS TO SENKAKU DEFENSE
Under the Japan-U.S. Security Treaty, the U.S. will regard an attack on Japanese-administered territory equivalent to an attack on American soil.https://t.co/9Wmd8dZxIF

The U.S. has recognized Japan’s claim to the Senkakus for decades, and in a sense, this should be no surprise and have no particularly incendiary effect.

But on 22 January, China passed a law allowing her coast guard to fire on foreign vessels entering waters claimed by China and to attack the infrastructure installed on disputed islands by other nations.  That law will apply to the Senkakus, located northeast of Taiwan, as well as the South China Sea islands.  (It will, in theory, apply to Taiwan, too, given China’s claim to the island and its surrounding waters.)  China has been sending “coast guard” ships to menace the Senkakus for the last nine years.  The islands are not inhabited, but Japan has rudimentary infrastructure there.

It was on 23 and 24 January that China then performed simulated strikes with strategic as well as tactical air platforms on USS Theodore Roosevelt (CVN-69) and her escorts – recently deployed from the U.S. West Coast – as they entered the South China Sea from the east.  In performing the strikes, the Chinese air assets penetrated Taiwan’s Air Defense Identification Zone (ADIZ), and according to regional media, were heard on radio coordinating the strikes.

They would have meant to be heard – in Taiwan, and by the Theodore Roosevelt and hence the United States.  We haven’t been told what they said. Still, it’s very possible their actions and tactical audio exchanges violated some of the terms of the “CUES” maritime safety protocol that exists between the U.S. and China, a sort of “U.S-China INCSEA agreement” (Incidents at Sea) similar to the one we have had with Russia since the Nixon administration.  (CUES stands for Code for Unplanned Encounters at Sea.  Nineteen other nations are now in the agreement, which was first signed in 2014.)  By that agreement, the parties are not supposed to act like we’re attacking each other if we’re not.

In that overall context, and given the purpose of Theodore Roosevelt’s presence mission in Southeast Asia – i.e., to act as a deterrent to China – the routine affirmation of our commitment on the Senkakus effectively functions as drawing a red line if China chooses to see it that way. 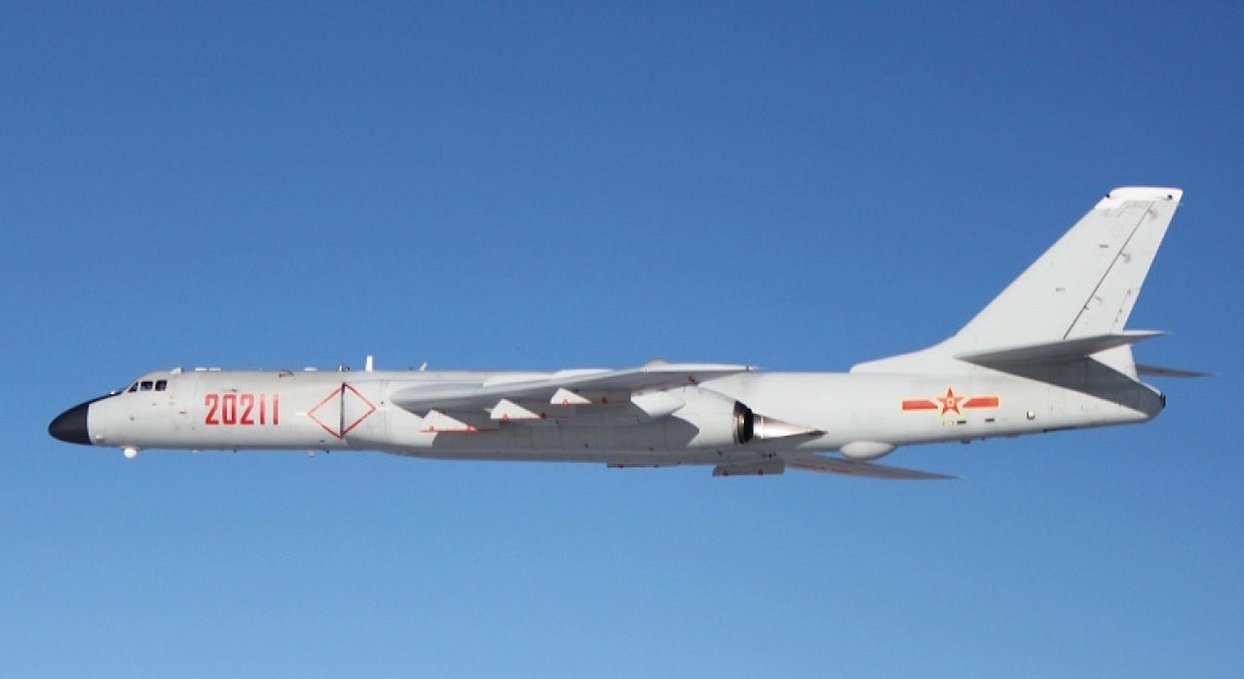 The error would be thinking China does not.  If Xi Jinping’s take is that the Biden administration has just drawn a red line it can’t defend, he would only be interpreting Biden as being similar to Obama.

Power is as much about will as about capability.  Deterrent force doesn’t use itself; it has to have credibility, situational awareness, and prudence wielding it.  Unfortunately, those quantities are the ones lacking as the Biden administration straps in.  It’s not clear that the administration has even taken the reins on recognizing a need for deterrence in East Asia and defining its terms.

That cannot, incidentally, be because of any “shortcomings” in the transition from the Trump administration.  No one in the relevant decision-making positions should need any tutorials from his predecessor to deal with a national security problem-set whose features have been developing for decades.  It’s not because of lack of information.  It’s because of a lack of mindset.

I think Xi knows better than to immediately make an abrupt move like attacking the Senkakus.  But he can compromise the Biden USA’s credibility if the coup in Myanmar successfully and permanently ousts the friendly government Washington was backing.  The credibility-crushing is magnified if it’s then China that keeps slinging the infrastructure there: building up transportation, warehousing, and port facilities that amount to a formidable logistic hub, bypassing the Malacca chokepoint and facing India’s ocean bastion.

And so … we’ll see, to be sure, but I don’t think anyone, anywhere, thinks Biden will bring the civilian-led government back to Myanmar in the next year.