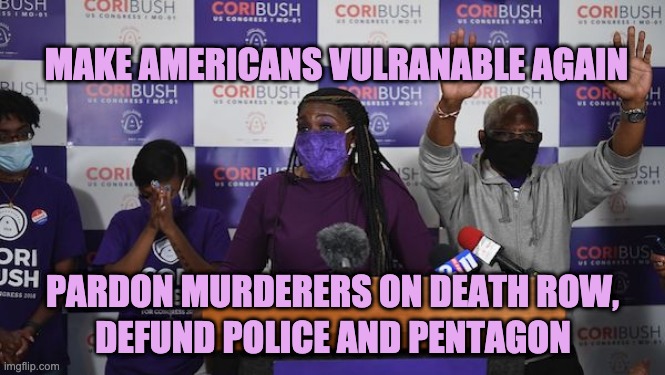 Perhaps her slogan should be MAVA, “make Americans vulnerable again.”The ‘Squad’s’ newest member Cori Bush is demanding that Joe Biden move to grant clemency to everybody sitting on death row. She also wants to defund the police and the Pentagon. Bush’s view shows again that the leftists don’t care about protecting Americans.

The Missouri Democrat made her views clear in a Time magazine op-ed Monday, spurred on by the recent execution of Brandon Bernard, a man convicted for the 1999 robbery, kidnapping, and brutal murder of youth pastors Todd and Stacie Bagley.

Bush described the death penalty as “murder in the name of justice” and attempted to draw a link between it and racism, which has become the left’s go-to grievance for all past and future wrongs.

“Ending the death penalty is about justice,” she argued, seemingly unaware that families of their victims need justice as well. “It’s about mercy. It’s about putting a stop to this nation’s dark history of lynching and slavery.”

“We must build a fair criminal-legal system on a foundation of mercy, due process and equity,” continued Bush. “We must break the cycles of death, devastation and trauma that have broken Black and brown communities like mine.”

The crux of Bush’s argument is the claim that “black and brown people are overrepresented on death row and in the larger prison system.” The first link takes you to a graphic from the Death Penalty Information Center that shows that 42.3% of death row prisoners are white. Exactly the same percentage are black, while Latinx death row inmates make up another 13.5%. So what do these numbers prove beyond the obvious conclusion that minorities seem to commit more deadly crimes when compared against the U.S. population breakdown than non-minorities? Men make up 98% of all those currently on death row, while just 2% are female. Can we extrapolate from those numbers that the criminal justice system is inherently sexist?

Bush stands in opposition to both Joe Biden and Barack Obama, who recently expressed that defunding the police is a losing political argument. “It’s not a slogan,” she argues. “It’s a mandate for keeping our people alive. Defund the police.”

With all due respect, Mr. President—let’s talk about losing people. We lost Michael Brown Jr. We lost Breonna Taylor. We’re losing our loved ones to police violence.

It’s not a slogan. It’s a mandate for keeping our people alive. Defund the police. https://t.co/Wsxp1Y1bBi

And she didn’t stop there. Bush has even gone so far as to argue that it is necessary to defund our military. “If you’re having a bad day, just think of all the social services we’re going to fund after we defund the Pentagon.”

The Senate Budget Chair after defunding the Pentagon pic.twitter.com/UILrEVrMBZ

No cops and no military that sounds safe. What’s next? Does Bush want us to walk through NY’s Central Park at 2am with hundred dollar bills hanging out of our pockets and wearing a sign saying “I have money attack me?”