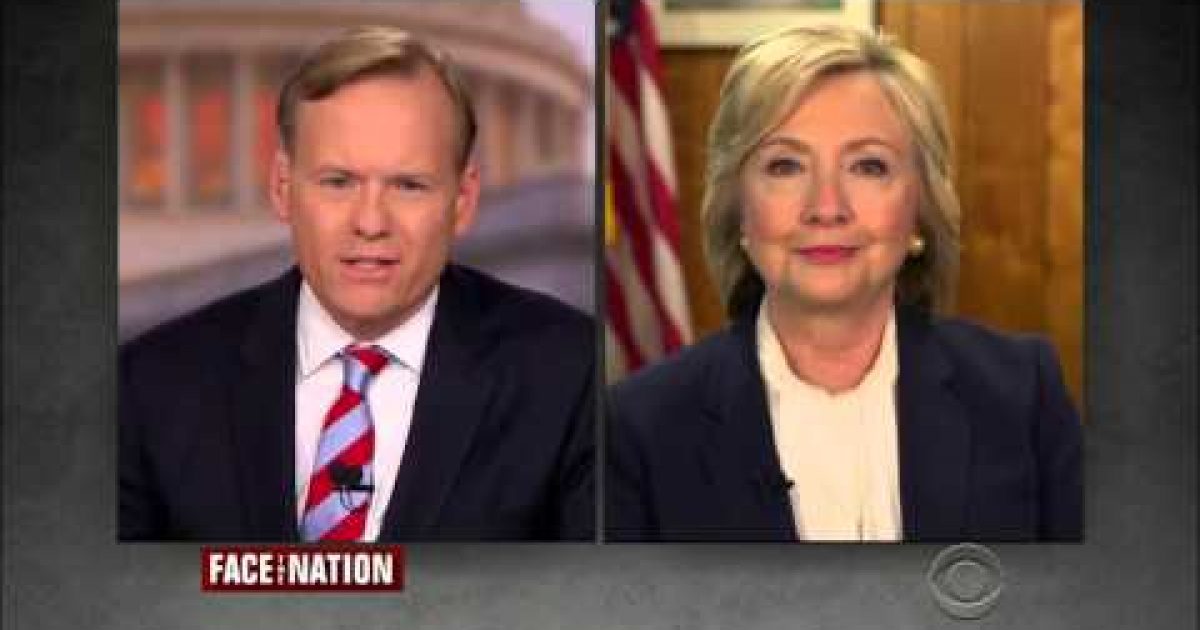 Emails released this past Friday morning  showed Hillary Clinton instructing a State Department  employee to ignore the rules about secrecy, telling him to remove the heading which marked the fax as confidential and email it as if it wasn’t secure. Specifically she said,  “If they can’t, turn into nonpaper w no identifying heading and send nonsecure,”

Hillary Clinton appeared on CBS News’ “Face The Nation” on Sunday, and stumbled when trying to defend her cavalier attitude toward email security when pressed by host John Dickerson. Clinton’s defense was that there is no proof that the information she requested was ever actually sent which was true, but that still ignores the fact that she instructed her adviser to ignore security rules.

The email in question provides the clearest evidence yet of Clinton’s disregard for national security and protecting intelligence. The woman who wants to be in charge of all the U.S. secrets not only knew how to bypass government security measures but she ordered others to do so.

Below is a transcript of the relevant part of John Dickerson’s interview with Clinton on “Face The Nation”:

Dickerson: What’s striking about that particular email is it suggests you were very facile with how to do this, this process. You knew the instructions for how to get around the restrictions for sending classified information. So you’re saying there’s never an instance, any other instance in which you did that?

Clinton: “No, not at all, and as the State Department said just this week, that did not happen and it never would have happened because that’s just not the way I treated classified information. Headings are not classification notices and so often times were trying to get the best information we can and obviously what I’m asking for is whatever can be transmitted. If it doesn’t come through secure to be transmitted on the unclassified system. So no there is nothing to that like so much else that has been talked about in the last year.”

Dickerson: “So in no instance — what’s striking about that particular email suggests you were very facile with how to do this, this process. You knew the instructions about how to get around the restrictions for sending classified information. So your saying there was never an instance, any other instance in which you did that?”

Clinton: “No, and it wasn’t sent. So, I think, you know, this is another instance where what is common practice, namely look I need information, I had some points I had to make, and I was waiting for a secure fax that could give me the whole picture, but often times there is a lot of information that isn’t at all classified. So, whatever information can be appropriately transmitted unclassified often was, that’s true for every agency in the government and everybody who does business with the government. But the important point here is I had great confidence because I had worked with Jake Sullivan for years. He is the most meticulous, careful person you could possibly do business with and he knew exactly what was and wasn’t appropriate and in fact as the State Department said there was no transmission of any classified information. So, it’s another effort by people looking for something to throw against the wall, as you said in the beginning of the program, to see what sticks, but there’s no there there.”

Dickerson: “Well, this one is a little different since the FBI is investigating this specific question of whether a classification was meddled with.”

Left out of the conversation is the fact that in 2010, Hillary Clinton asked the same aide to “just email” information that was on the State Department’s classified system.

A video of the segment follows: