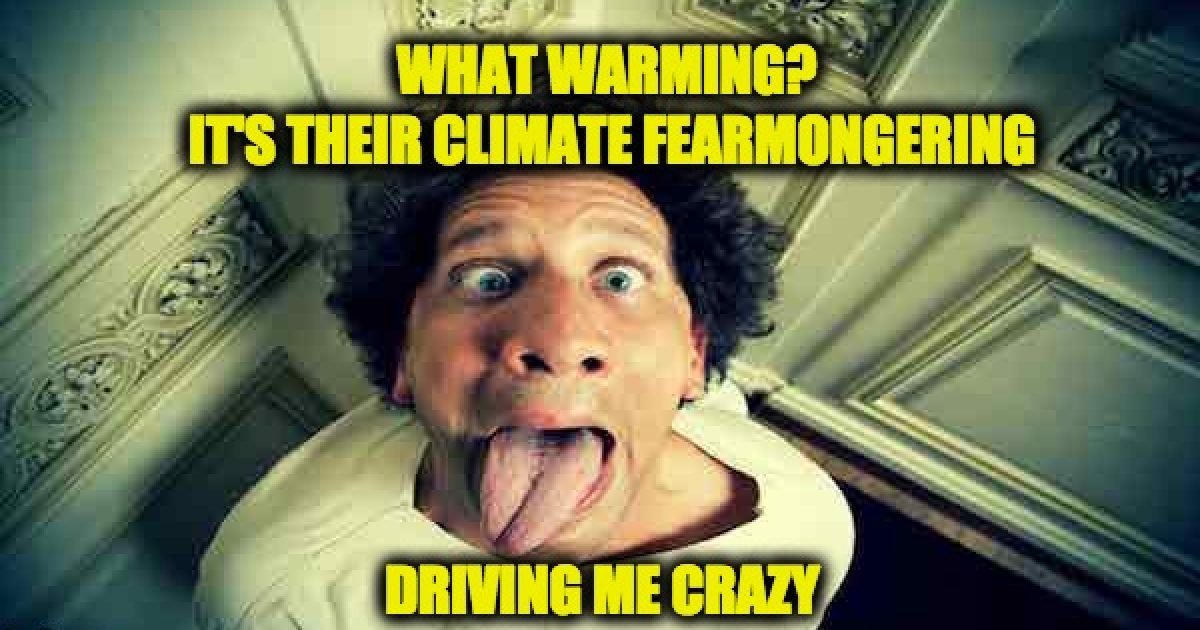 Scientists at MIT have released a study worthy to be featured on “The Official Lid List Of Stupid Things Blamed on Climate Change.”  Nick Obradovich, a research scientist at the MIT Media Lab who, with Robyn Migliorini, Martin P. Paulus, and Iyad Rahwan co-authored the new study says if global warming continues, more of us will go nuts.  I wonder if they realize that if the fear-mongers keep pushing their unproven hypothesis in our faces, we will all go crazy.

Obradovich, the dips in mental health will happen if the global temperature to increases by 2 degrees Celsius above pre-industrial levels. “Our paper — when coupled with evidence that climate change may impact everyday human moods to severe outcomes like suicide — provides further evidence that exposure to heat, on average, worsens mental health outcomes,”

Wellbeing falters without sound mental health. Scholars have recently indicated that the impacts of climate change are likely to undermine mental health through a variety of direct and indirect mechanisms. Using daily meteorological data coupled with information from nearly 2 million randomly sampled US residents across a decade of data collection, we find that experience with hotter temperatures and added precipitation each worsen mental health, that multiyear warming associates with an increased prevalence of mental health issues, and that exposure to tropical cyclones, likely to increase in frequency and intensity in the future, is linked to worsened mental health. These results provide added large-scale evidence to the growing literature linking climate change and mental health.

Wait a blooming second, are they back on the more frequent hurricanes?  They have been predicting that since Al Gore only had one chakra, but if these alarmists ever looked out the window, they would notice that their prediction never panned out.  A recent study by two scientists, Dr. Ryan E. Truchelut and Dr. Erica M. Staehling revealed that the number of hurricanes has been decreasing since 1950:

The 2017 Atlantic hurricane season has been extremely active both in terms of the strength of the tropical cyclones that have developed and the amount of storm activity that has occurred near the United States. This is even more notable as it comes at the end of an extended period of below normal U.S. hurricane activity, as no major (category 3 or higher) hurricanes made landfall from 2006 through 2016. Our study examines how rare the recent “landfall drought” actually was using a record of the estimated total energy of storms over the U.S., rather than prior methods of counting hurricanes making U.S. landfall. Using this technique, we found that 2006–2015 was in the least active 10% of 10 year periods in terms of U.S. tropical cyclone energy but that several less active periods had occurred in the last 50 years. The 2006–2016 drought years did record the lowest percentage of storm activity occurring over the U.S. relative to what was observed over the entire Atlantic. This finding is further evidence for a trade‐off between atmospheric conditions favoring hurricane development and those that are most favorable for powerful storms to move towards the U.S. coastline.

Nick Obradovich, a research scientist at the MIT Media Lab and co-author of the new study, warned of “catastrophic” dips in mental health for some if climate change causes the global temperature to increase by 2 degrees Celsius above pre-industrial levels. “Our paper — when coupled with evidence that climate change may impact everyday human moods to severe outcomes like suicide — provides further evidence that exposure to heat, on average, worsens mental health outcomes,” Obradovich said, according to Inverse.

The study also found that a 1-degree Celsius increase over 5 years — or a 1.8-degree Fahrenheit increase — causes a 2 percent increase in mental health problems. Perhaps they should compare that to the mental disease increase from the downturn in the economy that will be caused if the government implements their proposed taxes and regulations based on their unproven hypothesis.

We don’t really have to worry about the crazy study because according to the satellite temperature data, the Earth hasn’t warmed in twenty years.

Folks, this is just the latest scare tactic pushed by the purveyors of a hypothesis that the facts show if one ignores the climate models that have been proven wrong at every step, and instead looks out the window to see what’s really happening proves their hypothesis incorrect.

Their false mongering claims will do more to make people crazy than this new study.

Below is the revised version of the official list: