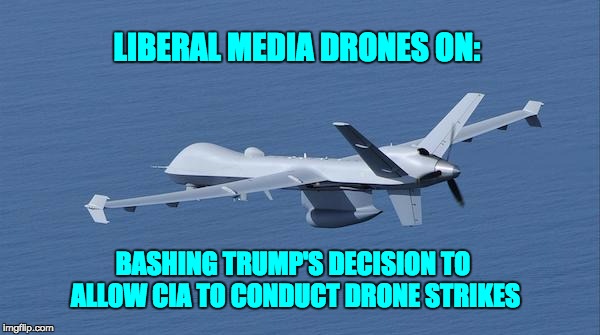 Hmm.  Reporters at the Wall Street Journal have an article  claiming that President Trump has given the CIA “secret new authority” to conduct drone strikes against terrorists.

President Donald Trump has given the Central Intelligence Agency secret new authority to conduct drone strikes against suspected terrorists, U.S. officials said, changing the Obama administration’s policy of limiting the spy agency’s paramilitary role and reopening a turf war between the agency and the Pentagon.

The language is breathless:

The new authority, which hadn’t been previously disclosed, represents a significant departure from a cooperative approach that had become standard practice by the end of former President Barack Obama’s tenure: The CIA used drones and other intelligence resources to locate suspected terrorists and then the military conducted the actual strike.

“Hadn’t been previously disclosed”?  Well!  And to think we’re nearly eight weeks into the new administration.

But the larger point here is that Obama himself had the CIA conducting hundreds of anti-terrorist drone strikes outside of the ground-war zones of Afghanistan and Iraq up through at least 2015 (compared to the total of 57 similar drone strikes conducted by all agencies in the entire George W. Bush administration).

The WSJ report sort of alludes to that — obliquely, and down in paragraph 17 of the article.  You wouldn’t know it unless you read all the way to that paragraph, but here’s what it says (along with paragraph 18):

Under pressure by the ACLU, other human rights groups and others, Mr. Obama in 2013 began to push for more drone operations to be conducted by the Defense Department.

But the efforts to move those operations to the Defense Department ran into problems—a combination of interagency squabbling, budgetary competition and bureaucratic inertia.

In other words, Obama had the CIA conduct drone strikes for at least four years before he even started talking about instituting his “standard practice.”

He was still using the CIA to conduct drone strikes in April 2015, when he spoke of a “new push” to move all drone attacks into the Pentagon.  (Although, according to some reports, he had actually loosened the rules for CIA drone strikes in Pakistan, between his policy epiphany in 2013 and the fresh political challenge in April 2015.)

Note, moreover, that the implication that bureaucratic foot-dragging would hamper him in making that shift is itself a nonsense theme.  He’s the president.  He can just tell the agencies how they have to do it, and order them to figure out the mechanics of it.

On 1 July 2016, Obama published the summary (mentioned above) of drone strikes and fatalities from them during his presidency, covering the period up through 31 December 2015.  He wrote at length about measures to mitigate collateral damage and increase transparency, but did not reference anywhere a shift of drone-strike operations out of the CIA and into the Defense Department.

According to the Washington Post, quoted at Breitbart, the CIA conducted at least seven drone strikes in the first half of 2016.  At the time of the WaPo article (June 2016), Obama was said to still be shifting drone-strike operations from the CIA to the Pentagon.

So when the WSJ article speaks of a “standard practice by the end of Obama’s tenure,” it apparently means the very, very tippy-tail end of Obama’s tenure.  (And that’s assuming we can believe the CIA actually stopped conducting the anti-terrorist drone strikes in question, since official documentation on that appears to be lacking.)

None of this is an indictment of Obama’s drone policy (although, as it happens, I was concerned about Obama’s overreliance on headhunting with drones from very early in his presidency.  If Trump continues it on the same basis, I’ll have the same concern about him).  The debate over drone use is a separate issue.

What deserves scorn here is the childishly obvious attempt to smear Trump with a rhetorical indictment that doesn’t bear even the slightest scrutiny.  Come on, guys.  We’ve all got Internet access, search engines, and our own memories of the past eight years.  Get real.

Jeff’s Note: I wonder if we tell the liberal media that the drone’s are made by Samsung, they will just figure the CIA-led strikes are simply part of the program revealed by WikiLeaks.