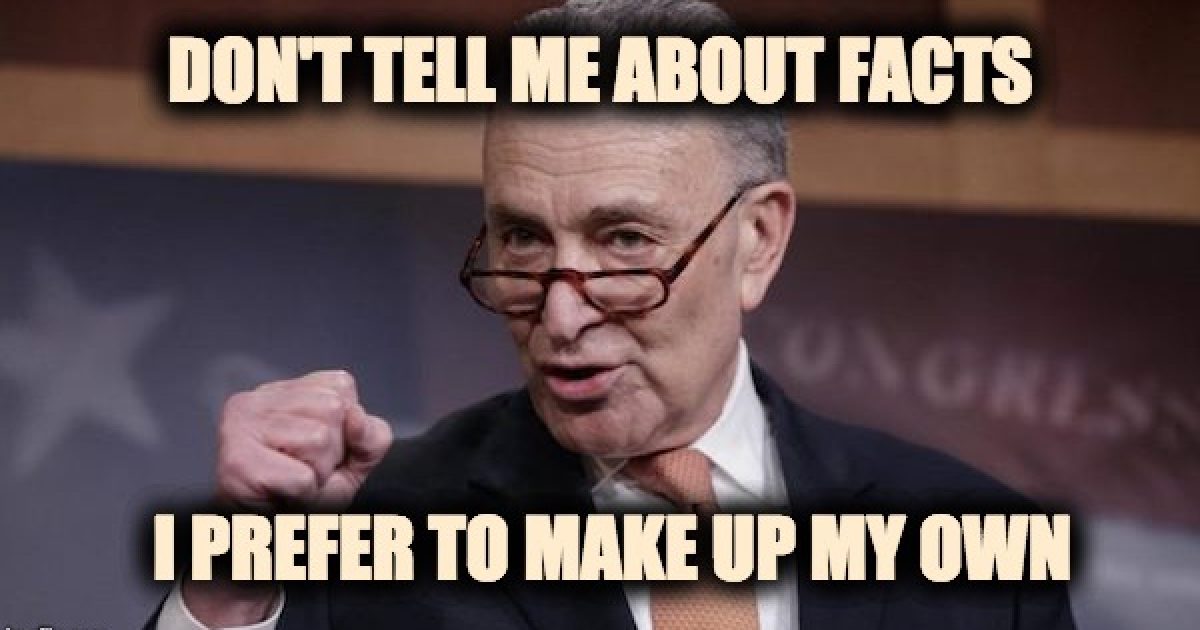 Chuck Schumer has his facts very wrong, well either that or he is losing his memory.

Soon after the death of Justice Antonin Scalia and President Obama’s nomination of Merrick Garland to replace him Senate Majority Mitch McConnell (R-KY) leader took to the Senate floor to express his opinion that the nominee to fill the Supreme Court vacancy should be selected by the next president:

“The next justice could fundamentally alter the direction of the Supreme Court and have a profound impact on our country, so of course the American people should have a say in the court’s direction,” he said.

“The Senate will continue to observe the ‘Biden Rule’ so the American people have a voice in this momentous decision. The American people may well elect a president who decides to nominate Judge Garland for Senate consideration. The next president may also nominate somebody very different. Either way, our view is this: Give the people a voice in filling this vacancy.”

Notice he said, President.  McConnell was talking about who should nominate the next supreme court justice, not when a vote should be held.

But Chuck “the Obstructor” Schumer, the senator from the formerly great state of New York either doesn’t have a good memory or because he doesn’t wear his glasses correctly was never able to read McConnell’s statement contends that the majority leader said something different:

Schumer said that Senate Majority Leader Mitch McConnell (R-Ky.) should show consistency and respect for his own precedent by delaying Senate confirmation proceedings for Kennedy’s successor until 2019 when a new Congress is seated.

“Millions of people are just months away from determining the senators who should vote to confirm or reject the president’s nominee and their voices deserve to be heard. He added, “anything by that would be the absolute height of hypocrisy.”

Now, Senator Schumer, we know that you don’t give a rat’s hiney about NY, or this country, only about your party, but facts are facts, McConnell was talking about who should nominate the next supreme court justice NOT who will get to confirm that nomination.

Since Hebert Hoover’s failed re-election campaign in 1932, the Senate hadn’t been asked to approve a Supreme Court nomination during a presidential election campaign. The thinking is that it would be impossible to keep the presidential race out of the court candidate debate.  The only exception was the nomination of Justice Kennedy, While Anthony Kennedy was approved during Reagan’s last year it was only because the Democrats slandered and voted down the nomination of a brilliant jurist Robert Bork to the court. Reagan’s second pick had to withdraw because he smoked pot.  Kennedy was nominated a few weeks after the Democratic Party hit job on Bork, and the Democratic Party-controlled Senate got around to confirming the nomination in February 1988.

Since the Kennedy nomination, three justices were nominated and confirmed during a mid-term election year Justice Souter (July 1990), Justice Breyer (May 1994), and Justice Kagen (May 2010). Schumer wasn’t in the Senate for the first two, but he did have the opportunity as a Senator to object to the vote on Kagen during a mid-term election year. But he didn’t oppose. Now that Donald Trump is president, Senator Schumer is objecting, thus proving that rather than Senator McConnell, Chuck Schumer is the hypocrite.