2nd Day Of Shootings In Seattle’s CHOP Zone. What Happened To Summer Of Love? 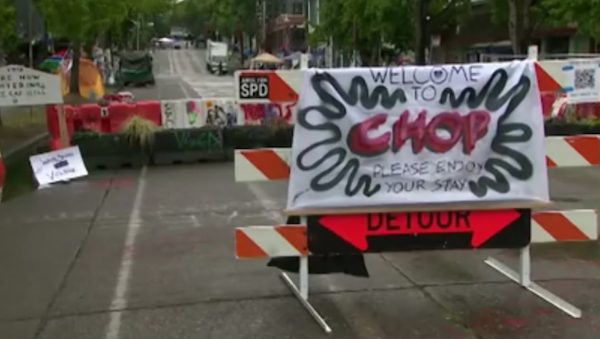 On June 11th, the Democratic mayor of the city, Jennifer Durkan said in an interview that she didn’t know how long the CHAZ takeover of part of Seattle might last, and added, “I don’t know. We could have a summer of love.” Saturday and Sunday were the first two days of summer. Each of those days saw gun violence in the CHAZ zone. Either the Democratic Party mayor was very wrong, or she has a bizarre definition of love. CHOP Zone

On Sunday night, Seattle police said they were investigating a second shooting in the lawless CHOP protest area in Capitol Hill.  A video that caught the gunshots was captured by someone live-streaming to Twitch.

Seattle’s KING-5 reported this was the second shooting in two days in the insurrectionist zone.  Harborview Medical Center spokeswoman Susan Gregg said one person was transported to the hospital about 11 pm Sunday with a gunshot wound and was listed in serious condition.

Police investigating reported shooting inside CHOP zone. One person at HMC with gun shot wound. Hearing reports of a second shooting, but have not be able to verify at this time. Conflicting reports, will update with more information when available.

Here’s a short video that includes the gunfire:

A much longer version is also available.

Watch last 20 mins of this Twitch stream which caught it

Then a guy comes up and steals the streamer’s phone https://t.co/s58g6p9wMK

Sunday’s shooting comes on the heels of an early shooting on Saturday that left a 19-year-old dead and injured another man, who’s in critical condition at Harborview. Police responded to the protest zone to find the victims but said they “were met by a violent crowd that prevented officers safe access to the victims.” And Seattle’s socialist city council member Kshama Sawant said the shooting was a “right-wing attack” and blamed President Trump for the shooting.

Ironically, after the Sunday shooting, protesters complained about the lack of police response.

11:53PM – We're hearing fireworks now in the area of the CHOP ZONE. Over an hour after multiple shooting incidents, there has been no police response in the area. No visible presence from @SeattlePD at all.

Honestly, what do they expect after the police were attacked after they tried to help the wounded on Saturday?

Sunday evening, Mayor “summer of love” Durkan finally said something about the shooting:

She said the city “will continue to make changes on Capitol Hill in partnership with Black-led community organizations, demonstrators, small businesses, residents, and trusted messengers who will center de-escalation.”

That de-escalation strategy hasn’t worked at all so far and probably won’t work. The only way the takeover of a piece of Seattle will end is by force. And the longer the Mayor waits, the worse the ending of the CHOP zone will be.