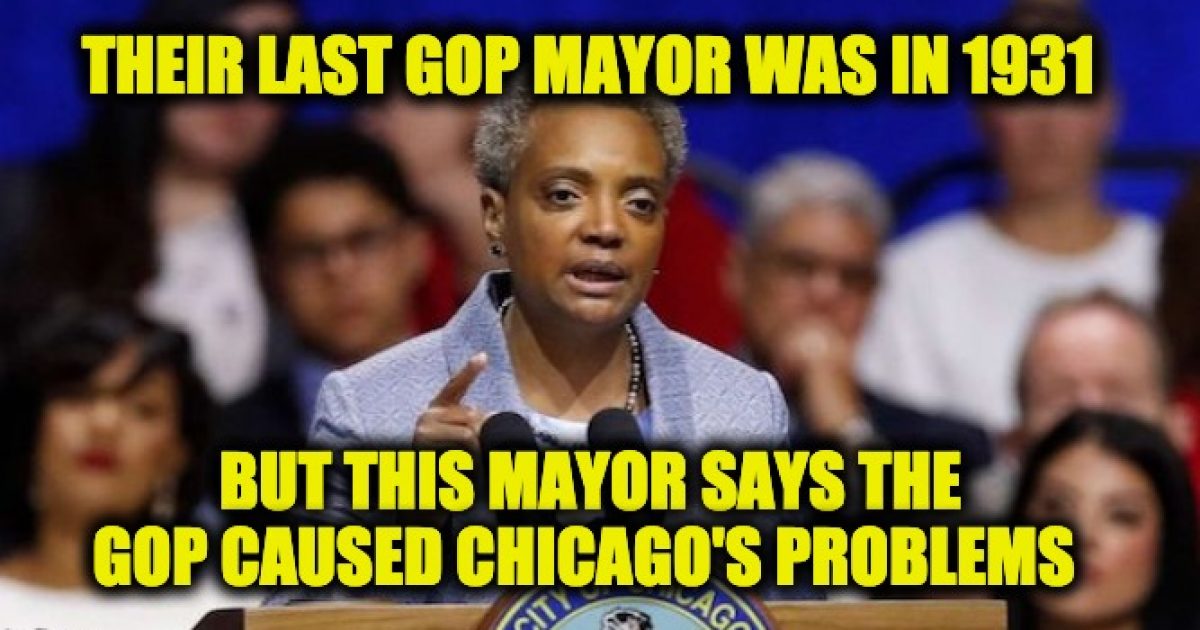 Chicago has long enjoyed the dubious distinction of being one of America’s most dangerous cities in terms of gun violence. The problem is so severe that in 2015, Yale University researchers did a study on the likelihood of being shot in Chicago. This past Labor Day was no exception to the rule, with 7 of 41 shooting victims dying of their injuries.

So who does the Windy City’s mayor blame for its epic gun violence? If you said “Republicans,” give yourself a cigar. Responding to a tweet by Ted Cruz in which the senator claimed that “gun control doesn’t work,” adding, “Look at Chicago,” Mayor Lori Lightfoot contended that the record gun violence in her city was the fault of Republicans who never pass “common sense” gun laws. She then tweeted a graphic to prove her point.

60% of illegal firearms recovered in Chicago come from outside IL—mostly from states dominated by coward Republicans like you who refuse to enact commonsense gun legislation. Keep our name out of your mouth. https://t.co/yVM4JHL3xy pic.twitter.com/pr613A3dpf

Wait. Republicans in Indiana and other predominantly red states are responsible for the violence in Chicago? This coming from a woman who doesn’t trust her own police department to protect her and so uses an outside group as her bodyguards?

But Chicago already has some of the nation’s most draconian gun control laws on its books and still can’t get a handle on the violence. How is its gun violence the fault of surrounding states?

A couple of Twitter users schooled the Chicago Mayor. Here are some examples.

yea I know right lol . I cant understand why people think if they just have stricter gun laws or just take everyone guns then we won't have any problems , seriously that's when our problems will begin for real !!!

But you are a lame, ineffective mayor.

The Mayor is trying to blame the actions of criminals on innocent citizens, and to wield that as a political club to avoid her responsibility for addressing long-term violence in Chicago.
She wants to deny innocent citizen's rights because of her failure to address crime.

Gee, Mayor, if there are so many guns in those GOP “coward” states that they can export them to IL, why don’t they have the same murder rate as your city? Oh, right, because Chicago is filled to the brim with psychopaths and run by Democrats who coddle them.

You must be mistaking, Obama administration was scandal free pic.twitter.com/fK7UYIOR2T

And why don't the States that have all these guns have the same gun violence?

I have to say I was really looking forward to you reforming and improving this city when you got elected. And here you are, blaming others instead of doing your job. It's gravely disappointing.

Guns don’t shoot themselves. Who’s pulling the trigger? Seriously doubt Republicans are sneaking in & shooting up Chicago every night. #2A #Trump2020

What’s alarming about the chart you tweeted : it takes 7 other states to add up to Illinois. Nice comparison. In my opinion, you just made Ted Cruz’s point pretty obvious. @tedcruz @SenTedCruz

What’s alarming about the chart you tweeted : it takes 7 other states to add up to Illinois. Nice comparison. In my opinion, you just made Ted Cruz’s point pretty obvious. @tedcruz @SenTedCruz

Its that Chicago has been run and controlled by Democrats for decades!

Well those are illegal guns and actually prove my point. People intent on getting a gun to do harm will