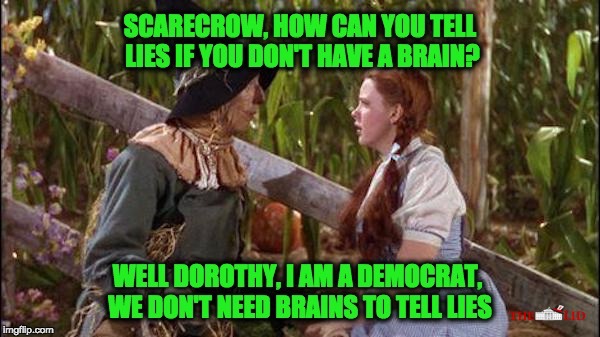 For a while I was chasing the minute-by-minute, second-by-second propaganda machine and their minions in the Democrat Party. The fake news mill machine was putting out fake titles aka Democratic Party lies , faster than a BushMaster AR-15 can empty a 30 round magazine of .223’s

In the immortal words of Susan Powter, STOP THE INSANITY!

Look, you have the freedom to spew any garbage you want and please continue to do so if you want to lose again in 2018, 20, 22, 24 and forever more. I gave you guys way too much credit. The war mantra you have used for decades cost you over 900 legislative seats, 38 governorships, 36 legislative houses and almost 90 partial legislative houses. Remember The War on: women, water, air, gays, lesbians, transgenders, immigrants, dogs, kittens and ____________ (fill it in with the flavor war of the moment.)

So you have switched strategies? Really? I don’t think so. You simply put a dress on a pig and think we all now believe he, she or it, whatever you prefer, is the new prom queen.

Funny. Where was that same sentiment when almost ALL of those agreeing to testify in eMailGate were given immunity and then pleaded the 5th? What sense does that make? With immunity, you can say anything you want in the hearing and be held for nothing. But then you plead the 5th saying you can’t answer on the grounds that it might incriminate you, even though you were granted the right to admit a crime and not be prosecuted for it? That makes no sense. And the Dems were silent. WHY? Because it benefited their Party and kept them safe.

Now they want to pound home that the Russians influenced the election and that the Trump team colluded with them. However, those same 17 intelligence agencies that the Dems say have information on the Russian involvement also say there is NO connection between the Trump team and the Russians (they don’t want to hear it). Influence? You mean because they may have (not proven they did) hacked the DNC server and released emails showing how Dems really feel about Jews and blacks and how they burned Bernie? Because those 17 agencies say that there was no tampering with any voting equipment that means the Russians didn’t steal votes. The hack just let Democrat voters see the real truth about how their Party sees them.

The Party now rarely uses the words “blue collar worker.” Instead, they are now referred to mostly as “low information voters” or “Middle America.” They are having trouble with their base and it’s sad.

In order to beat drug or alcohol addiction you first have to admit you have a problem and then work on the issues that drove you there. I love Nancy Pelosi and Chuck Schumer. They don’t see any problem with the way they’ve been operating. And people like them they will keep the Democrats in a steady decline because they refuse to admit why they lost and keep losing. They want to blame their losses on others and outside influences so they will never look inward and rethink their issues.

Democrat leadership will keep encouraging those that are committing violence in the streets and lashing out on social media with fake news to continue on. Please do, Americans are fed up with your teenage, out-of-control attitude. Americans are tired of your lunatic base of legislators that include the likes of Pelosi, Schumer, Waters, Jackson-Lee, Rangel and the list goes on and on.

It’s hard to take you seriously when you were fine with Hillary’s campaign manager’s brother being paid $175,000 to lift U.S. sanctions on Russia. Not a word! You said nothing when Obama greatly expanded presidential power through the use of Executive Orders. You said it was all legal and good!

You had nothing to say when Obama filled his White House with lobbyists after he said he wouldn’t. CNN, CBS, MSNBC, Nothing! You said nothing when Obama gave 47 of his fundraisers Administration jobs. Some even received ambassadorships to countries they had never been to or knew anything about!

You are outraged that Ivanka is taking a job inside the White House with ZERO pay! Yet Chelsea Clinton getting a job out of college paying $600k a year, being put on the board of Expedia for $300k a year, and is now being given a lifetime achievement award for being the daughter of the Clintons and being able to fleece NBC and Expedia and this is all fine with you!

You had no problem when Hillary’s net worth rose over $100 million as Secretary of State, in part, because her husband took money from foreign governments. The same ones wanting influence from the U.S. No call for any inquiry? Nope.

You said nothing after Obama’s net worth rose over $10 million as President. He must have had a great stock broker.

You are outraged that someone would even THINK that the Obama Administration would illegally wiretap anyone but seemed to have forgotten that Obama’s Justice Department wiretapped/surveilled reporters such as James Rosen and the AP.

You say you are for equality? Trump can’t issue immigration orders restricting travel from countries put on the list by Obama and Hillary. Yet you said nothing when Obama restricted immigration 6 times with Executive Orders. NOTHING!

When people on Trump’s team were seen with the Russian Ambassador you were outraged. What were they saying? What they were doing? But had no trouble with the lies told by Pelosi and Schumer who said they had never met with him, even while pictures surfaced showing they did. Not once, but several times. Let’s not forget Mr. Obama telling the Russian PM that he could be more flexible after the election! Why didn’t they ask him what he meant?

Some other issues you never said a word about: Hillary was fed debate questions. Obama and Hillary lied about a video and Benghazi. Obama’s White House held meetings with lobbyists in coffee shops near White House to avoid disclosure requirements. Hillary lied about her private use of a private email server as Secretary of State. The number of part-time and low paying jobs under the Obama recovery made up over 78% of the new jobs. The Supreme Court unanimously overturned Obama’s expansive use of Executive Power 9 times. How about when Obama dismissed charges filed by Bush Administration against New Black Panther Party members who were videotaped intimidating voters at a Philadelphia polling station during the 2008 election. Remember when Obama fired an inspector general after investigating an $850,000 AmeriCorps grant received by a nonprofit run by former NBA star and Obama supporter Kevin Johnson?

You have made all kinds of noise against Trump because you just hate him and hate does nasty things to people. Many say I can’t believe how Democrats are reacting and acting out. I say I can. I have been the recipient of it myself. It doesn’t matter what good I do, it only matters that I am a Right Wing Bible Believing White guy and that automatically makes me a bad guy. If I rescue 20 kids from downing in a lake and l couldn’t get the dog out in time then I would be labeled and animal hater.

You see they don’t want equality, they want control. Control of your actions, deeds, thoughts, words and more. They say resist. I say stand! Stand for everything that’s good for your kids and their future. Simply stand and don’t back down.