The Mexican Drug Cartels Are Driving Semi-Trucks Filled With Illegal Migrants And Drugs. 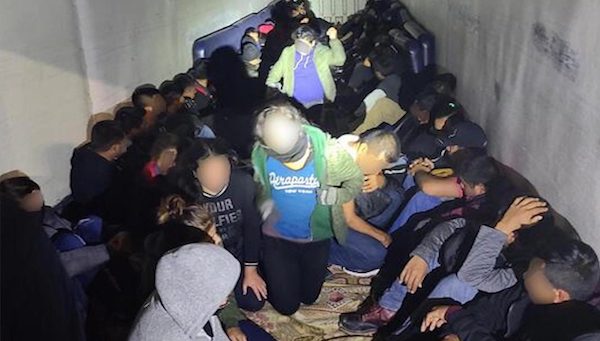 According to reports, the Mexican drug cartels are driving semi-trucks filled with illegal migrants and drugs to our southern border to push them across into the U.S.A. cartels driving 18 wheelers.

Thanks to Biden’s failed border policies, the criminal cartels are having a field day and making millions off of drugs and human trafficking. According to reports, tractor-trailers have been pulling up to poorly defended border areas in West Texas to unload their illegal cargo.

“It’s never been this busy,” one agent told Todd Bensman of the Center for Immigration Studies. He has been on the border charting the impact of Biden’s border-opening policies, dubbed “la invitacion” by illegal immigrants.

Bensman wrote in a new report, “Eighteen-wheeler tractor-trailer rigs and trucks of all sizes now pull right up to the river in unending succession to unload people and drug cargo in broad daylight along the long empty stretches of riverside territory. Police chases of immigrant transport vehicles are now commonplace in towns further inland for the first time. And border patrol agents, largely unreinforced despite new circumstances, are chasing groups through the desert day and night, losing most and strained beyond capacity to impact what’s happening, they say.”

The agent, only identified as a 10-year veteran, told Bensman, “I’ve never seen 18-wheelers out on the levy on the Mexican side like this, filled with God-only-knows what. It was predicted before the new administration came in, and it happened. Now the cartels are having a field day.”

Bensman also noted in his reports that the cartels are also sending teams all up and down our southern border to look for more vulnerable spots to use to cross into the United States.

“There’s no one watching,” a smuggler told Bensman.