Her Proposals Make It Harder For Law-Abiding Gun Owners, Does Nothing To Deter Criminals 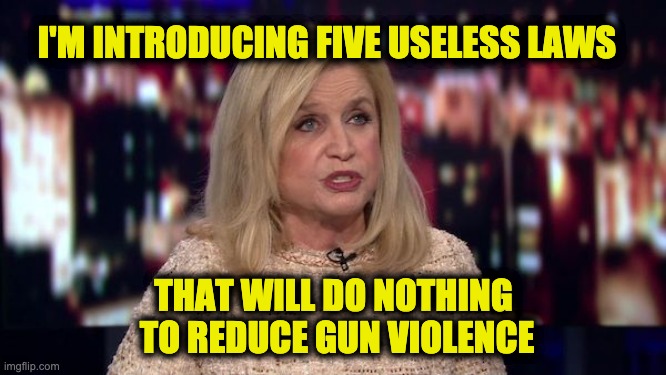 The fact that Democrats are in control of the House has led to the promotion of a gun control wish list. Rep Carolyn Maloney (D-NY) introduced five new gun control bills on Wednesday, saying that this was a “good opportunity” that would only require 10 Republican votes to pass.

We’re particularly positioned well to pass these bills that have been around a long time, and that the American people … overwhelmingly support. So we have a very good opportunity.

Americans overwhelmingly support ignoring the Bill of Rights? Even if it were true, the Constitution and the first ten amendments were written to protect Americans from the tyranny of the majority. In Federalist #51, “Madison discusses the way our republican government can serve as a check on the power of factions and the tyranny of the majority.”

Maloney’s package of five laws include:

Congresswoman Carolyn B. Maloney (D-NY) today joined with gun safety advocates to introduce a gun safety legislative package. This comes ahead of the three-year anniversary of the shooting at Marjory Stoneman Douglas High School in Parkland, FL and is part of Congresswoman Maloney’s pledge to honor all those lost to gun violence with action.

“As the third anniversary of the Parkland shooting approaches this Sunday, we are called to honor all victims of gun violence with action,” said Congresswoman Maloney. “There is no honor in failing to take action on gun safety. There is no honor in buckling to the will of the NRA and refusing to act to save lives. Thoughts and prayers are not enough – in fact, they are meaningless when not backed up by doing the work to effect real change. And so today, I am introducing a comprehensive gun safety package of five bills that would deliver on our promise to honor with action.”

According to NICS, the month of January saw 4.317 million background checks initiated a 62% increase over 2020. This was likely due to Joe Biden’s announced plans to destroy the 2nd Amendment.

Take note of some things about Rep Carolyn Maloney and her legislation:

Perhaps the most idiotic of her proposals is “the Gun Trafficking Prevention Act.” That bill seeks to make purchasing a gun for an unauthorized person a felony instead of a misdemeanor. Sounds great, right? Well, only if one believes that someone who uses a firearm in a criminal act will worry the person who got them the gun will be charged with a felony.

Although she mentions it in her description of her legislations, not one of the bills introduced by Rep Carolyn Maloney would have stopped the Parkland shooting. Why? Because Nikolas Cruz passed all the backgrounds. Because the Broward County Sheriff’s Office failed to follow up on incidents involving him. They all knew he had mental issues. Because the system in place with the Broward County school district didn’t punish violators but pushed the liberal narrative of the “kid-who-needs-a-break.”