Also Try To Brand CPAC Stage And Attendees As Nazi 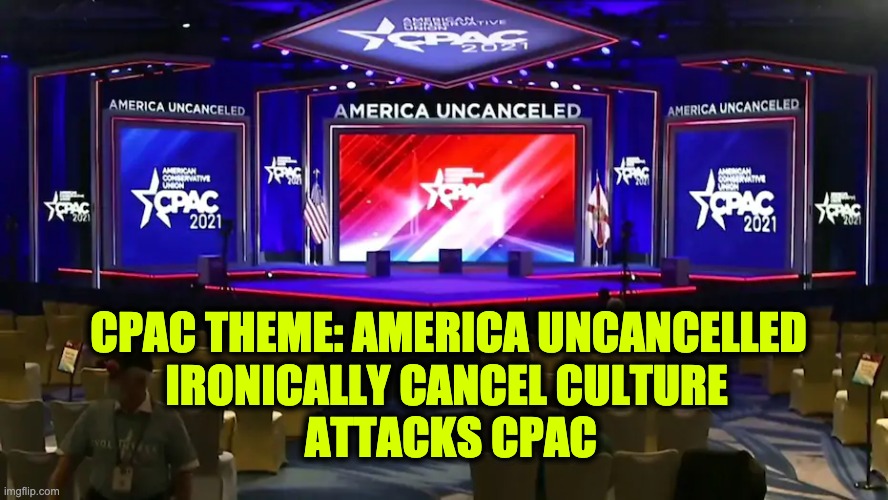 The left is frightened that if they are armed with the facts, Americans’ minds will be changed, and their leftist anti-freedom-programs will be rejected.  Their latest affront to free speech is suggesting that people boycott the Hyatt Hotel chain because the Hyatt Regency Hotel in Florida has been hosting the 2021 CPAC (Conservative Political Action Conference).  As part of their attack on CPAC, the cancel culture created lies trying to attach the conference to Nazism.  Ironically the theme of the 2021 conference is  “America Uncancelled.”  cancel culture attacks CPAC 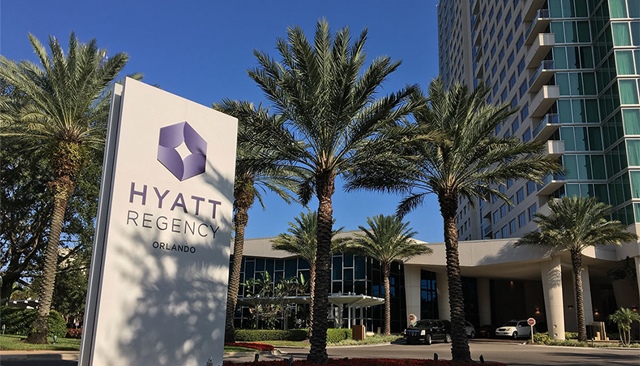 For its part, the Hyatt issued this statement:

We take pride in operating a highly inclusive environment and we believe that the facilitation of gatherings is a central element of what we do as a hospitality company. We believe in the right of individuals and organizations to peacefully express their views, independent of the degree to which the perspectives of those hosting meetings and events at our hotels align with ours. Our own values support a culture that is characterized by empathy, respect and diversity of opinions and backgrounds, and we strive to bring this to light through what we do and how we engage with those in our care.

Hosting the four-day event at CPAC is expected to bring millions of dollars into the Orlando area, regardless of the leftist cancel culture.

Leftists do not believe in free speech.  It’s just the way it is. In particular, people like Alyssa Milano, who had an acting career before she went nuts.  Two years ago, her call for a sex strike led to nothing but derision for her opinions. Her CPAC opinion should generate the same negative reaction by anyone who believes in the U.S. Constitution.

But it got worse,  looking for something to complain about, the Leftist cancel culture took issue with the shape of the stage and the people who attended:

Are you okay with Nazi symbols being used on your properties?

Because if you fail to speak out & do something about this immediately, I’ll be sure to no longer patronize any of your properties ever again. #CPAC2021 #CPACstage #CPACNazi pic.twitter.com/beFauYAMwO

CPAC is a conference for conservatives. The Nazis’ full name was National Socialist German Workers’ Party. In other words, the Nazi party was a big-government leftist socialist party.

In 2017 after white supremacist Richard Spencer was caught trying to sneak into the CPAC and tossed out, American Conservative Union’s (ACU) Executive Director Dan Schneider made a speech from the main stage explaining that Fascism and white nationalism is abhorrent to conservatism.

Citing a meeting of white nationalists in Washington in November in which attendees made Nazi salutes and yelled “Hail Trump, hail our people, hail victory,” Schneider said that they “spew hatred.”

Schneider said that conservatives value individual rights, while the alt-right are “fascists” who “want big government control to impose their will on you.” He argued that “fascism is actually more akin to socialism” and said the alt-right is “not like anybody here.”

Not only did CPAC 2021 hold morning and evening Jewish minyans (services) each day but a Shabbos dinner, a Shabbos luncheon, Purim Party, and a Purim luncheon.  Sorry leftists, but if CPAC supported Nazism or white supremacy, it wouldn’t have daily Jewish prayers, celebrate Shabbos or Purim. 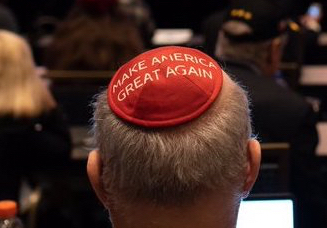 While I could not attend CPAC in person this year, I’ve attended ten times during the past dozen years. I wore a yarmulka in each of those years and never faced any Antisemitism (the picture above is me at CPAC 2020). If the ACU had the least bit of Nazi culture or themes, this writer would regularly attack them in this space, columns elsewhere, and during media appearances. Instead, I attend CPAC and their on-line seminars throughout the year and writing about their events.

Ironically this year’s CPAC theme is fighting the cancel culture. The leftist cancel culture wants to destroy anything and everyone who disagrees with their opinions.  They see CPAC as a danger and fight it with lies—just like the Bolsheviks, Nazis, Mao, Castro, and other leftist movements and despots used lies against their political opponents.