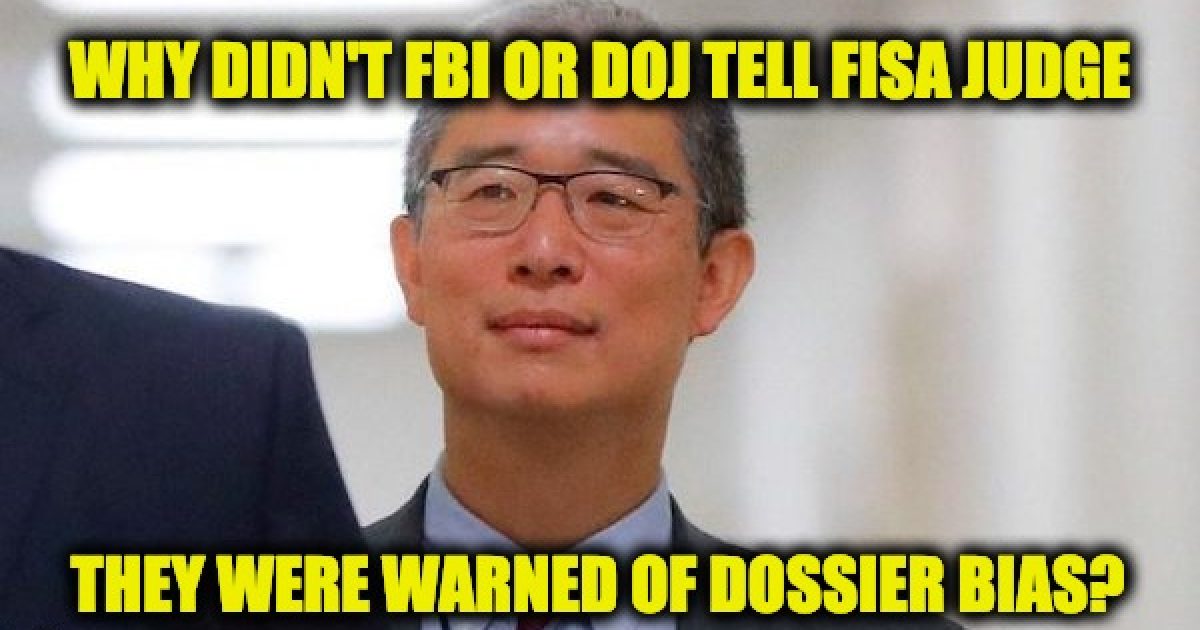 In July and August 2016 Bruce Ohr the #4 person in the DOJ whose wife worked for Fusion GPS (the company that hired Christopher Steele to compile the Russian dossier)  briefed senior staff of the FBI and DOJ about Steele’s work. During those briefing, Ohr explicitly cautioned his colleagues that Steele’s dossier work was opposition research for the Hillary Clinton campaign and the people behind it hated Donald Trump. Therefore it might be biased.

Ohr’s warnings came at the same time the FBI used began its investigation of the Trump campaign and three months before they used the dossier as a big part of their FISA surveillance application to monitor Carter Page (10/21/16). Apparently, Ohr provided this information to the House Oversight and Judiciary Committees probes in a closed-door transcribed interview in August 2008.

Per John Solomon at the Hill, Ohr testified:

“I certainly told the FBI that Fusion GPS was working with, doing opposition research on Donald Trump,” Ohr told congressional investigators, adding that he warned the FBI that Steele expressed bias during their conversations.

I provided information to the FBI when I thought Christopher Steele was, as I said, desperate that Trump not be elected,” he added. “So, yes, of course I provided that to the FBI.”

In other words, he told the FBI Steele was biased, but the FBI used the information to get FISA warrant anyway.

He also told the committee that Glenn Simpson who ran Fusion GPS  was also anti-Trump. Per Catherine Herridge:

Ohr then was asked: “Were the Department of Justice and the FBI also aware of Glenn Simpson’s bias against Donald Trump?” Glenn Simpson is the co-founder of Fusion GPS. Ohr’s wife, Nellie, worked for Simpson.

Ohr stated: “I certainly told the FBI that Fusion GPS was working with – doing opposition research on Donald Trump.”

Herridge also provided a list of some of the people Ohr warned many of them the usual suspects:

“Andy McCabe, yes and met with him and Lisa Page and provided information to him. I subsequently met with Lisa Page, Peter Strzok, and eventually (an FBI agent). And I also provided this information to people in the criminal division specifically Bruce Swartz, Zainab Ahmad, Andrew Weissmann.”

According to online bios, Bruce Swartz was identified as a deputy assistant attorney general. Andrew Weissmann was chief of the DOJ Criminal Division’s Fraud Section before becoming a senior prosecutor on Mueller’s team handling the case of former Trump campaign chairman Paul Manafort. According to a May 2017 New Yorker profile, Zainab Ahmad worked at the U.S. Attorney’s office in the Eastern District of New York and took a leave to work for then-Attorney General Loretta Lynch at the Justice Department’s Washington headquarters. Ahmad is now assigned to the special counsel’s investigation.

So the foundation of the special counsel’s investigation and the FISA warrants, the Steele dossier was identified as possibly rotten, to the FBI, DOJ, and people who would eventually work for Mueller. If the foundation is rotten, the entire thing should fall, but it is being kept alive by Democrats and other anti-Trumpers who dream of throwing this President out of office.

Ohr’s testimony also exposed a congressman Adam Schiff (D-CA) lie. When the Republicans started pointing out Ohr’s connection to Fusion and Steele those concerns were addressed in a memo by Adam Schiff’s office:

The memo from Rep. Adam Schiff’s (D-Calif.) team claimed that Ohr’s contacts with the FBI only began “weeks after the election and more than a month after the Court approved the initial FISA application.”

Unless they changed the Gregorian calendar without telling people, Ohr’s contacts with the FBI began a three months before the election and the FISA application for the Judge’s approval. If the calendar hasn’t changed recently than Adam Schiff lied.

None of the information provided by Ohr was included in the FISA document provided to a Judge to secure a warrant so they could begin spying on Carter Page and investigating the Trump campaign.

All of this gives more credence to the president’s claim the Russiagate investigation is nothing but a witch-hunt.