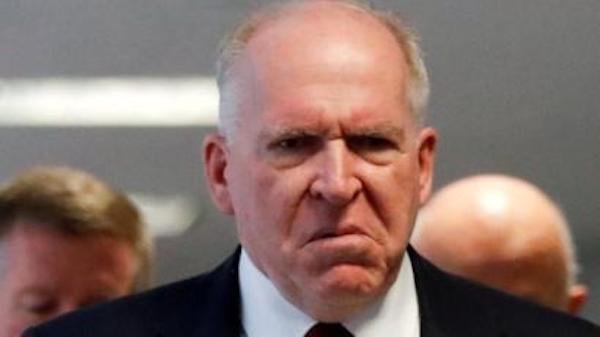 U.S. Attorney John Durham is investigating the origins of the Russia inquiry. The NY Times Is reporting that Durham is examining the role of the former C.I.A. director John Brennan “in how the intelligence community assessed Russia’s 2016 election interference, according to three people briefed on the inquiry.” Brennan’s role Russiagate

Durham is conducting a wide-ranging investigation of the origins of the Trump-Russia probe. Unlike the Horowtiz report, Durham running a full-fledged criminal investigation.  Durham’s inquiry is broad beyond the confines DOJ and FBI, he can subpoena people who don’t presently work for the government and can impanel a grand jury.

Per the Times, Durham

…has requested Mr. Brennan’s emails, call logs, and other documents from the C.I.A., according to a person briefed on his inquiry. He wants to learn what Mr. Brennan told other officials, including the former F.B.I. director James B. Comey, about his and the C.I.A.’s views of a notorious dossier of assertions about Russia and Trump associates.

Mr. Durham is also examining whether Mr. Brennan privately contradicted his public comments, including May 2017 testimony to Congress, about both the dossier and about any debate among the intelligence agencies over their conclusions on Russia’s interference, the people said

Brennan has already been suspected of committing perjury during his congressional testimony:

Former CIA Director John Brennan’s insistence that the salacious and unverified Steele dossier was not part of the official Intelligence Community Assessment on Russian interference in the 2016 election is being contradicted by two top former officials.

Recently retired National Security Agency Director Michael Rogers stated in a classified letter to Congress that the Clinton campaign-funded memos did factor into the ICA. And James Clapper, Director of National Intelligence under President Obama, conceded in a recent CNN interview that the assessment was based on “some of the substantive content of the dossier.” Without elaborating, he maintained that “we were able to corroborate” certain allegations.

These accounts are at odds with Brennan’s May 2017 testimony before the House Intelligence Committee that the Steele dossier  was “not in any way used as the basis for the intelligence community’s assessment” that Russia interfered in the election to help elect Donald Trump. Brennan has repeated this claim numerous times, including in February on “Meet the Press.”

Former CIA field operations officer Gene Coyle, a 30-year agency veteran who served under Brennan, said last year that Brennan was “known as the greatest sycophant in the history of the CIA, and a supporter of Hillary Clinton before the election…I find it hard to put any real credence in anything that the man says,” he added.

Defenders of Mr. Brennan have long maintained he did nothing wrong and properly sounded the alarm on Russian interference in the 2016 election. Brennan told MSNBC this fall that he would answer Mr. Durham’s questions if asked.

“I feel good about what it is we did as an intelligence community, and I feel very confident and comfortable with what I did, so I have no qualms whatsoever about talking with investigators who are going to be looking at this in a fair and appropriate manner,” Mr. Brennan said.

Perhaps he feels good because he has a history of being a good liar.

Per the NY Times, “It is not clear how much information the C.I.A. has provided investigators, and a C.I.A. spokesman declined to comment. The intelligence agencies are continuing to cooperate with Mr. Durham’s investigation, a person familiar with the inquiry said.”

Brennan better be accurate in his contention he did nothing wrong. John Durham’s report will not generate a “vanilla” conclusion like the Horowitz report.If there is a scintilla of a lead  that Brennan broke the law Durham will find it, follow it to get more evidence, build a case   and John Brennan will then do a traditional “perp walk.” That would be so cool.