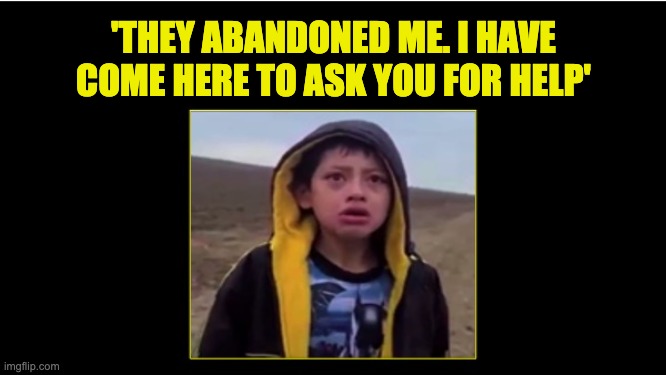 “‘They abandoned me. I have come here to ask you for help,’ the frightened 7-year-old boy said.” The group helping him sneak across the southern border abandoned him–left him behind in the desert—overnight—in a foreign country—where he doesn’t speak the language. Is that what President Joe Biden meant by a humane border policy? boy abandoned in desert

WHY are we incentivizing criminal cartels to do this? How many examples of abused children does Biden need to see before he starts taking this seriously?

President Trump stopped most of the illegal aliens from coming to the border, emphasizing ending the cartels’ human smuggling.  Biden has not only created an unprecedented surge of illegals crossing the border but has been very good for the Mexican organized crime cartels. These organized crime groups are getting huge] paydays thanks to President Biden tearing apart President Trump’s policies. And as they make money off of poor families and little children, they strive to make even more. The cartels do not value the lives of the people they are sending across the border. They are commodities that can be easily replaced. There are horrible stories of rapes, torture, and deaths of people who are paying the cartels to help them sneak across the border. In a recent horrible example, they threw a six-month-old baby into the Rio Grande. Thankfully that baby was saved by the border patrol, as was the boy found in the desert.

NEW – Moment sobbing migrant boy approaches Texas border patrol after being abandoned and spending the night in the desert: "Somebody could kidnap me, I'm scared"pic.twitter.com/xxE3UPWMxw

The little 7-year-old boy is fortunate to still be alive. There are so many ways his story could have ended with grim finality.

The boy can be seen walking towards the Border Patrol agent and asking for assistance because he had been dumped near the Rio Grande.

‘It’s that I was coming with a group and they abandoned me and I do not know where they are at,’ the child told the officer in Spanish.

The boy is one of hundreds of unaccompanied children crossing the border each day.

New government statistics released last week revealed that 171,000 migrants were caught by US authorities at the border in March – the highest monthly total in two decades and the latest sign of the mounting humanitarian challenge confronting President Joe Biden.

(…) In the video of the boy begging for help, the agent asks: ‘You do not know where they are at? They left you alone?’

The distraught child, struggling to maintain his composure, had apparently been sent to the United States by his parents, who were not part of the migrant group he had been traveling with.

‘At the end they abandoned me. I have come here to ask you for help,’ the frightened boy said.

The agent asked the boy if he had been instructed ‘to come ask for help,’ but the the child replied, ‘no, I am coming because if I did not, where am I going to go? Somebody could abduct me, kidnap me. I am scared.’

Below is a shorter video of the boy approaching the CBP agent. This video has English subtitles.