BLM Utah: US Flag Is A ‘Symbol Of Hatred,’ Everyone Flying Flag Is Racist 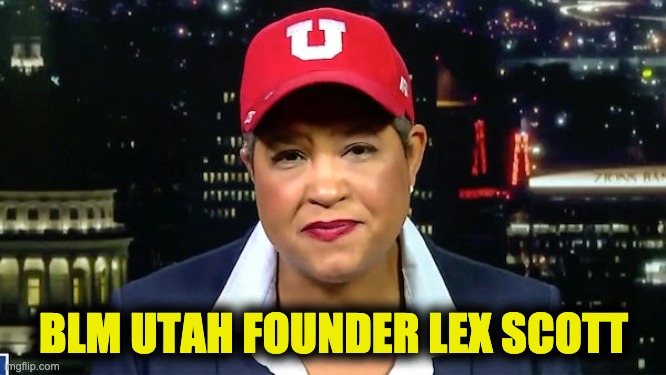 Fox News reported that Utah’s Black Lives Matter Chapter posted a hate-filled screed on Facebook over the Fourth of July weekend, calling the United States flag a “symbol of hatred,” and said in no uncertain terms that everyone who flies it is a racist. BLM Utah

On top of that, the chapter, which is reportedly not officially affiliated with the national BLM group, said on Facebook that it questions the intelligence of anyone who displays the flag.

They call the flag of the freest nation in the world a symbol of hate— and they think we’re not intelligent?


Fox said Lex Scott, the group’s founder, confirmed the post on Wednesday and further said it generated a lot of heat from many who were offended by the statement. Many of the offended ones came from a special group called Americans.

“Ever since we put up the post, our page has been flooded with hatred from people who fly the flag,” she reportedly said. “And we want to thank those people for proving our point.”

The group limited who can respond to their hateful screed and doubled down:

Welcome racists. We know you are big mad about the racist flag post. You will not be heard here. You will be blocked and your comments will be deleted. We will be donating $1 to AOC’s election campaign for every racist that we block. Thank you for contributing to the re-election of AOC. We will jot down your names and attribute each donation to you. Comment below to help her once again head to Washington

Donating to AOC? Well, that proves they are the ones with no intelligence.

The group then vowed to “destroy the systems that continue to give you the power to marginalize people of color. Period.” 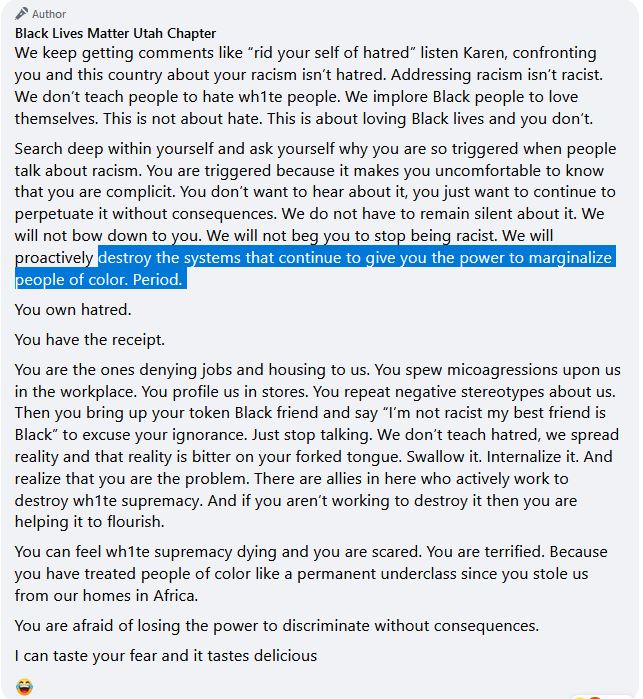 Sorry but that ain’t fear you taste—it’s disgust! Disgust that someone who lives in a country so free, they can make comments like the above without any repercussions.  BTW the color of my skin or yours doesn’t make either one of us a supremacist.

You claim I stole people from their homes in Africa. There were some Americans who did that, and it was a horrible blot on American history. There were also hundreds of thousands of Union soldiers who died in a war to set those Africans free.

But you wrote “you.”  When African’s were being brought here and enslaved, this “you’s” family was in Odesa Ukraine, getting beaten by the Cossacks.  We were welcomed when we came here at the end of the 19th century. It was only the last half-century that the liberals in America reignited Antisemitism. Despite the hatred coming from liberals, I am proud that I’m an American and believe the flag is a symbol of freedom.

When asked how she would respond to people who say the American flag is for all Americans, she said that those who are offended by her group’s statement should take it up with hate groups like the Ku Klux Klan, which she said proudly wave Old Glory at their rallies.

“I would ask those people if they ever showed outrage when the Ku Klux Klan marched down the street holding that flag, if they ever showed outrage last week when Patriot Front, a White supremacist group, was marching through Philadelphia holding that flag, if they feel outraged that the Three Percenters have co-opted their flag, that the Proud Boys have co-opted their flag,” she said. “If they have never shown outrage when hate groups use their symbol for hatred, then they need to not come to us – they need to go directly to those groups. When you allow a hate group to fly that flag in the name of hatred, and you say nothing, and you do nothing, you send a message to us that you agree with their messaging. You agree with that hate, and you condone it.”

She said she receives hate messages via Facebook on a daily basis and many of the senders have American flags on their profiles. “If you see that every person that hates you is carrying an American flag how would you feel about that flag?” she continued. “I feel fear. That is not up for debate. I feel like the person flying it is racist, because every racist that I have come in contact with is either wearing that flag or flying that flag. I feel as if I should avoid that person because they may be dangerous.”

She recently appeared on Fox with Utah Sen. Mike Lee, a Republican, to discuss issues regarding police reform:

One commenter at Fox accurately noted:

It’s just amazing … that these people decrying the “racist symbol” can’t grasp the concept of that symbol being responsible for their freedom to do so. Only in the United States is that possible…and that flag represents that freedom.

There is the possibility BLM Utah wrote their creed because they have mental issues.  After all, they are from Utah and could have caught Mitt Romney disease from Senator Mittens.