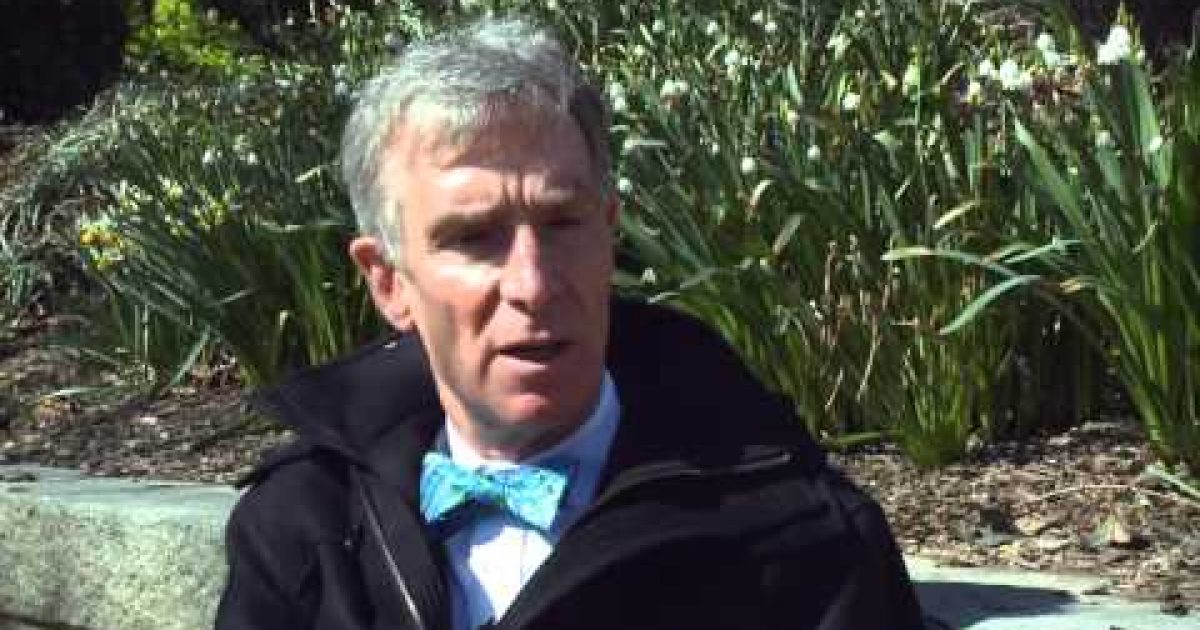 Bill Nye, who goes by the nom de plume, “the science guy,” said in an interview with Climate Depot’s Marc Morano, that he doesn’t mind the the idea of jailing people who are skeptical of the man-made global warming hypothesis.  Nye’s attack on the First Amendment would be an extreme one for anybody. But, when one considers that the children’s TV entertainer is not a scientist and has, at times, even been ridiculed by climate experts, his comment are even more outrageous.

During the interview Morano asked Nye about Robert F. Kennedy’s call to jail climate skeptics for treason and lock them up at The Hague (video of the segment is at bottom of this post)

Morano: “We interviewed Robert F. Kennedy Jr., the environmentalists. He said climate ‘deniers’, his words, Energy CEO’s belong at the Hague with three square meals and a cot with all of the other war criminals. What is your thought on that and do you think some of the rhetoric on your side — as I am sure both sides — gets too carried away. What is your thought on jailing skeptics as war criminals?”

​Nye: “Well, we’ll see what happens. Was it appropriate to jail the guys from ENRON?”

Nye: “So, we will see what happens. Was it appropriate to jail people from the cigarette industry who insisted that this addictive product was not addictive and so on? And you think about in these cases — for me as a taxpayer and voter — the introduction of this extreme doubt about climate change is affecting my quality of life as a public citizen. So I can see where people are very concerned about this and are pursuing criminal investigations as well as engaging in discussion like this.”

Morano also asked Nye about the “chilling effect” of threatening investigations and jail to scientists who dissent on man-made global warming claims.

Nye who has been a vocal supporter of the climate change hypothesis isn’t more qualified to speak about climate science than any other non-scientist. He has a B.S. in mechanical engineering from Cornell University, and worked at Boeing in the mechanical engineering department. His entry into TV was not because of any science expertise but because he won a Steve Martin look-alike contest and began moonlight as a stand-up comic by night. Eventually he quit Boeing and became a comedy writer and performer on a sketch comedy television show in Seattle, Washington, called Almost Live! The host of the show, Ross Shafer, suggested he do some scientific demonstrations in a six-minute segment, and take on the nickname “The Science Guy”.

At times Nye gets treated like Rodney Dangerfield and gets no respect, like the time  Washington Post’s weather editor Jason Samenow (who has a master’s degree in atmospheric science from the University of Wisconsin) viewed Nye speaking about climate change on MSNBC, and was motivated to write a column absolutely eviscerating the children’s TV star. Samenow said that Nye’s performance “was one of the most flawed discussions of meteorology I’ve ever seen on a national network.”  He continued:

In likening the blizzard and hurricane Sandy, Nye implies both storms originated off the coast from Africa, which is wrong. (…) Nye then draws an absurd comparison between East Coast storms and West Coast storms in an attempt to equate them.

“If you live on the West Coast … that same type of storm is called a Sou’wester,” Nye says. “If you go to the sailboat store you can get a Nor’easter hat in New England but it’s a Sou’wester hat in Seattle.”

Big problem: storms typically hit Seattle from the west not from the south. They don’t form off the Pacific coast of Los Angeles or San Francisco and charge northward. In my entire life, (until watching Nye’s comments) I had never heard the term “Sou’wester” used in reference to a West Coast storm (a google search reveals there is an apartment complex and a lodge with such a name in the region – but I couldn’t find a meteorological reference).

There is a good meteorological reason for the lack of “Sou’westers”: Whereas the warm Gulf Stream current creates a zone of temperature contrast that allows storms to form along the East Coast and move northward, there’s no equivalent current in the Pacific to steer storms up the West Coast. I challenge a reader to find a “Sou’wester hat” for sale…

Nye then makes a convoluted comment about spin in different parts of the storm that serves as a non-sensical transition into a discussion of climate change.

When he is not pushing the global warming or telling Jews to be more neighborly Nye tries to teach people that the Bible is false. In the past Nye has created videos explaining why he believed that creationism is bad for children, explained that the Biblical story of Noah’s Ark was fiction, amongst other attacks on people’s faith.

Based on his background Nye should not be presenting himself as an expert in climate science but rather someone with expertise in mechanical engineering, looking like Steve Martin, sketch comedy, or children’s television. However, thanks to the First Amendment to the Constitution, Nye has the right to present himself as anything he wishes without getting thrown in jail, the same way the Amendment protects the so called skeptics who believe the science disproves the man-made climate hypothesis.