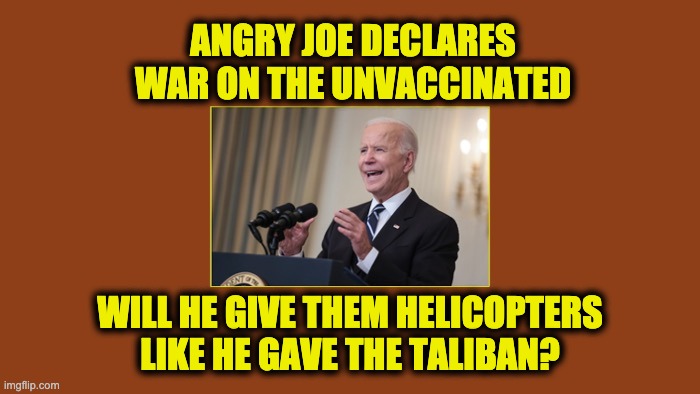 On Thursday, an angry Joe Biden appeared on national TV to tell the nation that he was mandating that all federal employees will be required to take a coronavirus vaccine. He also claimed that he had the power to force every business of 100 employees or more to force their employees to vax.  Biden’s unconstitutional vaccine mandate

A quickly growing number of GOP governors are already pushing back against Joe Biden’s new vaccine mandates, most calling the orders illegal. And the RNC is saying it intends to sue to stop it.

Biden brashly claimed that he has the power to order the Department of Labor’s Occupational Safety and Health Administration (OSHA) to enforce this mandate, “to ensure their workforce is fully vaccinated or require any workers who remain unvaccinated to produce a negative test result on at least a weekly basis before coming to work.”

Even if he has the power he thinks he has, it is doubtful that he considered what his unconstitutional order will do to employment. Those companies on the bubble, with more than 100 employees but not much more, may decide to go without a few employees to get under the mandate level.  Actions like that were taken when Obamacare was implemented,

Here are some of the Governors’ reactions, per Daily Wire:

Finally, the Republican National Committee says it is prepared to take Biden to court to stop his unconstitutional power grab.

“Today, Republican National Committee (RNC) Chairwoman Ronna McDaniel announced the RNC’s intention to sue the Biden administration on their unconstitutional mandate,” the RNC said in an email to supporters.

“Joe Biden told Americans when he was elected that he would not impose vaccine mandates. He lied. Now small businesses, workers, and families across the country will pay the price. Like many Americans, I am pro-vaccine and anti-mandate. Many small businesses and workers do not have the money or legal resources to fight Biden’s unconstitutional actions and authoritarian decrees, but when his decree goes into effect, the RNC will sue the administration to protect Americans and their liberties,” McDaniel said.

Biden’s anger-infused vaccine mandate is not likely to pass constitutional muster either. It also doesn’t provide equal treatment under the law as postal workers have been excluded from the mandate for no reason other than it’s a union that’s friendly to his campaign.

Foolish RT from WH chief of staff. He said the quiet part out loud.

As mentioned before on this site, I have had the two Pfizer shots, as had my wife and children. Personally, my recommendation to everyone is to consult with their doctor and, if given the okay, get vaccinated. However, it is your choice to decide if and when you get the poke, not the choice of the federal, state, or local governments.