Biden’s Racist Farm Aid Package Gets Slapped Down By Judge 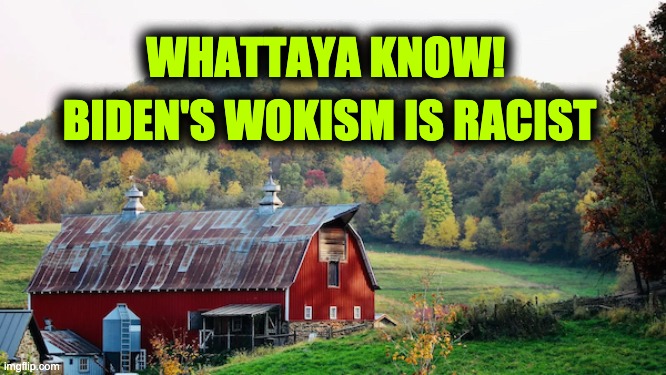 A group of white farmers has gathered to sue the federal government over aid programs that are race-based and exclude white people. The farmers say that they are excluded from programs offered by the Biden administration “solely due to their race.” Now a Federal Judge placed a temporary restraining order against Biden’s racist policy.

Per the Milwaukee Journal Sentinel, the program “pays up to 120% of direct or guaranteed farm loan balances for producers who are Black, American Indian or Alaskan Native, Hispanic or Latino, and Asian American or Pacific Islander.” But white producers do not qualify.

For a guy who puts race policy at the cornerstone of his presidential legacy, it sure didn’t take long for courts to shoot Biden down as a racist. One hundred forty-one days, to be precise.

When we say that JOE is a racist, we, of course, mean that it took HIS signature to put the legislation in question into law. AND this legislation was unilaterally supported by his party. AND there are aspects of his legislation that were struck down by the courts because their explicit racial language is contrary to the Constitution.

Not a single Republican voted for this legislation. So any implications of this decision reflect solely upon the Democrat party — including Kamala Harris, who was needed as the tiebreaking vote.

Sorry, Joe, calling it ‘anti-racist’ doesn’t make it somehow LESS unconstitutional. (Which means a whole lot of his party’s OTHER racialized policies are ripe for exactly the same kind of challenge as we see in this case.)

At issue is a claim of explicitly racist and discriminatory government policy:

As part of the American Rescue Plan Act signed in March, President Joe Biden’s administration rolled out a loan forgiveness program intended to provide billions of dollars in debt relief to socially disadvantaged farmers and ranchers, namely those who are Black, Hispanic or Latino, American Indian, Asian American or Pacific Islander.

The Wisconsin Institute for Law & Liberty, a conservative advocacy group also known as WILL, sued Biden’s Agriculture Secretary Tom Vilsack and Zach Ducheneaux, chief of the Farm Service Agency, in April on behalf of a group of white farmers claiming they are being unlawfully denied a government benefit solely due to the color of their skin.

The number of plaintiffs has grown to a dozen since the complaint was filed, including white farmers and ranchers from Wisconsin, Minnesota, South Dakota, Missouri, Ohio, Iowa, Arkansas, Oregon and Kentucky, who claim denying them the program’s benefits– including payment of up to 120% of a socially disadvantaged farmer’s debt– violates their constitutional rights.

The judge, in this case, has put up a temporary restraining order against the policy while he hears the case, but the wording of his ruling makes it entirely clear what his initial concerns are.

Griesbach, a George W. Bush appointee, wrote the administration officials “have not established that the loan forgiveness program targets a specific episode of past or present discrimination,” instead only pointing to “statistical and anecdotal evidence of a history of discrimination within the agriculture industry.”

The judge offered that the government can implement race-neutral financial programs to help struggling farmers and ranchers, or promote outreach and education on the matter, but it cannot provide help to some farmers and not others on the basis of race.

That last sentence perfectly captures the fatal flaw in the so-called anti-racist movement.

The anti-racist ideology — which lies at the very heart of the objections to Critical Race Theory being embraced by Biden’s government — is founded on the thinking that two wrongs really DO make a right. They believe that past injustices are best solved by serving up a fresh round of injustices today.

If their party doesn’t have the good sense to see this for the evil that it is, let us bring them before the courts to show the whole country how racially misguided they really are.

Let’s all raise a glass to the farmers who took this issue to court. Real racism should have no place in this country — not even the fashionable kind.