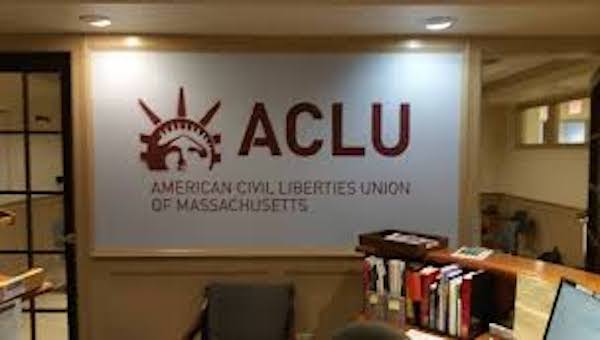 If Team Obama played fast and loose with the law, using the government to harm his enemies, team Biden has decided they’re above the law entirely.

From Fast and Furious, to weaponizing the IRS, to the CIA spying on a Senate committee, to the Obama-era treatment of journalists, Obama took a lot of liberties with our … well … liberties.

And don’t even get us started with General Flynn or the Crossfire Hurricane debacle.

But as bad as Obama and Holder were in their day, Biden and Garland are starting to do those acts of corruption look jayvee by comparison.

Even the hard-left ACLU is reading Biden’s DOJ the riot act after the lawless stunt they just pulled while going after the people from Project Veritas.

Project Veritas has a habit of uncovering stories the left wants to keep buried.

This includes stories about the Chinavirus. The FBI took a particular interest in Project Veritas’ reporting about Pfizer, as was discovered by a Judicial Watch FOIA Request — HEY, FBI: What’s This About You Investigating Journalists For The ‘Sin’ Of Exposing Pfizer?

But there is evidence of a much more grievous rights abuse underway.

As a cherry on top, this includes action that the courts have expressly forbidden the government from taking against Project Veritas while their case is pending.

From the Project Veritas Press release (with the call-to-action portion removed):

Microsoft Corporation bravely turned over documents to us showing that the Department of Justice (DOJ) has been spying on my journalists and I well before the FBI raided our homes this past November.

This is an extreme abridgment to the First Amendment.

The DOJ had used secret warrants to obtain our privileged, and constitutionally protected, communications and contacts from Microsoft corporation of various journalists here at Project Veritas.

The DOJ also went BEHIND a federal court judge’s back to obtain an extension of the non-disclosure orders requiring Microsoft to conceal the fact that government ALREADY had all these materials.

Despite multiple opportunities to do so, the DOJ did not publicly disclose the orders, warrants, or subpoenas.

We are an American journalist organization which exposes various forms of misconduct. In today’s world, what that gets you is a politically-motivated DOJ/FBI treading all over journalists’ protections.

Protecting the First Amendment has NEVER been so critical.

This battle is worth fighting, but we can’t do it without your support.

You can help us continue our investigative journalism to expose corruption. We will not be intimidated.

My journalists and I will not back down. No matter what is thrown at us.

As our lawyer on this matter, Paul Calli, stated in the motion he filed today, “These abuses of power must not go unpunished. The free press must not go unprotected.”

That email was sent out shortly before 6pm last night. Two hours later, another one followed it:

Project Veritas’ latest release, exposing the U.S. Department of Justice’s outrageous disregard for journalist protections under the First Amendement, as well as orders made by a federal judge, has made a massive impact in the last few hours.

That email was sent out shortly before 6pm last night. Two hours later, another one followed it:

Project Veritas’ latest release, exposing the U.S. Department of Justice’s outrageous disregard for journalist protections under the First Amendement, as well as orders made by a federal judge, has made a massive impact in the last few hours.

The remainder of the email was the direct quotation of the ACLU’s reply to news of this story.

It included the following graphic: 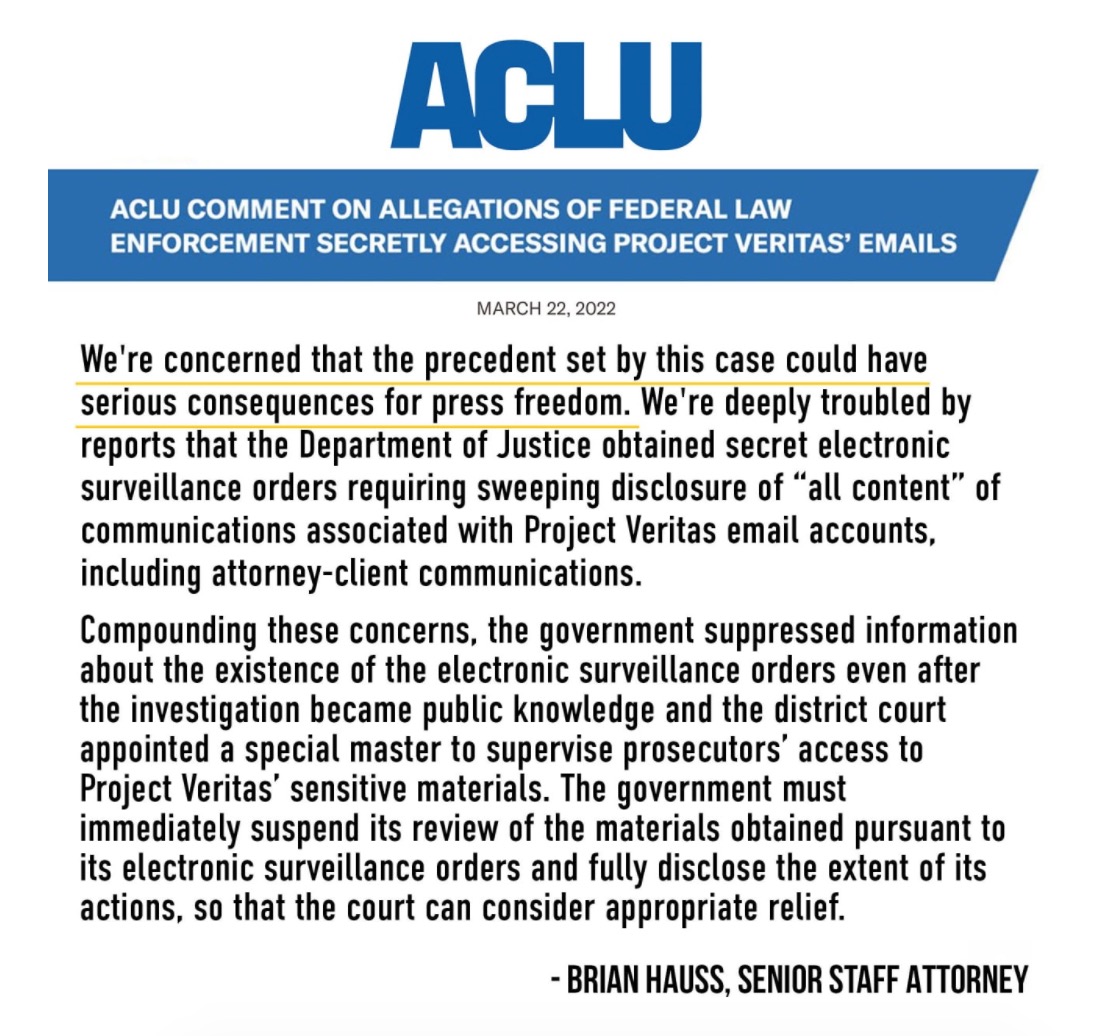 And it included text from the ACLU’s website, which we will cite in its entirety.

The following is a statement from Brian Hauss, senior staff attorney with the ACLU’s Speech, Privacy, and Technology Project, in response to allegations from Project Veritas that prosecutors misled a federal court and sought unwarranted gag orders during a federal investigation of the group’s ties to the alleged theft of a diary belonging to President Joe Biden’s daughter Ashley:

“We deplore Project Veritas’ deceptions, and we don’t have a full picture of the government’s investigation. But we’re concerned that the precedent set by this case could have serious consequences for press freedom. We’re deeply troubled by reports that the Department of Justice obtained secret electronic surveillance orders requiring sweeping disclosure of “all content” of communications associated with Project Veritas email accounts, including attorney-client communications.

“Compounding these concerns, the government suppressed information about the existence of the electronic surveillance orders even after the investigation became public knowledge and the district court appointed a special master to supervise prosecutors’ access to Project Veritas’ sensitive materials. The government must immediately suspend its review of the materials obtained pursuant to its electronic surveillance orders and fully disclose the extent of its actions, so that the court can consider appropriate relief.” —ACLU [Emphasis added]

Biden’s Dems claim to be the great defenders of Democracy. If that were true, why would they so casually trample the rights of American citizens… and not for the first time?