Fact-Checkers Attack Biden For Blowing Smoke In Our Eyes 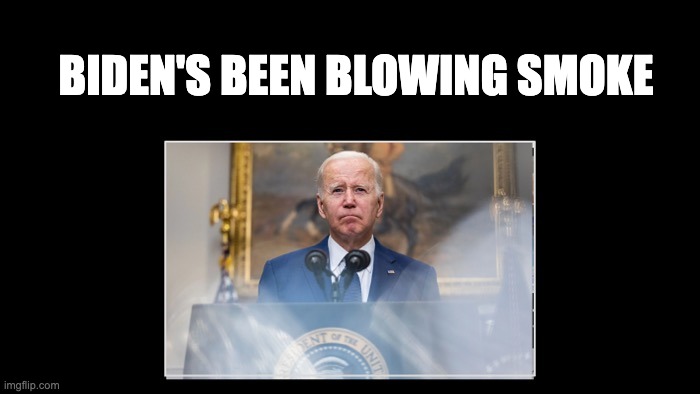 There are many lies Joe Biden emotes daily to distort our eyes away from the truth. His latest lie is that he has “reduced the federal deficit,” a claim that makes analysts and fact-checkers point out his distortions.

Biden delivered this smoke on Friday when the latest jobs report came out.

“Let me remind you again: I reduced the federal deficit,” Biden said Wednesday. “All the talk about the deficit from my Republican friends, I love it. I’ve reduced it to $350 billion in my first year in office. And we’re on track to reduce it, by the end of September, by another 1 trillion, 500 billion dollars — the largest drop ever.”

Regardless, Dan White, the Senior Director at Moody’s Analytics, slammed Biden for his lie.

Biden is gaslighting on the deficit. His actions have INCREASED deficit projections.

CNN’s fact-checker Daniel Dale also called BS on Biden’s claim that his policies helped reduce the federal deficit. He also reported that one expert told him that the Democrat’s assertion was “almost bizarro world” in its misrepresentation of the situation.

Biden’s figures for both the 2021 fiscal year (which ran through last September) and the ongoing 2022 fiscal year (which runs through the coming September) are accurate, though the $1.5 trillion figure for 2022 is a projection. But some experts on fiscal policy say Biden is distorting reality when he claims that he is personally responsible for the deficit going down.
The deficit has been smaller under the Biden administration than it was at the end of President Donald Trump’s tenure. But the deficit has been bigger under the Biden administration than the nonpartisan federal Congressional Budget Office had projected it would be if the Biden-era federal government stuck with the laws that were in effect when Trump left office in early 2021
(…)
A $360 billion decline is certainly substantial. The Congressional Budget Office, however, had estimated at the beginning of Biden’s tenure that the fiscal 2021 deficit would be a decline of more than $870 billion if the Biden administration did not implement new policy.

He added that “Marc Goldwein, senior vice president at the Committee for a Responsible Federal Budget, an organization that advocates deficit reduction, said in an interview that Biden’s claims about having personally reduced the deficit are “almost bizarro world,” a reversal of reality. The deficit would have fallen by much more “had President Biden come to office and not done anything,” he said.

I must disagree with Mr. Goldwein when he says that Biden hasn’t done anything. He has done plenty. Since he entered the Oval Office, he screwed up energy production, so we are no longer energy independent. He destroyed all of Trump’s border protection programs, so we have a record number of illegal aliens crossing the board. He’s screwed up the ways products and cut back wheat production. Food shortages are appearing throughout the country. His handling of the economy has created record inflation, Trump’s Abraham Accords were on a roll, and there were more countries soon to make peace with Israel. He ignored that because it was a Trump accomplishment. Biden’s most significant foreign policy accomplishment was his withdrawal from Afghanistan, leaving behind Americans and Afghanis who we promised to evacuate,

Those are only a few of Biden’s accomplishments.

You see, Mr. Goldwein, it’s not fair to say that Biden hasn’t done anything since becoming POTUS; he’s done plenty. Sadly everything he’s done has turned another successful part of America into Sh*t.
Some of this post was first seen at iPatriot.
Biden’s blowing smoke
Https://lidblog.com
Facebook Twitter Flipboard