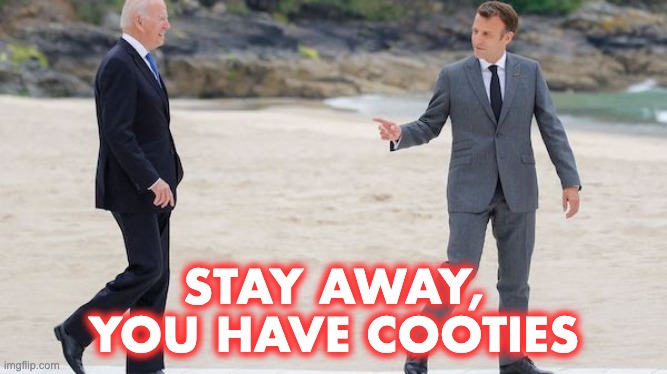 Biden was Embarrassed by Macron

Throughout history, America and France have seen their stories intertwined time and again as the world’s foremost democracies travel down a similar path of freedom on the world’s stage.

But there are disagreements, surely, and the French have long held a bit of a snide distrust for Americans, viewing us primarily as cowboys who react first and think later.   The same has been true in recent weeks, as US President Joe Biden’s strategy for dealing with Russia’s invasion of Ukraine appears to have irked French President Emmanuel Macron, who himself visited with Vladimir Putin just weeks ago.

After Macron has publicly criticized the US reaction, he’s also snubbed President Biden in a rather telling way.

Newly re-elected French President Emmanuel Macron did not take a phone call from President Biden on Sunday night, leaving Biden to converse with Macron’s staff and wait until the next day.

“I feel good about the French election,” Biden told a gaggle of reporters upon his return to Washington, D.C., after a weekend trip in Delaware. “I tried to talk to him last night. I spoke to his staff and he was at the Eiffel Tower having a good time. And I’m going to be talking to him today.”

This is far from the first time that Biden has been ignored.

Biden has struggled before in his attempts to get world leaders to get back to him. Saudi Crown Prince Mohammed bin Salman and Sheikh Mohammed bin Zayed al Nahyan of the United Arab Emirates both declined calls from Biden last month regarding oil exports, according to The Wall Street Journal.

Joe Biden’s approval ratings have been abysmal from the start of his first term, and many Democrats are concerned about letting the septuagenarian run again in 2024.

Cross-Posted with Flag and Cross.