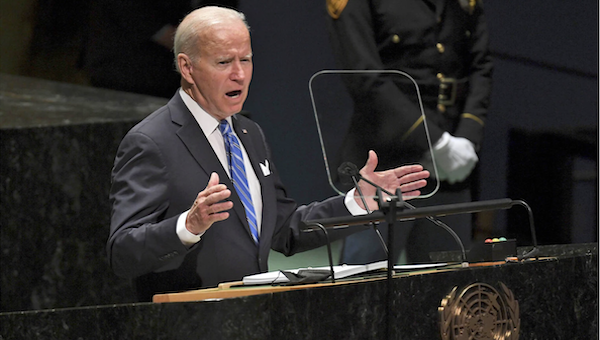 From the bungled Afghanistan withdrawal to COVID to the “Climate Crisis,” Biden tried to appear firm and resolute but came across as angry and defensive. Here’s the 411… Biden United Nations

President Biden addressed the United Nations General Assembly on Tuesday, and he alternated between yelling and slurring his words and sometimes slurring his yelling. He did settle down a bit when he was talking about the threat of terrorism.

He spoke for nearly 35 minutes, which may actually be the longest he’s spoken since taking office.

If you’re American, it was kind of embarrassing that this is the guy that is President in 2021. And that’s just the delivery. The content wasn’t much better if you’re on the conservative side of the political spectrum.

After watching Joe’s speech, it leaves someone with a few questions.

He laid out his priorities: COVID, climate, and global partnerships.

Here’s a quick rundown of the main points.

President Biden said, “Bombs and bullets cannot defend against COVID-19 or its future variants. To fight this pandemic, we need a collective act of science and political will. We need to act now to get shots in arms as fast as possible.”

Mr. Unity — who has been using the response to COVID as a wedge issue from before the 2020 Election — also said that pandemic has reminded us of the need to get beyond the petty divisions and “recognize our common humanity.”

“Our shared grief is a poignant reminder that our collective future will hinge on our ability to recognize our common humanity and to act together,” said Biden as his administration cuts access to monoclonal antibody treatment to red states.

Biden spoke about how the United States is helping developing nations by donating vaccines. He called it sending a “dose of hope.”

Of course, he had to include that creepy, globalist “Build Back Better” phrase… but we all know that’s just a conspiracy theory.

As he spoke about the “next” pandemic, Biden coughed into his hand. He’s never going to learn that “cough into the elbow” thing, is he?

Pres. Biden addresses UN General Assembly: “Will we work together to save lives, defeat COVID-19 everywhere and take the necessary steps to prepare ourselves for the next pandemic? For there will be another one.” https://t.co/JiFkfpatfr pic.twitter.com/gL0xlXvK27

But he’s a big “follow the science” guy, right?

Biden then launched into his next priority — the “existential threat of the Climate Crisis.” He cited the “extreme weather” that he claims is affecting everyone everywhere and the “investments” into “green” infrastructure.

Pres. Biden addresses UN General Assembly on climate change: "In April, I announced the United States ambitious new goal under the Paris Agreement to reduce greenhouse gas emissions from the United States by 50% to 52% below 2005 levels by 2030." https://t.co/VlT7z8v2lm pic.twitter.com/tiNnHat8yJ

Brace yourself for Solyndra 2.0 because you know that’s coming.

Interestingly, there was no mention of China’s carbon footprint despite being the biggest polluter in the world.

Biden, who pissed off our allies with the unilateral decision to withdraw from Afghanistan and then bungling it badly, and ticked off France so badly that they withdrew their Ambassador to the United States for the first time in history, spoke about the need to focus on global alliances. As he was speaking, the Democrats in the House were withdrawing the funds given to Israel for the purely defensive Iron Dome system.

He also touched on Afghanistan by defending the official end of the 20-year war but didn’t address the mess in how the U.S. and allies had to leave.

“We stand, in my view, at an inflection point in history. And I’m here today to share with you how the US plans to stand with partners and allies in answering this questions," President Biden says. pic.twitter.com/IPM4vnK66B

At around the 18:30 mark, Biden also said that the United States is looking for a way to bring back the atrocious Iran Deal.

He also said that the U.S. military shouldn’t be used frivolously. This is the same guy whose administration authorized a drone strike on an aid worker bringing home clean water for his family. The hellfire missile appears to have killed 10 people, including 7 children.

"U.S. military power must be our tool of last resort, not our first — and it should not be used as an answer to every problem we see around the world," Pres. Biden says in address at UN General Assembly. pic.twitter.com/39QirYSvWe

I hope Xi sees that, bro.

Biden insisted that he didn’t want to be in a Cold War with anyone.

President Joe Biden addressed the UN General Assembly on Tuesday, discussing a variety of different topics from the Covid-19 pandemic to America's global partnerships and the two-state solution. pic.twitter.com/znuxnFvPMU

Well, that’s awkward… it appears we are already there. One of the many things that Biden seems to not comprehend — our enemies also get a vote, and it’s pretty clear where China stands.

He spoke about corrupt governments that “take resources” away from the people to make the powerful rich. Interesting. So, how are the sales of Hunter’s paintings going, Joe?

"Democracy remains the best tool we have to unleash our full human potential," President Biden says, addressing UN leaders. "Now, we must again come together to affirm the inherent humanity that unites us is much greater than any outward divisions or disagreements." pic.twitter.com/6irlazIsU6

The authoritarian in the White House denounced authoritarianism while using the imagery of not allowing “people to breathe.”

You’d think that whoever wrote that speech would be aware that the Biden-Harris administration has imposed a mask mandate on federal spaces, inter-state travel and just issued vaccine mandates despite insisting that he wouldn’t do it. You’d think they’d know that this administration has decided to trample on states’ rights and sue states for wanting their citizens to be free from what Gov. Ron DeSantis has so aptly labeled a “bio-medical security state.”

Joe started to wind down at about the 20-minute mark.

He mentioned holding the “Tolly-bon” accountable for their commitment to upholding “universal human rights” in Afghanistan. (Good luck with that.)

And of course, he promised to toss a lot more money — as part of the rest of the G7 — at things like infrastructure, food, healthcare, etc., to countries in need.

That pretty much sums it up.

Here is the full video of Biden slurring his way through the speech (don’t watch on a full stomach).