The President of the U.S.is either lying or has lost the mental capacity to tell the truth, and the MSM is covering it up. 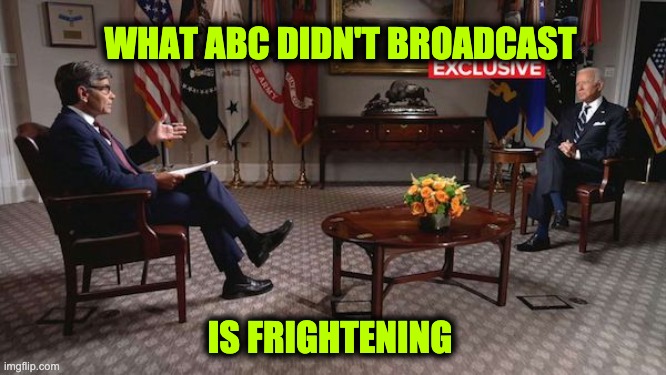 If anyone in the media is still wondering why the public doesn’t trust them, just look at what was carefully clipped out of Joe’s interview with George S. The single job of the press is to give their nation an informed citizen class so that they can make informed decisions about how well they are being represented. That is not what we see now, evidenced by what was left out of the Biden-Stephanopoulos interview broadcast.

With the situation in Afghanistan going to Hell in a handbasket as a direct result of command-and-control decisions made in DC at the specific direction of Joe Biden, it is only fair that the public should get to hear their President give an account of himself and of the decisions he and his administration have made. The buck does, after all, stop with him. He himself said so just before he blamed everyone else.

After the interview broadcast, the public — sick of being stonewalled while Afghanistan continues to deteriorate — clamored for the entire, unredacted footage of the video. We wanted to see not just what words he used but the full spectrum of reactions and ‘poker tells’ that might show up and indicate we were being lied to. We also wanted to see if the president was mentally capable of handling the crisis.

The best they’ve come up with (so far) is the written transcript. We still want the full footage, but it’s a start. Daily Caller wrote a piece in which they compared the video and the text to show what was left out, marking the text that never aired in bold print. The exclusions were remarkable. We can’t cover them all, but three, in particular, stood out for different reasons.

The three most damning omissions that stand out to us are his response to those who served in Afghanistan and are watching everything they fought and bled for fall apart, his foreign policy response, and what he had to say about Americans still in harm’s way.

STEPHANOPOULOS: I– I think a lot of– a lot of Americans, and a l– even a lot of veterans who served in Afghanistan agree with you on the big, strategic picture. They believe we had to get out. But I wonder how you respond to an Army Special Forces officer, Javier McKay (PH). He did seven tours. He was shot twice. He agrees with you. He says, “We have to cut our losses in Afghanistan.” But he adds, “I just wish we could’ve left with honor.”

BIDEN: Look, that’s like askin’ my deceased son Beau, who spent six months in Kosovo and a year in Iraq as a Navy captain and then major– I mean, as an Army major. And, you know, I’m sure h– he had regrets comin’ out of Afganista– I mean, out of Iraq.

He had regrets to what’s– how– how it’s going. But the idea– what’s the alternative? The alternative is why are we staying in Afghanistan? Why are we there? Don’t you think that the one– you know who’s most disappointed in us getting out? Russia and China. They’d love us to continue to have to–

This is an absolutely relevant question. Biden had no answer, and even the answer he did give involved hiding behind the service of his deceased son. He didn’t give a better answer because he didn’t have a better one.  It may have been a  dodge, or it may have been his mental decline.  The factual errors he made about his son’s own service only make it worse.

Two points — after all his cheap grandstanding about how Trump made life better for our enemies and worse for our friends and about how America is ‘back’ — he doesn’t seem to realize the effect a catastrophic loss of face the botched exit in Afghanistan will have for those whose interests are aligned against ours. Nor does he acknowledge how angry our NATO partners and other nations are about not being told about the exit plan and having to execute an emergency exit without a properly secured airbase to work from.

But there’s one more detail in this clip that is far, far worse than any of that. Can you spot it?

STEPHANOPOULOS: You talked about our adversaries, China and Russia. You already see China telling Taiwan, “See? You can’t count on the Americans.” (LAUGH)

BIDEN: Sh– why wouldn’t China say that? Look, George, the idea that w– there’s a fundamental difference between– between Taiwan, South Korea, NATO. We are in a situation where they are in– entities we’ve made agreements with based on not a civil war they’re having on that island or in South Korea, but on an agreement where they have a unity government that, in fact, is trying to keep bad guys from doin’ bad things to them.

We have made– kept every commitment. We made a sacred commitment to Article Five that if in fact anyone were to invade or take action against our NATO allies, we would respond. Same with Japan, same with South Korea, same with– Taiwan. It’s not even comparable to talk about that.

STEPHANOPOULOS: Yeah, but those–

BIDEN: It’s not comparable to t–

STEPHANOPOULOS: –who say, “Look, America cannot be trusted now, America does not keep its promises–“

BIDEN: Who– who’s gonna say that? Look, before I made this decision, I met with all our allies, our NATO allies in Europe. They agreed. We should be getting out.

STEPHANOPOULOS: Did they have a choice?

BIDEN: Sure, they had a choice. Look, the one thing I promise you in private, NATO allies are not quiet. You remember from your old days. They’re not gonna be quiet. And so– and by the way, you know, what we’re gonna be doing is we’re gonna be putting together a group of the G-7, the folks that we work with the most– to– I was on the phone with– with Angela Merkel today. I was on the phone with the British prime minister. I’m gonna be talking to Macron in France to make sure we have a coherent view of how we’re gonna deal from this point on.

Why did you say ‘a civil war they’re having on that island’, Joe? You clearly meant Taiwan. Do you not recognize it as an independent nation, like Trump does? Is that because you are firmly in Xi’s pocket and have been since Hunter’s emails referred to you as ‘the Big Guy’ that gets 10% of his giant China earnings?

He just doesn’t have a clue. The Taliban troops are now “nice guys?”

They are ‘cooperating,’ Joe? They are ‘letting American citizens get out,’ Joe?

This one was most likely cut because it’s such an outrageously blatant lie that even Democratic Party operative George Stephanopoulos couldn’t bring himself to air it.

BIDEN: Yes. Now, exactly what happened– is not priced in. But I knew that they’re gonna have an enormous, enorm– look, one of the things we didn’t know is what the Taliban would do in terms of trying to keep people from getting out, what they would do. What are they doing now? They’re cooperating, letting American citizens get out, American personnel get out, embassies get out, et cetera. But they’re having– we’re having some more difficulty in having those who helped us when we were in there–

STEPHANOPOULOS: And we don’t really know what’s happening outside of Kabul.

STEPHANOPOULOS: We don’t really know what’s happening outside of Kabul.

BIDEN: Well– we do know generically and in some specificity what’s happening outside of Kabul. We don’t know it in great detail. But we do know. And guess what? The Taliban knows if they take on American citizens or American military, we will strike them back like hell won’t have it.

The Taliban control the roads leading to the Airport. And tens of thousands of Americans are hanging in the balance — promised that their government will bring them home if they get there, but they are on their own when trying to get safe passage to the airport.

It is even more difficult for the interpreters, guides, and other Afghanis, who put their lives and those of their families in danger for helping the U.S. war effort. America promised to get them and their families out of the country if the Taliban took over. Right now it looks as if many of them are trapped for now.

In one of their news conferences (unlike the U.S., they are taking questions) the Taliban spokesman told the MSM that no revenge against those who helped Nato forces or the previous government. It sounds nice but isn’t true.

According to the BBC:

The Taliban have stepped up their search for people who worked for Nato forces or the previous Afghan government, a report has warned.

It said the militants have been going door-to-door to find targets and threaten their family members.

The hardline Islamist group has tried to reassure Afghans since seizing power in a lightning offensive, promising there would be “no revenge”.But there are growing fears of a gap between what they say and what they do.

The warning the group were targeting “collaborators” came in a confidential document by the RHIPTO Norwegian Center for Global Analyses, which provides intelligence to the UN.

“There are a high number of individuals that are currently being targeted by the Taliban and the threat is crystal clear,” Christian Nellemann, who heads the group behind the report, told the BBC.

“It is in writing that, unless they give themselves in, the Taliban will arrest and prosecute, interrogate and punish family members on behalf of those individuals.”

He warned that anyone on the Taliban’s blacklist was in severe danger, and that there could be mass executions.

The Taliban is a terrorist group. They are expected to lie. Based on what was left out of the Biden-Stephanopoulos interview, the President of the U.S.is either lying or has lost the mental capacity to tell the truth.  And the MSM is covering for Dementia Joe or Lyin Joe Biden.