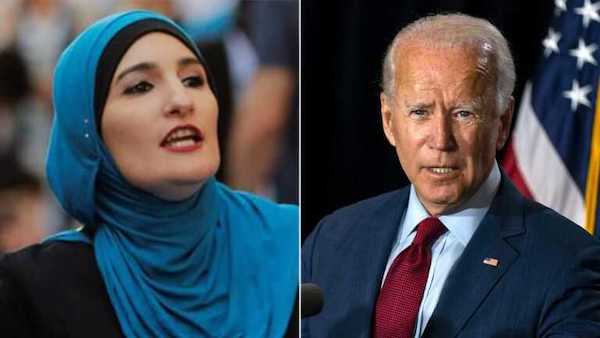 Following her words to a meeting of Muslims at the Democratic Convention, team Biden publically disavowed any connection to anti-Semitic activist Linda Sarsour. Now the campaign has apologized “off the record” to the radical left-wing anti-Semitic activist after publicly condemning her extreme anti-Israel and anti-Semitic views last week. Biden Sarsour

Sarsour is a supporter of the anti-Semitic Boycott, Divestment, and Sanctions (BDS) movement, she banned pro-Israel Jewish women from the Trump-hating Women’s Marches, believes the media is controlled by Jews and believes that Zionist women cannot be feminists. She is a defender of the racist and antisemitic Louis Farrakhan.

After the Jew-hating Sarsour spoke at the DNC the campaign contacted Jake Tapper  with this message, “Joe Biden has been a strong supporter of Israel and a vehement opponent of antisemitism his entire life, and he obviously condemns her views and opposes BDS, as does the Democratic platform, ”

The weekend after the DNC came the report from Middle East Eye that the Biden campaign secretly apologized.:

Top aides to presidential candidate Joe Biden have apologised to Arab and Muslim Democrats over an attack on Palestinian-American activist Linda Sarsour by the campaign, in an effort to quell anger over the controversy.

In a private call with dozens of prominent activists on Sunday, Ashley Allison, national coalitions director for the Biden campaign, said she was “sorry” for the comments that a campaign spokesman made against Sarsour.

Allison said she empathised with “the pain” that the campaign had caused to Arabs and Muslims by disavowing Sarsour.

“I am sorry that that happened. And I hope that whatever trust was broken, that this conversation is one small step to help build back the trust, but that is not the last time we have this conversation,” Allison told the activists.

Sunday’s call was off-the-record, but Middle East Eye obtained a recording of it.

Biden campaign’s comment, “Joe Biden has been a strong supporter of Israel and a vehement opponent of Antisemitism” is not true. His record on Israel is inconsistent at best. Biden is not an anti-Semite, but he not “a vehement opponent of antisemitism” either.  Starting with the fact that he worked for and praises Barack Obama, one of the most anti-Semitic presidents in history, without saying a word.

Along with Sarsour, And Obama, Biden’s convention featured others who have praised, promoted, defended, or appeared with one of the worst anti-semites in America, Louis Farrakhan. The Farrakhan fans included Lonnie Rashid Lynn Jr., AKA the rapper “Common” Freddy Haynes, Tamika Mallory, Rep. James Clyburn, and Sen. Cory Booker.

So which one is real? Is Biden’s support of Israel and promise to fight antisemitism real? Or does his groveling to the anti-Semitic, anti-Israel, left preview his real feelings?  Based on his track record Biden’s feelings about Israel and Jews will change as the wind blows, and the wind in the Democratic Party is blowing against Jews and Israel.