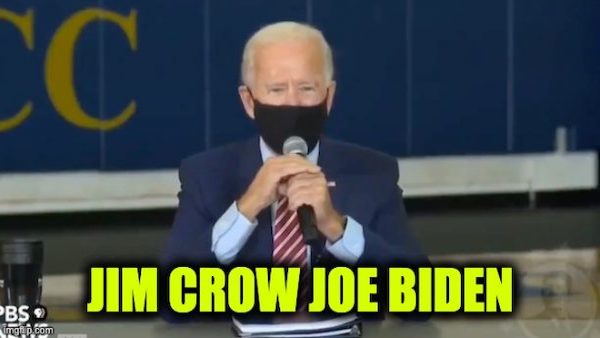 Last time around, we mocked Hillary for the ‘hot sauce’ in her purse and the cringe-worthy pronunciation in her outrageous fake black accent that ‘I don’t feel no ways tired’?

This time around, Mr. Plagiarist has decided to follow that same pandering play.

Joe is reciting those very same lines because he seems to think it will score him points and possibly whitewash his decades-long history as a racist. African Americans are a key demographic whose support the Biden campaign has seen eroding.

Here’s Joe delivering those same lines as Hillary. It has been set to music by someone who’s obviously enjoying the trolling. If you pay attention, you will hear the Trump team’s horns honking in the background.

The only thing Biden hasn’t plagiarized and stolen from another is his Dementia & his failure of a son. Those are all his to claim.

He’s stolen his speeches, his campaign slogan and even his wife from another. #VOTE Red #Elections2020#Trump 2020

Since Democrats keep coming back to these lines, again and again, you’d think they know what they are about, right?

If they knew what these lines were really about, most modern Democrats wouldn’t touch them with a 10′ pole.

It isn’t about politics or civil rights. Here’s a portion of the song from which they were taken, the story of an old woman the Rev. James Cleveland once saw walking down a difficult road. The context and the full lyrics can be found at BlackChristianNews.

Oh, but I don’t believe He brought me
this far Can I get a witness here tonight?

I don’t know ’bout you tonight
But I’ve been running for Jesus a long time
And there’s something about walking with him,
Hallelujah Everyday gets sweeter Than the day before
And for some reason I don’t mind the pitfalls,

Cause every time I get to one,
He’s right there
And I can say just like that old mother says that night
I don’t feel no ways tired, Lord
I’ve come too far from where I started from
Nobody told me that the road would be easy.

Well I don’t believe He’d bring me this far,
and just leave me
I’m gon’ say it one more time
I don’t feel no ways tired, Lord

Will the party that booed God, objected to the Christian faith of some Trump appointees, supports unlimited abortion, took nuns to the Supreme Court over forcing them to pay for birth control, and tried to overturn the court-granted refugee status of Religious refugees REALLY suggest that they encourage ‘just a closer walk with Thee’?

Here’s the song they keep quoting from, as performed by Reverend James Cleveland himself and (of course) a gospel choir.

Maybe it will take a mass defection of minorities from the Democrat party for Dems to wise up and realize that treating people as individuals is much better than pandering to some theoretical monolithic group.

The best ‘interest group’ is the individual.

Which is why Patriots vote for freedom any day of the week.