Major Should Be Known As The Biter-In-Chief 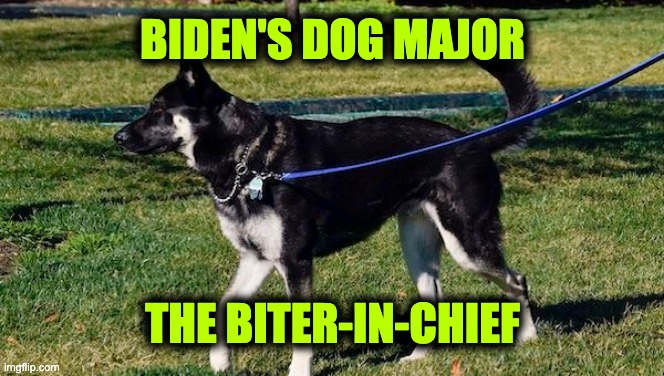 Apparently, the mainstream media hasn’t just been covering for President Biden but may also be covering for his dog Major who should be known as the Biter-In-Chief. It is also possible that the WH of Lyin Joe Biden lied to the press. Biden’s dog Major

Attached are a couple of photos from the dog bites SA [redacted] has received the [sic] in the last week from the First Family’s pet (Major).

On 3.1.21, SA [redacted] was bit by Major on [redacted] at the Lake House in Wilmington, DE. That bite caused some bruising as seen in the picture dated 3.1.21.

On 3.8.21, SA [redacted] was bit by Major on [redacted] at the White House. That bite caused bruising and puncture to the skin as seen in the picture dated 3.8.21.

At the current rate an Agent or Officer has been bitten every day this week (3/1-3/8) causing damage to attire or bruising/punctures to the skin.

An assistant special agent in charge forwards the message and images to Secret Service official David Cho, reporting, “Sirs, We had another dog bite incident this morning. This was the 2nd time SA [redacted] was bitten.”

On March 1, 2021, a Protective Division agent notes, “This weekend in Wilmington, there were 3 minor incidents where Major nipped/ brushed up and nudged Shift SAs. Panicking or running with only embolden animals so stand your ground and protect your hands/fingers by placing them in your pockets or behind your back.”

Ah…the dog days of spring. There were more incidents than the ones above, and in total, the Major situation was  much more serious than what the White House revealed in March,

“Obviously that’s not the world’s most important story, but it is significant because we expect honest information even for minor stories,” the reporter added. “So can you explain to us why there was a kind of misleading account presented to us?

“As we’ve stated previously, Major has had some challenges adjusting to life in the White House. He has been receiving additional training as well as spending some time in Delaware where the environment is more familiar to him and he is more comfortable. I don’t have any additional specifics but I think that speaks to where Major is located, to be fully transparent in your ongoing interest in the dog,”

Animal behavior experts have suggested that the dog may be reacting to the chaos of its environment, with some interpreting that to mean something is amiss in the Biden White House (besides #Dementia Joe’s policies and his abandonment of Americans in Afghanistan).