Afghanistan Evacuation: NOW Do We Have A Crisis In Confidence? 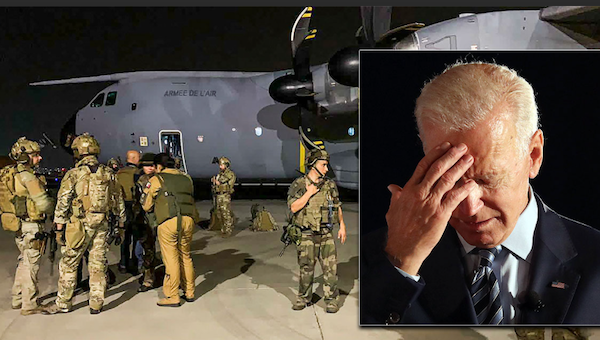 The Afghanistan evacuation has created a crisis of sorts, and it’s entirely self-inflicted. The fallout will be widespread and dangerous. Biden’s Botched Bugout has severely damaged our relationship with allies who count on the United States to have their back militarily. Taiwan being one, Europe is another. Russia, Iran, and China are laughing at us. North Korea restarted its nuclear program. A summit in the Middle East that included Saudi Arabia, Iran, France, and others, didn’t bother to invite the U.S. or Israel. It’s a crisis in confidence with our leadership and will seriously affect our National Security. Biden crisis in confidence

Fudging The Numbers In The Afghanistan Evacuation

No one has any quarrel with pulling out of Afghanistan. But they do have serious problems with the cut-and-run approach of the Biden administration. Then there are the lies, lack of taking responsibility, blaming Trump (the usual), and myriads of pretending they helped when they had no part of…oh, and leaving American citizens behind. That’s the corker. Psaki claimed there were around 100 Americans left in Afghanistan. But Congressman Darrell Issa (R-CA) told the AP that there are around 500+ Americans left.

When including the family members of U.S. citizens, Issa said the number of people stranded in Afghanistan could be as high as 1,000.

Rep. Don Bacon (R-Neb.) stated to the news agency that the Biden administration needs to provide the full number of those left behind in the South Asian nation.

“The problem is, it doesn’t include families,” he said. “They’re lowballing the numbers.”…

Other than Issa, some veteran-led rescue groups told AP that the estimate that no more than 200 Americans were left behind is too low.

Mike Jason, who runs a rescue operation known as Allied Airlift 21, told the news outlet that he believes the figure is far higher, saying it’s also misleading because it doesn’t include family members of Americans trapped there. Alex Plitsas, an Iraq War veteran who’s part of a rescue network known as Digital Dunkirk, said that in one day, he received calls from six Americans stuck in the country earlier this week and that none registered with the U.S. Embassy.

The Afghanistan Evacuation: The State Dept Was Part Of The Problem, Not The Solution

Then there’s the problem of the State Department trying to steal credit from the organizers who were able to evacuate 4 Americans over land to safety in another country.

The final time Mariam tried to enter the airport, a Taliban fighter pointed a pistol at her head and warned her not to come back. Shortly after that, Taliban fighters asked Kabul locals who knew Mariam how they could find her. Mills’ team rushed to get her and the children out of the city and into a safe house.

Plan B was to get Mariam and her family aboard a private charter flight from Mazar-i-Sharif airport, but the planes were never cleared to take off. Some private evacuation organizers have blamed the State Department for failing to gain clearance for private charter flights to land in third countries, while Republican Texas Rep. Michael McCaul has blamed the Taliban for the planes remaining grounded…

The State Department’s public posture about Mariam’s rescue is “absolute nonsense,” Mills told Fox News in an exclusive interview Monday. “The fact that they’re spinning this, trying to take 100% credit when they didn’t track this family, when they placated this family, when the mother, who was under extreme stress and extreme pressure, reached out to the State Department multiple times and got no help.”…

After 2 weeks & multiple life threatening attempts, I am overjoyed to share that 4 U.S. citizens from #TX13 were part of the first successful ground evacuation since the U.S. left Kabul. Thank you to Cory Mills & the other patriots on his team for saving these BRAVE Americans! pic.twitter.com/1Tv9KRUgcE

This is a flat out lie. The Biden Administration abandoned them. Let’s be clear, it was our team of patriots who worked around the clock for two weeks to get them out, despite the many roadblocks from the State Department. https://t.co/75lA8jOLHO

And there’s the other kicker- the State Department and Taliban BOTH have been reportedly blocking flights from the airport. The Taliban claims it’s because they don’t have proper documents, but witnesses have stated it’s more of a hostage situation. This Afghanistan evacuation has gone badly from the beginning.

As reported here on The Lid:

“We understand the concern that many people are feeling as they try to facilitate further charter and other passage out of Afghanistan. However, we do not have personnel on the ground, we do not have air assets in the country, we do not control the airspace — whether over Afghanistan or elsewhere in the region,” a State Department spokesperson told CNN.

“Given these constraints, we also do not have a reliable means to confirm the basic details of charter flights, including who may be organizing them, the number of U.S. citizens and other priority groups on-board, the accuracy of the rest of the manifest, and where they plan to land, among many other issues,” the spokesperson said.

Ya think?  Is it that the spokesperson is too stupid to understand that Secretary of State Winkin and Blinken, and Nod helped make that decision along with a feeble-minded President, NSA Jake (not Ed) Sullivan, who lied to America about the recent Israel conflict with the terrorist Hamas,, and a Pentagon leadership more concerned about white rage than protecting our country and our troops.

And that’s only one aspect of the fallout from the Afghanistan evacuation. Militarily, it was totally stupid. General Milley may think it’s all hunky-dory, but the fact is that it was a total fiasco that got a lot of people killed, not just our 13 military service members. Our so-called leadership said they didn’t see this coming, yet back in July, they were told by Ashraf Ghani himself that the Taliban were coming swiftly- possibly with the aid of Pakistan. Biden begged him to change the narrative and pretend they were okay in a phone call leaked to the news media.

The transcript of this call on July 23 appears to show very clearly that the administration knew things were going badly and that there was very little time to turn things around. Rather than the intelligence community accepting the blame being assigned to it, this leak calls out the honesty of the president himself. The transcript also shows that the Joint Chiefs were willing to participate in promoting this illusion that the Taliban were not taking over Afghanistan. That should not have set well with the intelligence community. It also had to sign on to the false pledge made by President Biden not to leave any Americans behind.

Not only is the so-called Commander-in-chief a dementia-ridden dunderhead, but the leadership surrounding him (i.e., Milley and Austin) also didn’t bother to try and stop him from executing the most damaging actions since the Vietnam war. LtCol Stuart Scheller is right – nobody took responsibility to stand up and say it was a screw-up. They punish the rank and file for complaining about military leadership or the so-called ‘president,’ but the fact is that this fiasco was totally avoidable. Add to all of this that not all of the Afghans who “evacuated” were the good guys, and you have a massive problem that now the US military and US law enforcement will have to try to solve.

All these things taken together point to an emerging crisis of confidence in the leadership, honesty, and integrity of President Biden by members of the military and intelligence community. The effects of such a crisis just seven months into his term can have dire effects on national security.