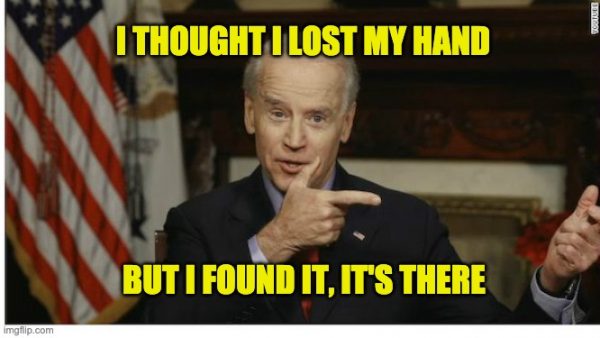 A new Rasmussen survey reveals only 54 percent of likely Democratic voters “are satisfied with (Joe) Biden as the Democrats’ 2020 nominee,” while 28 percent think the party should find someone else.

This revelation comes as news outlets are reporting that April saw continued record gun sales, credited mainly to the COVID-19 pandemic panic. There is no small irony in the fact that Biden is running with a robust anti-gun agenda.

According to Rasmussen, 92 percent of Democrats think it is likely Biden will be the party’s nominee, with 77 percent saying it is “very likely.”

Among all voters, 36 percent think Democrats need to find someone else, but 45 percent disagree, and 19 percent are undecided. Biden has been the focus of allegations of sexual misconduct several years ago while serving in the Senate. He has flatly denied the claim that he assaulted former staffer Tara Reade

But also in focus is the apparent division within Biden’s party. Many of those who savaged now-Supreme Court Justice Brett Kavanaugh during his confirmation hearings after allegations of sexual misconduct were brought by Christine Blasey Ford have been sticking by the former vice president.

According to Fox Business, “Gun sales in April spiked by more than 70 percent from the previous year, with the purchase of more than 1.7 million firearms as concerns related to the novel coronavirus continued, recently released statistics show.”

“March saw an even higher surge in sales,” the report added, “with 2,583,238 firearms sold – or 85.3 percent more than the previous year, according to data released late Monday by Small Arms Analytics and Forecasting.”

WGME News reported, “more than 12 million background checks have been conducted since the beginning of this year.”

Anecdotal information about gun buyers during the pandemic has strongly suggested many of them have bought firearms for the first time. In some cases, the first-timers were reportedly stunned at the process involved in legally purchasing firearms. They apparently discovered that it firearms are not “easily acquired.” They couldn’t just put cash down on a counter and walk out the door with a gun.

Many argue this is the type of gun control Biden advocates.

The COVID-19 response has substantially derailed what would typically be a very active campaign season, with candidates traveling from rally to rally to energize voters. This year, Biden has been trying to work with online video messages and interviews taped from Hunter’s house. In contrast, Donald Trump has been busy dealing with the crisis, the economic shutdown, and trying to get the nation back to work.