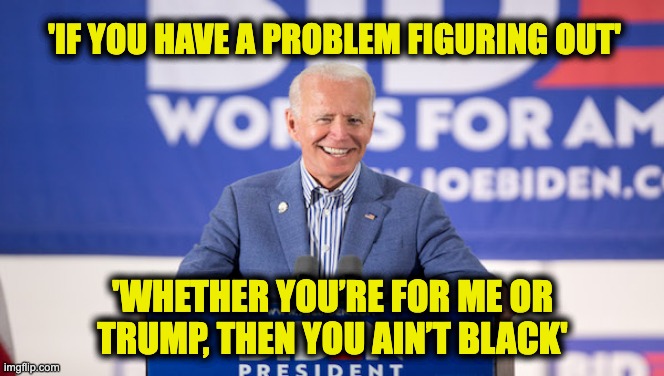 On Friday, President Biden added to his long career of racism as he delivered remarks at South Carolina State University’s 2021 Fall Commencement Ceremony, one of America’s Historically Black College and Universities (HBCU). He said that black entrepreneurs generally don’t have lawyers and accountants. Biden adds to racist history

Biden has used this [X group] is “just as capable as” their white counterparts on more than one occasion. While shoving people into identity boxes and then assigning them some group characteristic that is a predictor of success or failure is a particularly vile and racist practice in itself, here’s Joe accidentally saying the thing that he really means — that “poor” kids really means “minority” kids.

Joe Biden is a prime example of what former President George W. Bush’s speechwriter, Michael Gerson, called the “soft bigotry of low expectations.  Let’s be clear about one thing  Gerson is wrong in that low expectations is “soft” bigotry.  It’s just bigotry. This sort of thing posits that black people (or other minorities) are incapable of accomplishing things on their own without government assistance and guidance, whereas white people can find a way to figure it out. And Joe Biden has made a career out of making racist comments and supporting racists. Perhaps Biden should be forced to take CRT classes.

Here are some examples of Lyin Joe Biden’s racism:

Joe Biden told a 1973 crowd at the City Club of Cleveland that the political system in America benefited black people in the South.’ HUH?

In 2006 the future President said, “You cannot go to a 7–Eleven or a Dunkin’ Donuts unless you have a slight Indian accent” Another Racist comment.

Biden once bragged about getting an award from Segregationist Governor George Wallace.

Kamala Harris alluded to this during a Democratic primary debate when fighting busing in 1977, Biden claimed

Racial jungle? If a Republican said that, they would be branded a racist forever.

When he was in the Senate, Biden praised a pro-Confederacy group that supported white supremacists and the KKK and who prominently displayed the Confederate flag as “fine people.”

Remember what he said about Barak Obama in 2008? “I mean, you got the first mainstream African-American who is articulate and bright and clean and a nice-looking guy.”

Biden told supporters at a 2019 campaign stop in Iowa, “poor kids are just as bright and talented as white kids.” After some applause, he quickly corrected himself by adding: “Wealthy kids, black kids, Asian kids.”

Also, during the presidential campaign, Biden was interviewed on The Breakfast Club radio show by host ‘Charlamagne Tha God.’ and decided he had the right to determine someone’s race—because all African Americans must vote the same way. His exact words were

“ “You got more questions? Well I’ll tell you, if you have a problem figuring out whether you’re for me or Trump, then you ain’t black,”

A shocked Sen. Tim Scott, who per Biden is no longer black, told Stewart Varney the next day that presumptive Democratic presidential nominee  made the “most condescending and arrogant comments toward the black community he has ever heard.”

This condescending view of minorities is deeply held by the current President. He’s said it throughout his career.

Biden centered his Presidential campaign on the “Charlottesville Hate Hoax” and insisted that Donald Trump constantly sent out racist “dog whistles.” At the same time, he continued to have racist “gaffes” on the campaign trail.  He said that the 2020 election was a “battle for the soul of the nation” and implied it was a fight between racists and people who stood against racism. It appears that he was right — he just inverted which group was which, and which candidate is the one constantly saying racist things.

Despite Biden’s racist remarks, neither the mainstream media nor Democrats acknowledge the racial hatred of Joe Biden.  Instead, they take non-racial comments by conservatives and spin them. The spin enables them to describe those statements as racist.  When was the last time you saw the supposed fair MSM call out the liberals for their lies about racism? It hasn’t happened in my lifetime.