HUH? Biden Says 10 to 15% of Americans Are Not Very Good People 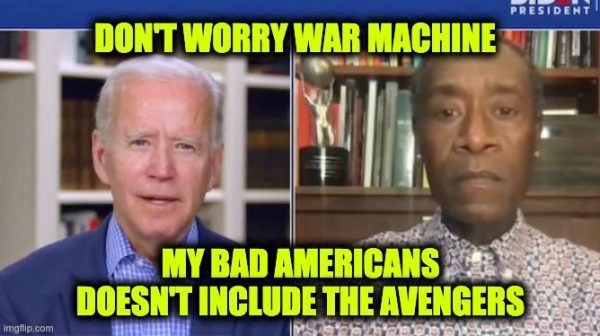 The words a president says matter, so when a president stands up and divides people all the time, you’re going to get the worst of us to come out.”

“Do we really think this is as good as we can be as a nation? I don’t think the vast majority of people think that. There are probably anywhere from 10 to 15 percent of the people out there that are just not very good people, but that’s not who we are. The vast majority of the people are decent, and we have to appeal to that and we have to unite people — bring them together. Bring them together.

During a virtual town hall about uniting the country, the former, the former SCHMOTUS, schmo of the United States, Joe Biden claimed that 10-15% of Americans are not very good people.  Yikes! There are approximately 330 million people in the U.S., which means dementia Joe believes that between 33 and 49.5 million of those Americans are not very good people.

The town hall was hosted by Don Cheadle, the actor who played War Machine in the Avengers movies.

WHICH 10-15% Joe?  Is that a larger or smaller group than Hillary Clinton’s basket of deplorables? I know it’s larger than the group of Black people who vote for Trump that Biden claims are not really black.’

Actually, Biden’s statement is typical of liberal big-government philosophy, which assumes that humans are basically evil, and a bigger government is needed to force them to be good.  Assumingly Joe believes the 49.5 million evil folks are the ones who disagree with his big-government agenda. But he didn’t say they will fit in a basket, like Hillary’s deplorables.

Joe Biden says that about "10 to 15 Percent" of Americans are "not very good people." pic.twitter.com/xwd1W6tLrr

Biden also said, “we had made enormous progress when we elected an African American president, I thought things had really changed.”

He is right, things really changed, not because Barack Obama was an African American, but because he was incompetent. The economy went into the sewer as businesses were over-regulated, the divide between rich and poor Americans grew wider, the cost of health insurance skyrocketed, America went from the leader of the free world to leading from behind, etc., etc., and so on.

That’s the part that Joe Biden doesn’t talk about. If America elects a liberal president, no matter the race, we will have real change—back into the abyss that we climbed out of since Trump took office.