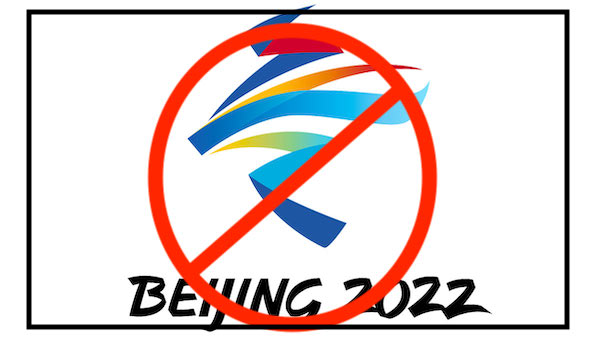 As China plans to enjoy a fortnight of propaganda beginning four weeks from today, the so-called international community has officially failed.

I called for a boycott 10 months ago, as did Rep. Michael Waltz, former U.N. Ambassador Nikki Haley, former Secretary of State Mike Pompeo, Enes Kanter, and others.

As I wrote last year:

“Boycotting these Olympics is mainly about denying China another global propaganda opportunity. It is also about changing the behavior of the wealthy IOC members who spit on the idea of human rights as China pampers them. The U.S. government should be the main moral counterbalance to modern totalitarians. Be it Nazi Germany, the Soviet Union, or today, the free world should not lend legitimacy to genocidal regimes; doing so encourages the IOC and others to continue awarding marquee events and publicity wins to the worst regimes on earth.”

Beijing’s worldwide abuses of human rights, military aggression, and, of course, unleashing the COVID-19 pandemic have inexplicably been allowed to go unpunished. Instead, China is granted the 2022 Olympic Games with the blessing of the International Olympic Committee and Western democracies.

Sure, there are “diplomatic” boycotts, but those are symbolic gestures meant more to appease Beijing than change its sordid behavior.

With genocide in China; invasions & occupations of Ukraine & Afghanistan; brutal repression in Belarus & now Kazakhstan, we need to decide once & for all that dictators must never host Olympic Games.#BoycottBeijingOlympics #BoycottBeijing2022 #NoGenocideGames #NeverAgain https://t.co/TOOMkflGF8

China has done all of this in fewer than three years, largely due to the international community’s fecklessness. They have been repaid by corporate cowards like NBC, Coca-cola, Google, the NBA, and Nike, which simply look the other way at human rights atrocities. Meanwhile, Hollywood continues to sponsor productions in China, and companies continue to expand their customer bases into the communist nation.

If the world refuses to intervene on China’s abuses and instead praises their Olympic efforts, potential viewers should take a simple stand and not watch a moment of this fiasco. Even the Olympic merchandise was possibly made with slave labor.

And our athletes, who do not mind heading over to the surveilled country for an extended stay, good luck and stay safe.

A.J. Kaufman is a columnist for Israel National News, P.J. Media, and here at The Lid