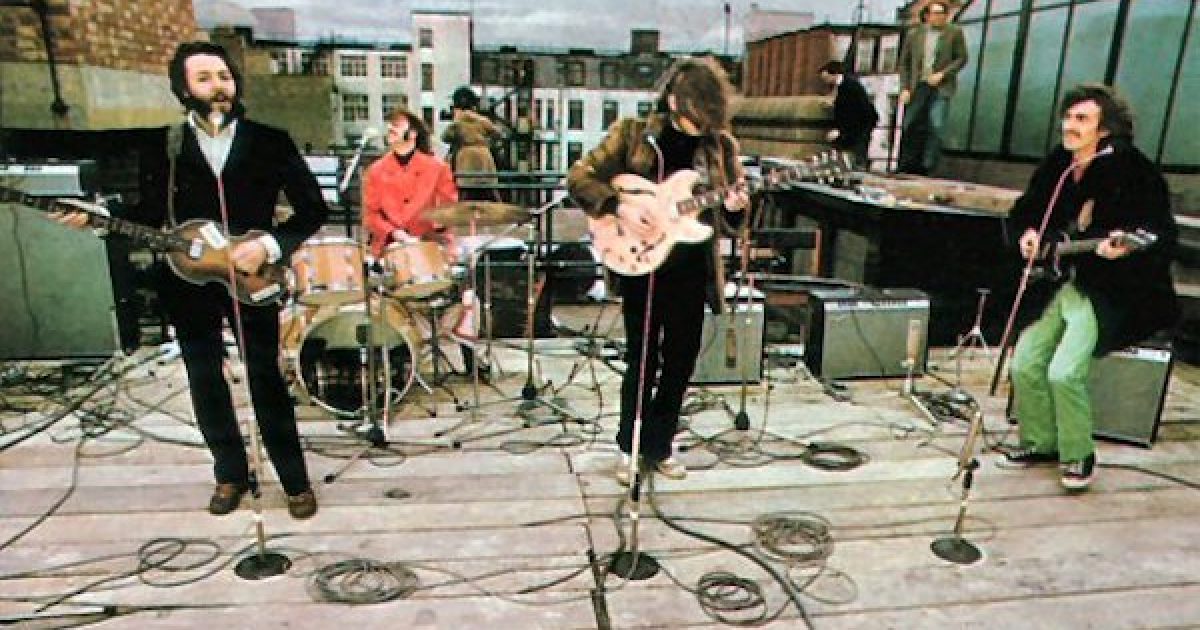 I’d like to say thank you on behalf of the group and ourselves and I hope we’ve passed the audition.

50 years ago, on January 30th, 1969, John Lennon, Paul McCartney, George Harrison, and Ringo Starr went to the roof of their record company, Apple Corp at 3 Savile Row in central London, for an impromptu lunchtime concert, giving the lucky throng on the street below an incredible gift. It was their first live performance in almost three years, it was also the last time The Beatles played in public.

The 42-minute long rooftop concert was eventually broken up by police over noise complaints, was intended to be a TV special called “Get Back,” documenting the group recording an album. Instead, the footage was used as part of a Beatles’ documentary movie “Let It Be,” which won an Oscar, appropriately for the best original score.

The video shows four men who seemed to really enjoy playing together. However, beginning with the death of manager Brian Epstein in  August 1967 tension between members of the group began to drive them apart.  Nine months after the rooftop concert, on September 20th, 1969, John Lennon told the band he wanted a divorce. They decided to wait till after the release of their final album “Let It Be” to announce the breakup.

The Beatles was the group that started the “British invasion.” They broke every rock and roll rule that was in existence and continued to innovate until they broke up.

I would never contend to be an expert on the Beatles just a fan of the “fab four.” Never saw them live, just listened to them over and over (and still do).

For those of you have never seen the group, or for those who remember the Beatles with the same reverence as me, permit me to present the video below, which shows a big part of the rooftop concert, the last time the Beatles played a live concert together.

And yes John Lennon, the group passed the audition.

BTW a bit of Beatles trivia, in this concert (see picture above or video below), John Lennon was in the middle, and George Harrison on stage left.  Normally Harrison was in the middle. If anybody knows the reason for this change, please let me know.

The Beatles Rooftop Concert from Christian Arceo on Vimeo.