The Lid On The Schaftlein Report, BEAR Market Bludgeons Stocks 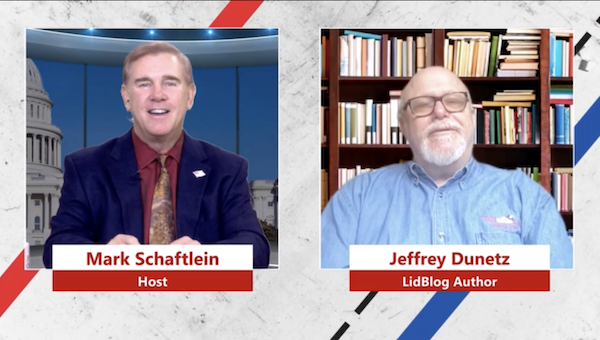 On Thurs, 8/16, Jeff Dunetz, The Lid, did his usual Thursday guest gig on Mark Schaftlein on the Schaftlein Report. For those who don’t know, The Lid has the great honor of being Marks’s guest every Thursday,

We began by discussing the awful economy and transitioned into the latest political news.

Below is a list of the specific issues discussed followed by a video of the program:

]1) Federal Reserve raises rates 75 basis points, the highest hike in 28 years-Stocks getting pounded in a Bear market
2) Biden’s approval at 39% and Disapproval at 56% in Reuters/Ipsos Poll-This is consistent with other polling data
3) By 51-31%, Voters prefer Republicans over Democrats in handling Inflation
*Biden, Schumer, and Pelosi meet to discuss inflation – OH NO, they will make it worse
4) Biden begs oil companies to produce more – Way to go, Joe – Your policies caused the problem, and John Kerry – Absolutely no drilling more oil and gas
5) In a sign of slowing, housing starts hit a 13-month low
6) Taiwan warns China that it has a missile capable of hitting Beijing. Should China worry?
7) Radical liberal PAC claims Representative Lauren Boebert (R) is an escort
8) Representative-elect Mayra Flores (R) says Democrats have walked away from Hispanics and no longer share their values, and They have gone so far left
9) 222K apprehended at the border – A record – Yet no media attention to this
10) Why did French President Macron, Germany’s Scholz, and Italy’s Draghi meet Zelenskyy in Kyiv?
11) In The Texas governor’s race – Abbott (R) leads O’Rourke by 5 in a poll. Will O’Rourke film another going to the dentist campaign video?

Enjoy the video of the 6/16 episode above, and don’t miss any episode of the Shaftlein Report every Mon-Thurs.