She Doesn't Get It, But Paul Harvey Does 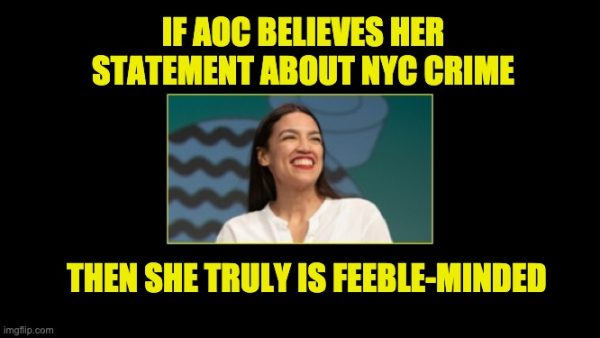 AOC violent crime
Is there a bread shortage in NYC? Perhaps people are committing armed robbery to get a loaf of bread. On Saturday, the New York Post reported 15 shootings in 15 hours, and the city saw a bloody July 4 weekend with 44 shootings and at least eight killed. And perhaps most tragically on Sunday, a 1-year-old boy was shot in the stomach and died during a cookout at a Brooklyn park.

Rep. Alexandria Ocasio-Cortez (D-NY) said during a virtual town hall that the crime surge in NYC because people are struggling to feed their children to get some bread, among other falsehoods.  Does she believe that the 1-year-old child was hoarding bread?

AOC was asked about the uptick in violent crimes overtaking the city, above and beyond the July examples above, NYPD officials revealed that gun violence more than doubled June, from 89 shootings last year to 205 this year. That’s plus 130%!

Ocasio-Cortez told the town hall viewers the reason for the violent crime uptick –well, she came up with an idea. The NYC Congresswoman either purposely made up a fake rationale for the increase and knows she is lying, or she really believes what she said which means she is an idiot.

The AOC violent crime response was:

“Maybe this has to do with the fact that people aren’t paying their rent and are scared to pay their rent and so they go out, and they need to feed their child and they don’t have money…so they feel like they either need to shoplift some bread or go hungry.”

Watch her full answer in this video:

AOC on increased NYC crime: "Maybe this has to do with the fact that people aren't paying their rent & are scared to pay their rent & so they go out & they need to feed their child & they don't have money so… they feel like they either need to shoplift some bread or go hungry." pic.twitter.com/oHSTWWJZ6a

Gee, I haven’t seen any news reports about an armed robbery in a supermarket where the violent offender grabs a few loaves of bread and leaves. If you have, please post the link to the news story in the comments section below.

But some of what she said in the video above can be proven to be false. AOC said the violent crime increase had nothing to do with bail reform. That’s a lie, according to the NYPD statistics.

All of the recidivism statistics are based on arrests for ‘new’ offenses that were committed after the original arrest. In spite of a drop in arrests year to date, we’ve witnessed non-bail eligible felony arrestees get arrested more frequently and for more serious crimes,

The seven major crimes per the NYPD are murder and non-negligent manslaughter, rape, robbery, felony assault, burglary, grand larceny, and grand larceny of a vehicle.

Focus on Robbery and Burglary Arrestees

Looking specifically at the robbery and burglary arrests that benefit from bail reform provisions, we find:

There’s much more of that data which can be read here.

AOC was correct when she said the billion-dollar cut in the NYPD budget didn’t take effect yet, but she didn’t mention that in June, the city disbanded its Anti-Crime Unit.

When he announced the decision NYPD Commissioner Shea said:

“I would consider this in the realm of closing one of the last chapters of ‘Stop, Question and Frisk,'” Shea said. “I think it’s time to more forward and change how we police in this city. We can do it with brains. We can do it with guile. We can move away from brute force.”

Shea admitted that the decision is “not without risk” because the anti-crime unit’s work includes taking firearms off the street.

“Anti-Crime’s mission was to protect New Yorkers by proactively preventing crime, especially gun violence,” he said in a statement. “Shooting and murders are both climbing steadily upward, but our city leaders have clearly decided that proactive policing isn’t a priority anymore. They chose this strategy. They will have to reckon with the consequences.”

The police are operating with fewer people on the job. Between the killing of George Floyd on May 25, with 272 uniformed cops putting in retirement papers from then through June 24, the NYPD says. That’s a 49 percent spike from the 183 officers who filed during the same period last year, according to the department. Cops have grown increasingly frustrated by the lack of support from Mayor DeBlasio, and the mayor’s support of rioters and his anti-Cop statements in recent weeks have become the straw that broke the camel’s back.

Police Benevolent Association president Patrick Lynch said cops are “at their breaking point, whether they have 20 years on the job or only two. We are all asking the same question: ‘How can we keep doing our job in this environment?’ And that is exactly what the anti-cop crowd wants. If we have no cops because no one wants to be a cop, they will have achieved their ultimate goal.”

Between bail reform, fewer cops on the street,  and the disbanding of the Anti-Crime unit, the people of NYC are living with the consequences of horrible decisions of NY Mayor DeBlasio. AOC’s imbecilic rationale and fake statistics do not change the facts.

AOC will never appreciate all that the police do for NYC. But the late Paul Harvey does: